Toll Brothers (TOL), America’s Luxury Home Builder, reports their fiscal Q4 results tomorrow after the close. The options market is implying about an 8% one-day post-earnings move, which is shy of the average over the last 4 quarters of about 9%, WIth the stock near $33, the Dec 7th 33 straddle (the call premium + the put premium) is offered at about $2.65, if you bought that and thus the implied movement you would need a rally above $35.65, or a decline below $30.35 to make money on Friday’s weekly expiration.

Homebuilding stocks are some of the hardest hit in the U.S. this year, with TOL in particular down a whopping 31%, and down about 37% from its 52-week and post-financial crisis lows made earlier this year: 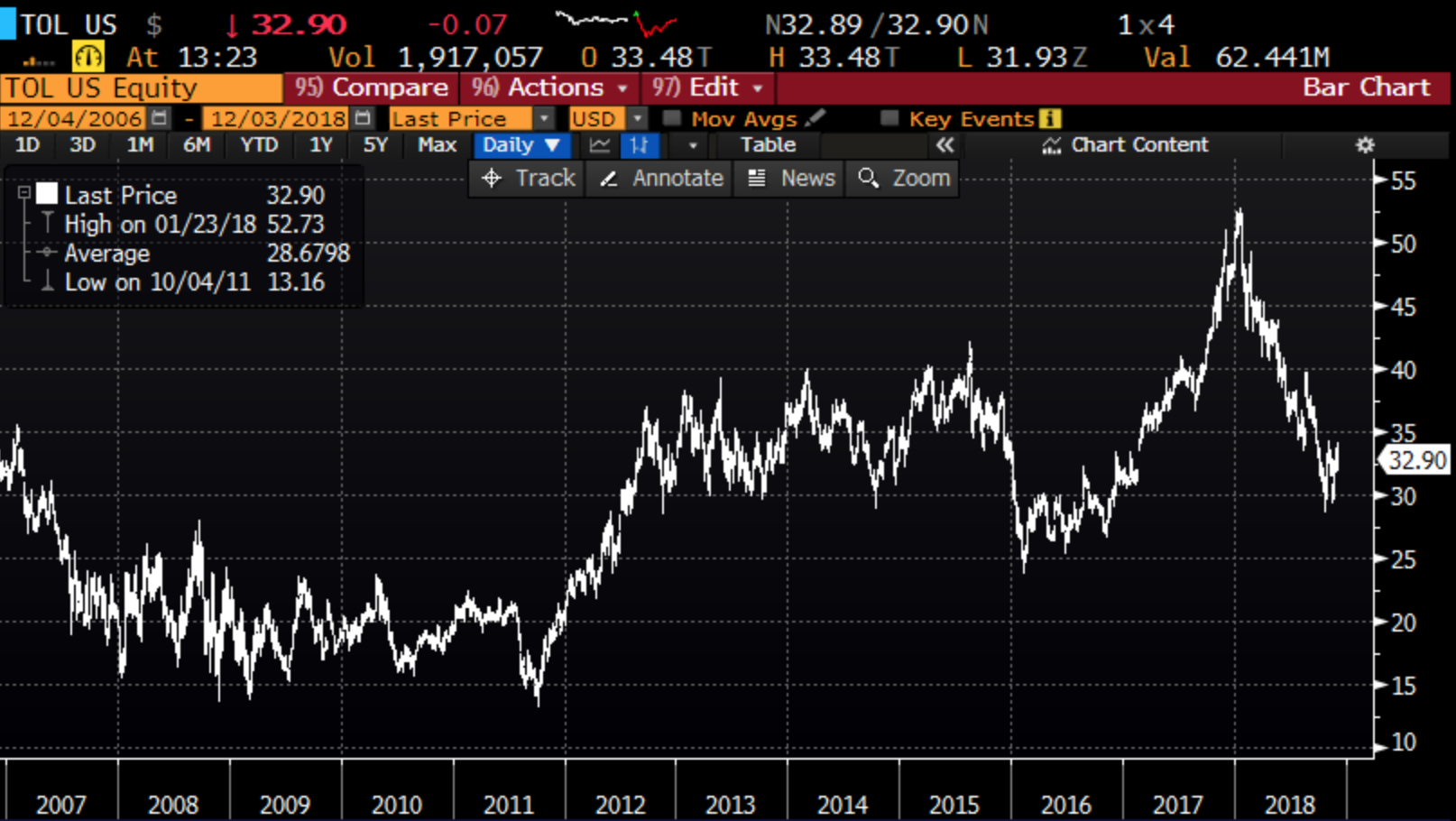 The one year chart below of TOL shows the stock’s recent bounce very near a technical inflection point, the intersection of the downtrend from the 52-week highs, and recent technical support / resistance level near $33: 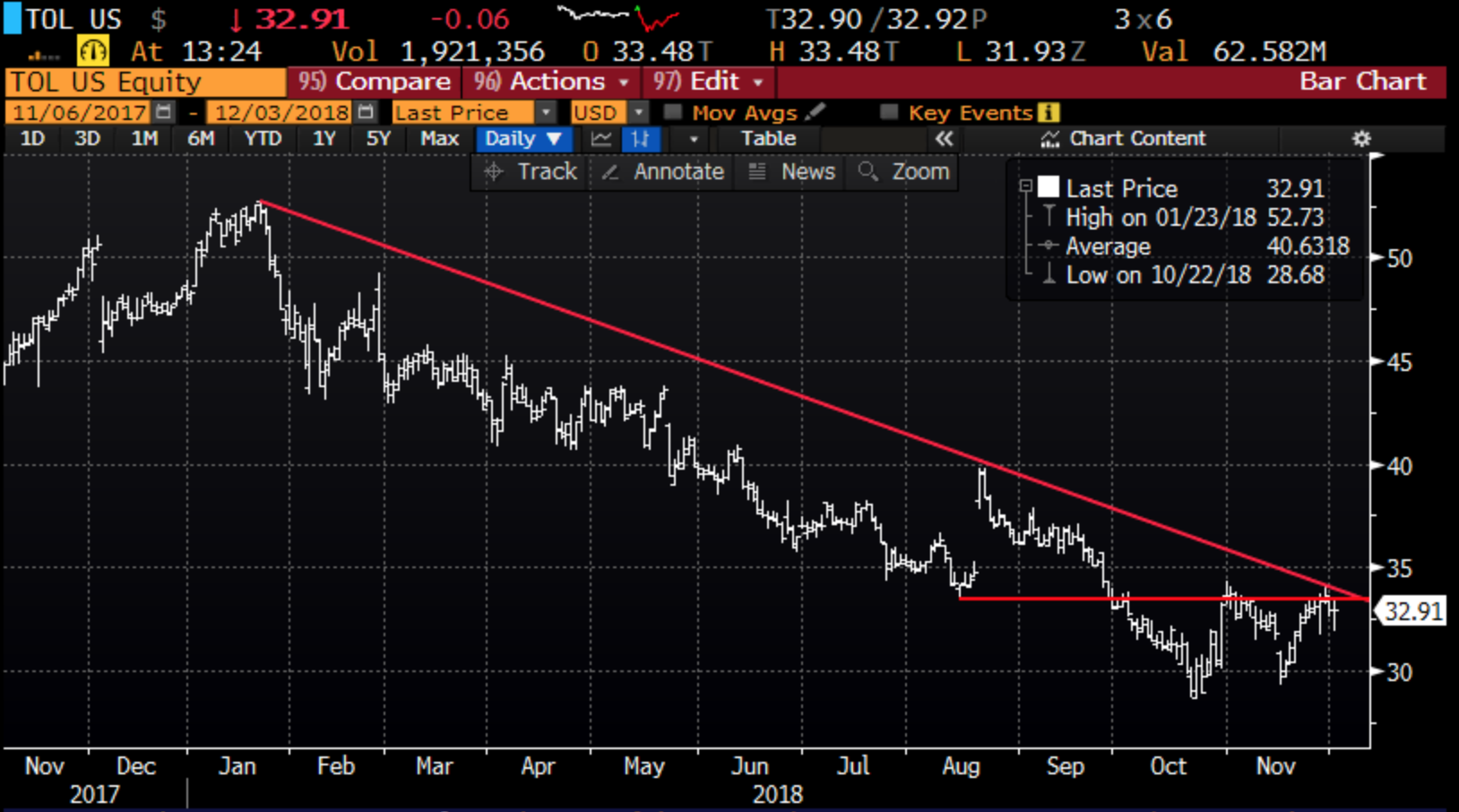 Sentiment in the group remains very poor, as this year’s rise quick rise in interest rates have caused the 30-year fixed mortgage rate to rise 100 basis points year over year from 3.7% to 4.7%, the highest level since 2011, which has resulted in significant weakness in New Home sales with inventory rising, per Reuters: 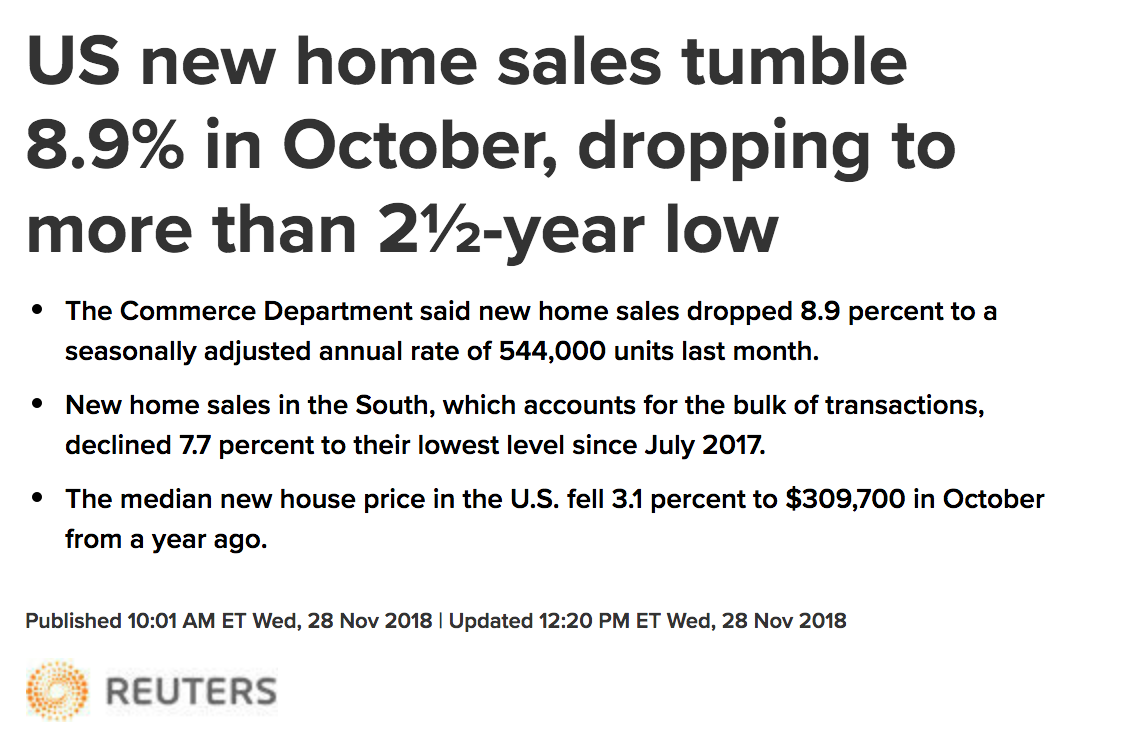 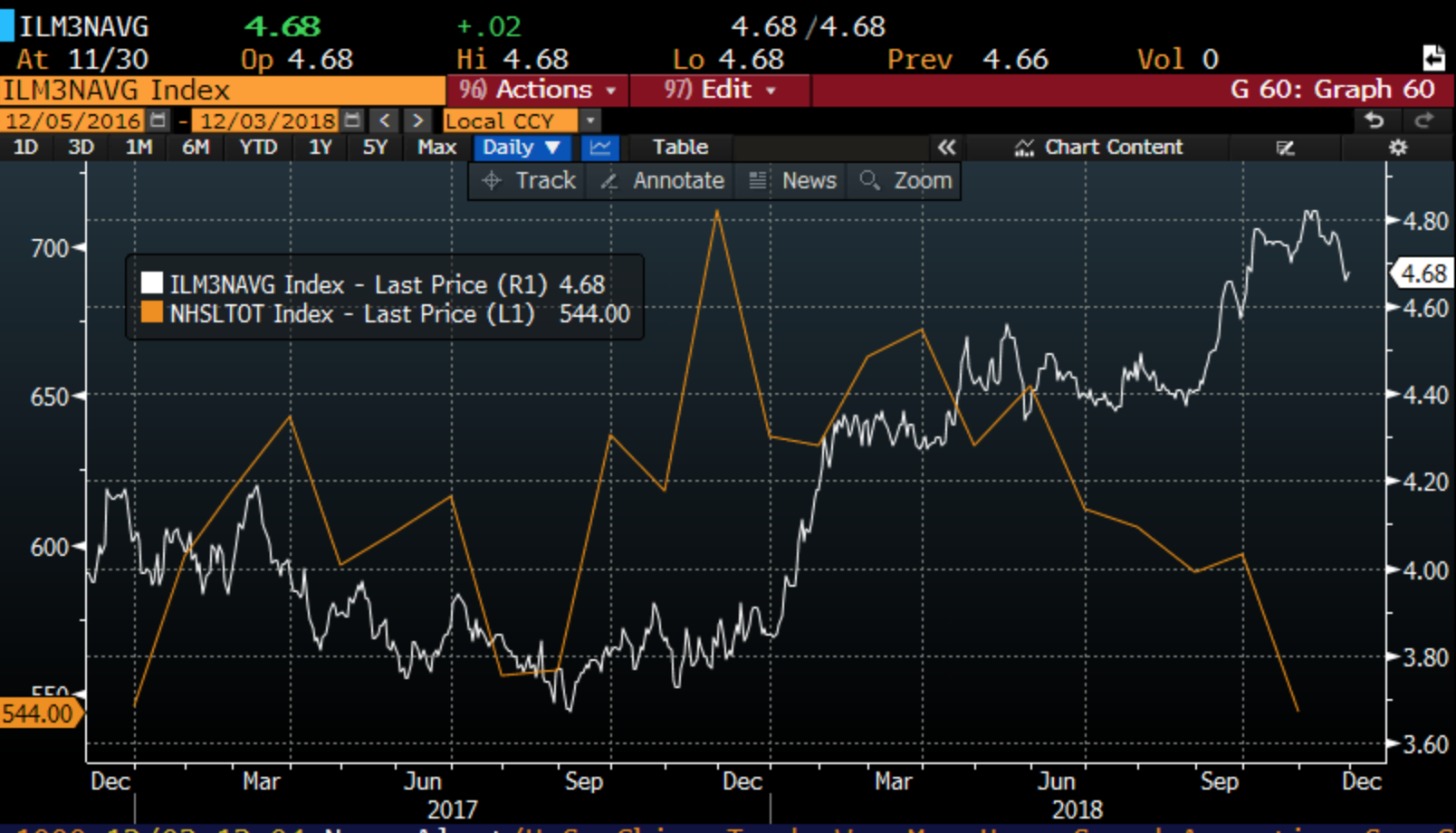 So the gazillion dollar question is… which way are rates going? Financial markets cheered last week as it appeared the Fed Chair is cognizant that pace of hikes might be a tad to brisk for what is a fairly fragile economy, despite the fact that we are at decades lows in unemployment just as inflation is starting to pick up in the 10th year of the longest economic expansion in 100 years.  The 10-year U.S. Treasury yield is trading below 3% for the first time in two months, down 25 basis points from its recent highs, which was also 5-year highs. The pull-back in the last month places the 10-yr yield at a fairly interesting technical level near prior resistance which was 2014 high, and the uptrend off of the depths of the 2016 lows: 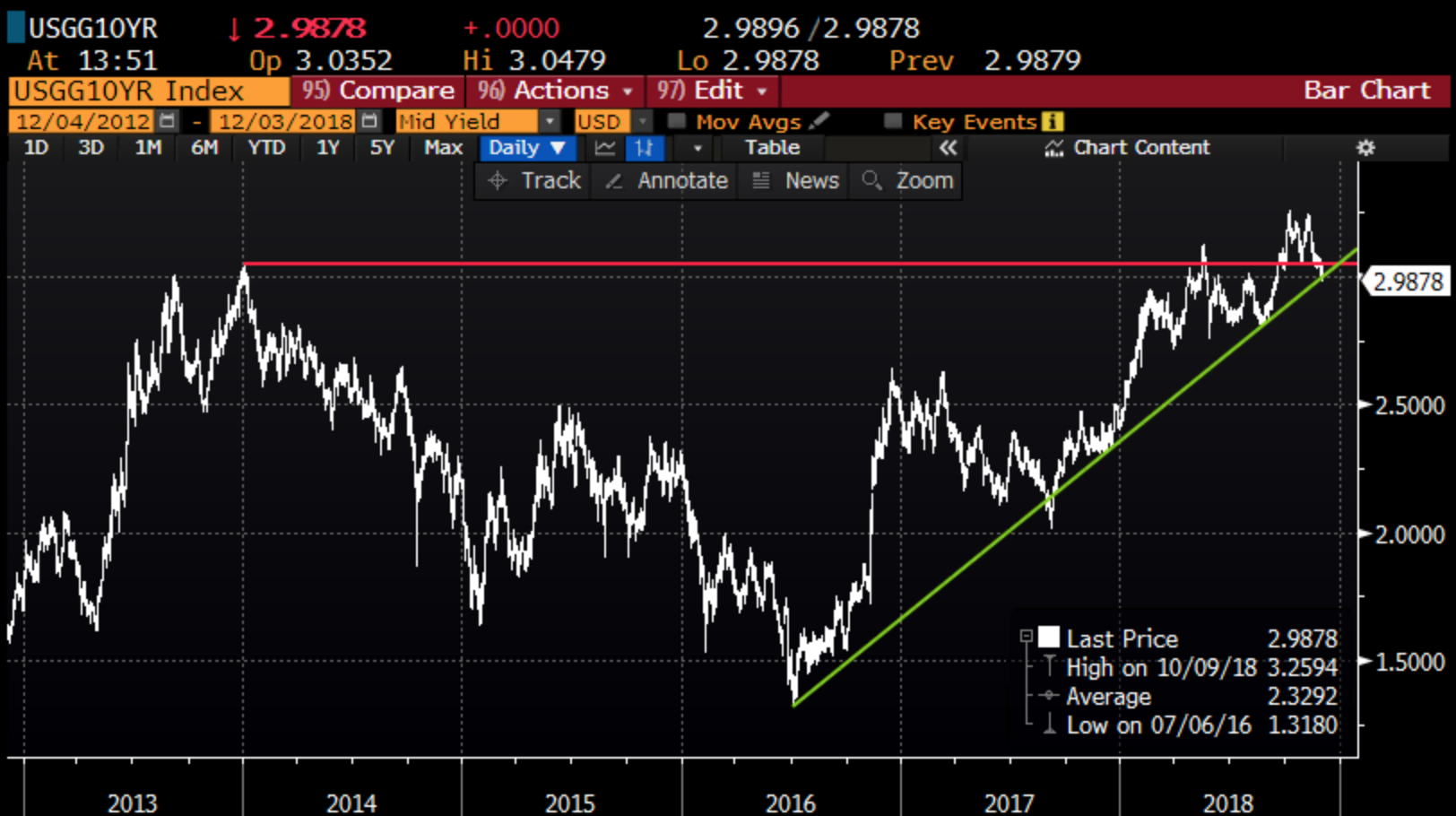 If rates we to go lower than it probably makes sense to bet on a rebound in new home sales, but that is a very complicated linguistics issue, specifically whether or not you feel that the term used by Fed Chairman Powel on Wednesday that sparked the massive stock market rally, that we are “just below” the target neutral rate” is significantly more dovish than his comment on Oct 3rd, that sparked the 12%, nearly two month decline in stocks, that we were ” a long way” from the neutral rate. Your guess is as good as mine, but I suspect we will get a good deal more clarity after the Fed sees the Nov jobs data this Friday and after the Dec 19th FOMC meeting.

As it relates to homebuilders like TOL, it might make sense to consider the research of Fund Strat’s Tom Lee, that I highlighted in a post last month (read here) that over the last 19 years homebuilders have outperformed the S&P 500 by 1290 basis points between Oct 20th and April 30th on average since 1999 and have gained on average 18.3%. Coming off of the horrid performance of late, and the very poor sentiment maybe Tom’s on to something, but I would also add that a stock like TOL is already up 16% from its 52-week lows made on Oct 23rd, while the ITB, the iShares U.S. Homebuilders etf is up 10% in the same period.

Given today’s gap on the trade truce, I think it makes sense to take a closer look at trade ideas tomorrow so we can see how we close and what the follow through looks like. But I wanted to frame the discussion today as Jeffrey Le\bowski, aka The Dude once said:

this is a very complicated case, Maude. You know, a lotta ins, lotta outs, lotta what-have-you’s. And, uh, lotta strands to keep in my head, man. Lotta strands in old Duder’s head.