Salesforce.com (CRM) is scheduled to report their fiscal Q3 results tonight after the close. The options market is implying about a 6.5% move in either direction or about $8.50, which is very rich to the 1.8% average over the last four quarters, but shy of its ten-year average one-day post-earnings move of about 6.5%. With the stock about $126. the Nov 30th weekly 126 straddle (the call premium + the put premium) is offered at $8.50, if you bought that, and thus the implied movement between now and Friday’s close, then you would need either a rally above $134.50 or a decline below $117.50 to make money. To put this quarter’s implied move in perspective from last quarter, the stock was trading $155 the day or Q2 results, and the Aug 31st weekly straddle was offered only at $6.50, or an implied move of ~4%.

Despite being down 23% from the stock’s 52-week and all-time highs made on Oct 1st, shares of CRM are still up 22% on the year, and up 10% from last week’s intra-day lows. The one year-chart looks very similar to that of the other high growth, high valuation tech stocks that have recently shared CRM’s correction fate, escalator up, elevator down: 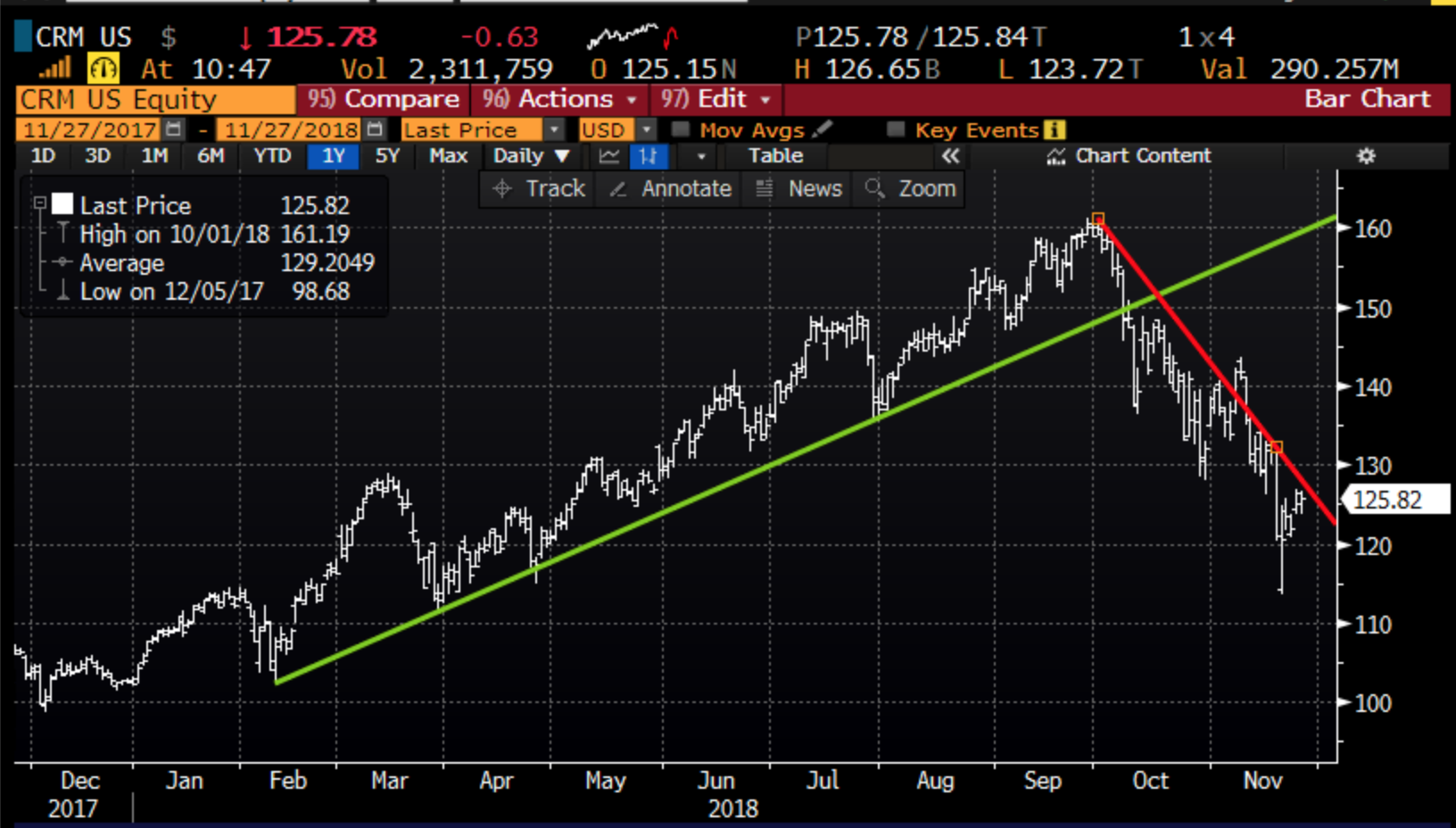 Even after the stock’s recent sell-off, analyst sentiment remains off the charts with 38 Buy ratings, only 4 Holds and No Sells, with an average 12-month price target of just below $173.

CRM trades about 46x expected eps growth (adjusted) of 9% in fiscal 2020 (next year), which is set to decelerate from 80% this year, while sales growth in fy2020 is expected to see deceleration to 20%, placing the stock at about 6x sales. For comparison sake, ADBE which sports a slightly higher market at cap $112 billion (vs $95 billion for CRM) trades richer an astounding 10.5x expected sales this year of $10.8 billion growing at an expected rate of 20% in 2020.

So what’s the trade? We are clearly in a shoot first and ask questions later mindset as it relates to earnings and guidance for stocks like CRM. I see a sort of one up two down scenario. Also, given the stock’s sharp decline over the last two months it would take a meaningful miss and/or guide down for the stock to be down in-line with the implied move, and a it would take a pristine quarter and guidance, and a stable broad market for the stock to go up in line with the implied move.

If I were looking to play for a miss and guide down I might use weekly options and play for the move this week, I might consider weekly put spreads, for instance:

Rationale: For those convicted that the company will miss and/ or guide down and the stock will re-test last week’s lows in the coming days, this trade idea offers a defined risk way to play for a $10 move in three trading days, risking 2% of the stock price to possibly make up to 6%.

Rationale: call spreads out a few weeks are not particularly attractive as options premiums are fairly elevated and short-dated call spreads in the weeklies obviously look more attractive given the lower premiums.