Shares of General Motors (GM) are trading up near 5% at 6-month highs after the following news hit the tape this morning, per Bloomberg:

Sadly, investors are cheering the move, as the cuts will dramatically improve cash flow next year, per CNBC.com, CEO Barra suggests that today’s job cuts:

can reduce annual capital spending by $1.5 billion and increase investment in electric and autonomous vehicles and connected vehicle technology because it has largely completed investing in new generations of trucks and sport utility vehicles. Some 75 percent of its global sales will come from just five vehicle architectures by the early 2020s.

Today’s bounce marks a 25% bounce off the two-year lows made in late October, but the stock is finding some technical resistance at $38, with what appears to be solid resistance at $40, a level the stock broke down from on two occasions this year in March and July: 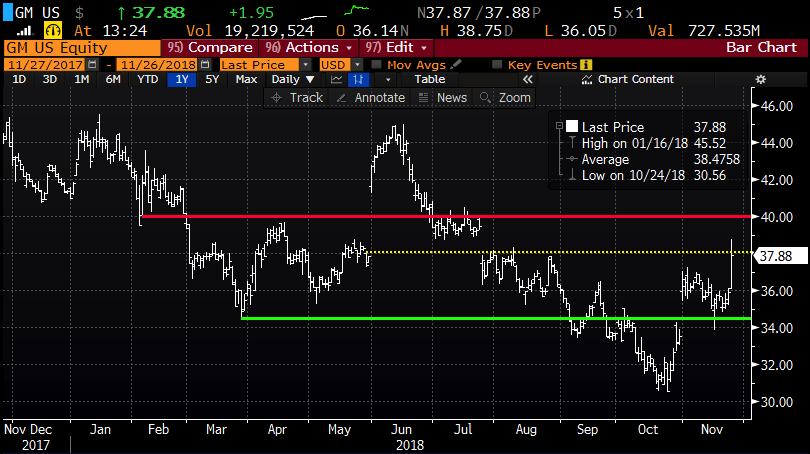 Options volume is running hot today with call volume nearly two times that of puts, with the largest trade of the day a buy of 7500 of the Jan 43 calls for 35 cents to open. If this is in fact and outright bullish bet it is a tough way to do it, unless it is merely leveraging an existing long position in the stock, as these calls don’t break-even till $43.35 up 14% from the trading level of $38, and they will not catch earnings which are scheduled for February 6th.

Back in April when GM was $38 I took a look at the stock after a couple upgrades from Wall Street analysts (read here) as they were considering a higher multiple for a company that is focused on competing in the Electric and Autonomous vehicle categories and de-emphasizing cars in favor of trucks. Today’s actions moves them closer to this vision of the company.

If I were inclined to play for a move back towards the 52-week highs just above $45 I might consider a call calendar, selling short-dated out of the money calls to help finance longer dated calls of the same strike. For instance:

The ideal scenario in this trade is that the stock moves lower towards the $40 level. On Dec expiration if the stock is 40 or lower the short Dec 40 call should be covered for pennies or will expire worthless and you will be left owning a March 40 call for $1.20. that should have a pickup in deltas off-set the decay over the last month. But this is dependant on how close the stock is to the $40 strike price. If it is in the same spot or higher than it is now, the March 40 call will lose on both deltas and decay.

The idea here is the sell shorted dated out of the money premium to help finance longer dated calls that will capture the identified earnings catalysts.

The worst case scenario is that the stock goes much lower, but the max risk of the trade is $1.20 in premium spent or about 3.2% of the stock price.

The best case scenario near term is that on Dec expiration the stock is $39.99, the Dec call expires, the March call is worth more than the $1.20 paid, and then you can turn the March call into a vertical call spread by selling a higher strike call in March expiration, further reducing premium at risk, while also improving the odds of success.