Shares of Facebook (FB) are down 40% from their all-time highs made in late July for some fairly well-known reasons, which I have written about them all year (read here), so I won’t rehash. Tim Seymour, my CNBC Fast Money co-panelist, who has been a bear on Facebook for some time now, has successfully argued in op-eds on CNBC.com (read here) that not only will the costs associated with securing their platform from bad actors, and securing their user’s data be a drag on earnings/profitability for quarters, if not years, its coming at time when a bi-partisan push for online data regulation will likely be a real possibility in 2019.

Last night on CNBC’s Fast Money program, Tim and I agreed on all as it relates to Facebook, but I asked a simple question, if you feel this way about Facebook, I am not sure how you could not extrapolate these same issues to Alphabet (GOOGL), who like FB gets a disproportionate amount of their sales (85%) from running ads, as Zuckerberg told Congress in April:

While investors might initially fear the uncertainty of government regulation of free ad-supported social networks and platforms, I think it is safe to say that it will be the very thing that the keeps the existing dominant platforms dominating for years to come. The costs for startups to comply may prove to be crippling to already profit strapped upstarts, and in fact, impede innovation and competition. For the purposes of this conversation, I want to focus on Twitter (TWTR) not GOOGL, as TWTR falls into a group of companies far closer to an upstart that might be far more impacted by potential costs associated with regulation than that of GOOGL.

When TWTR reported their Q3 results last month the stock rallied 16% the next day as investors were surprised by a revenue beat, fueled by advertising revenue that accelerated, with total sales rising 29% year over year. While there appeared to be some relief among investors, Mark Mahaney, RBC Capital’s star internet analyst, who rates the stock a hold with a $32 12-month price target highlighted some reasons for caution as we head into 2019:

3) Moderate Margin Outlook: Asked about headcount growth outlook for FY19, mngmt stated they don’t expect much to change in terms of priorities. Our interpretation is that EBITDA Margins can be flattish in FY19 – we had been concerned that a FB-like investment cycle might be upon TWTR, but there is little evidence of this.

The company blamed the decline in Monthly Active users of 9 million as a result from European regulation a huge canary in the coal mine for what could be about to hit the company in 2019 if the U.S. were to follow suit with tougher regs than GDPR. Also, the decelerating Daily Active Users does not portend well for ad rates and future growth, while their margin guidance might turn out to be optimistic at best if FB in 2018 proves to be any guide for how investors and analysts might re-price the risk to profitability.

Oh and this chart, it is a textbook head and shoulders top forming, with a neckline near $28 and no real support below to the low $20s: 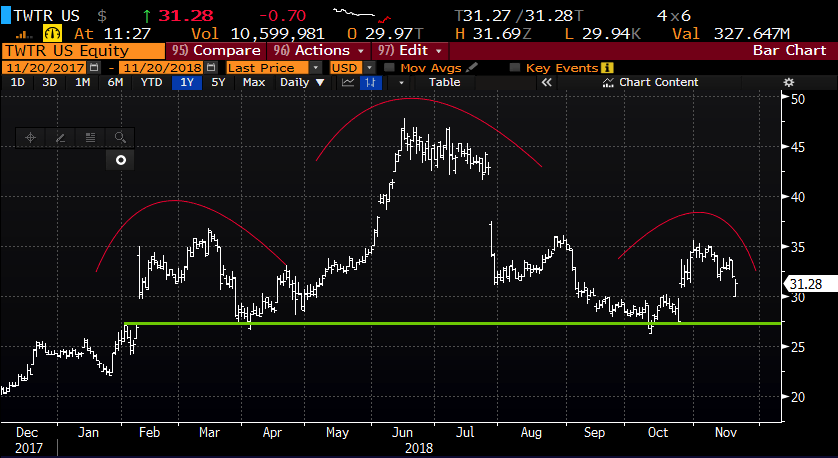 Some might call this a triangle or maybe a teepee of death: 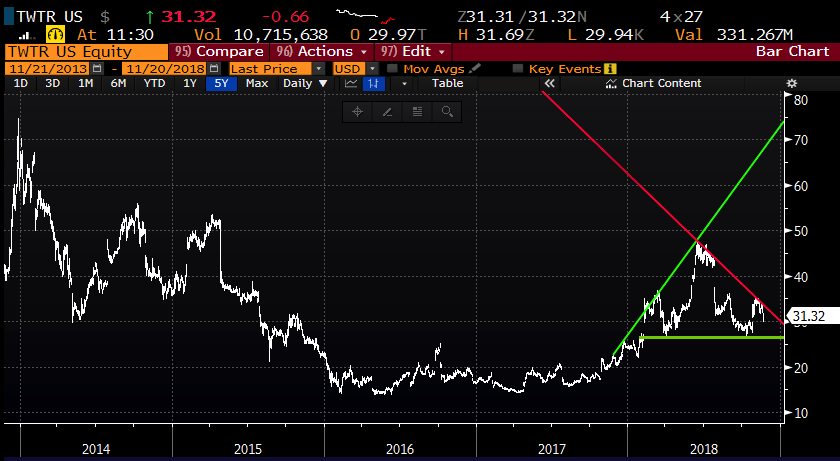 So what’s the trade? TWTR does not report earnings until Feb 7th, but I suspect the new Congress in January will start to make a lot of noise on regulation, which could continue to weigh on sentiment in the group. Any trades targeting a break-down below the neckline, and targeting the low $20s will need these catalysts. But options premiums are high, with the stock at $31.50 the Feb 31 put is offered at $3.20, or ~10% of the stock price. If you bought that you would need the stock below $27.80 on Feb expiration to just break-even.

If I were considering a move in the stock back towards support near $28 in the near term, and then a break below in the near year I might consider a put calendar, for instance:

The ideal scenario in this trade is that the stock moves lower towards the $28 level. On Dec expiration if the stock is 28 or higher the short Dec 28 put should be covered for pennies or will expire worthless and you will be left owning a Feb 28 put for $1.20. that should have a pickup in deltas off-set the decay over the last month. But this is dependant on how close the stock is to the $28 strike price. If it is in the same spot or higher than it is now, the Feb 28 put will lose on both deltas and decay.

The idea here is the sell shorted dated out of the money premium to help finance longer dated puts that will capture the identified catalysts.

The worst case scenario is that the stock goes much higher, but the max risk of the trade is the $1.20 in premium spent or about 3.8% of the stock price.

The best case scenario near term is that on Dec expiration the stock is $28.01, the Dec put expires, the Feb put is worth more than the $1.20 paid, and then you can turn the Feb into a vertical put spread by selling a lower strike put in Feb expiration, further reducing premium at risk, while also improving the odds of success.