This morning home improvement giant, The Home Depot (HD) reported Q3 earnings that beat consensus estimates and raised guidance for the current period. The highlights and commentary from the call sounded pretty optimistic, per Bloomberg:

-The world’s largest home-improvement chain showed off its ability to manage an income statement as earnings of $2.51 a share topped estimates for the 18th straight quarter, dating back to the beginning of 2014.

-The company signaled optimism for the rest of the year by raising its full-year sales growth forecast to 7.2 percent, up from its previous outlook for a 7 percent increase.

-Home Depot saw gross margin rise to 34.8 percent — the highest point in more than four years. It was still lower than analysts’ forecast of 35 percent, however, with higher
transportation and raw-material costs likely eating into profitability.

Optimistic commentary, but the stock can’t get out of its own way, down 2.3% as I write, but more importantly, HD is down 19% from its 52-week and all-time highs made in mid-September and quickly approaching key technical support. The point here is that expectations were clearly low and the company beats and the stock can’t rally?? 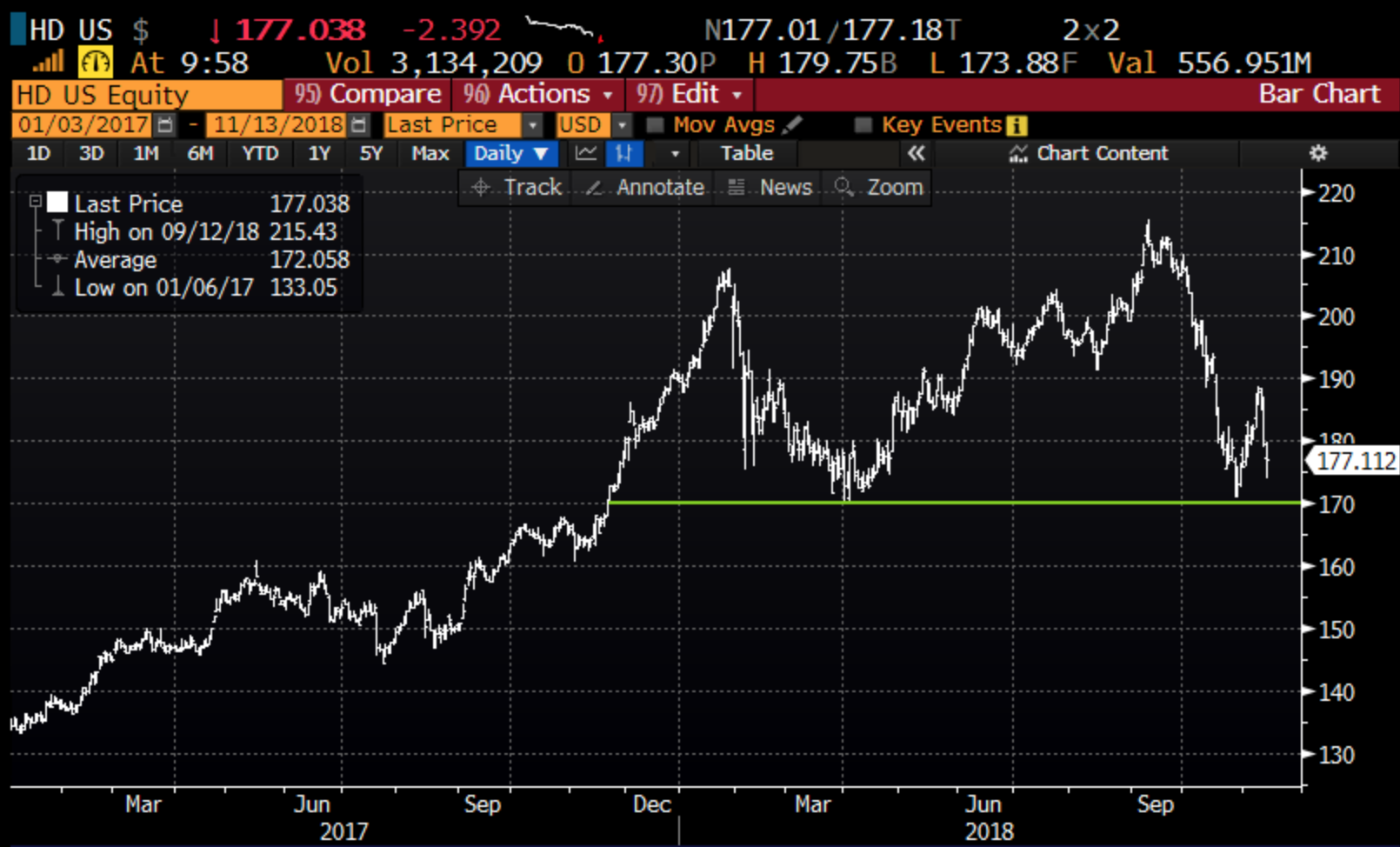 This is a huge week for retail earnings (Walmart, Macy’s, Nordstrom, TJ Maxx to name a few)and what’s most important is likely the outlook for the current period that will include the holiday season where most of these stores and brands make their years. Which brings me to Walmart (WMT) which reports Q3 earnings prior to the open on Thursday, the options market is implying about a 5% move in either direction, which is shy to the 4-quarter average of 8%. WMT has oddly been a big mover over the last year post-earnings, with three one day moves of about 10%! 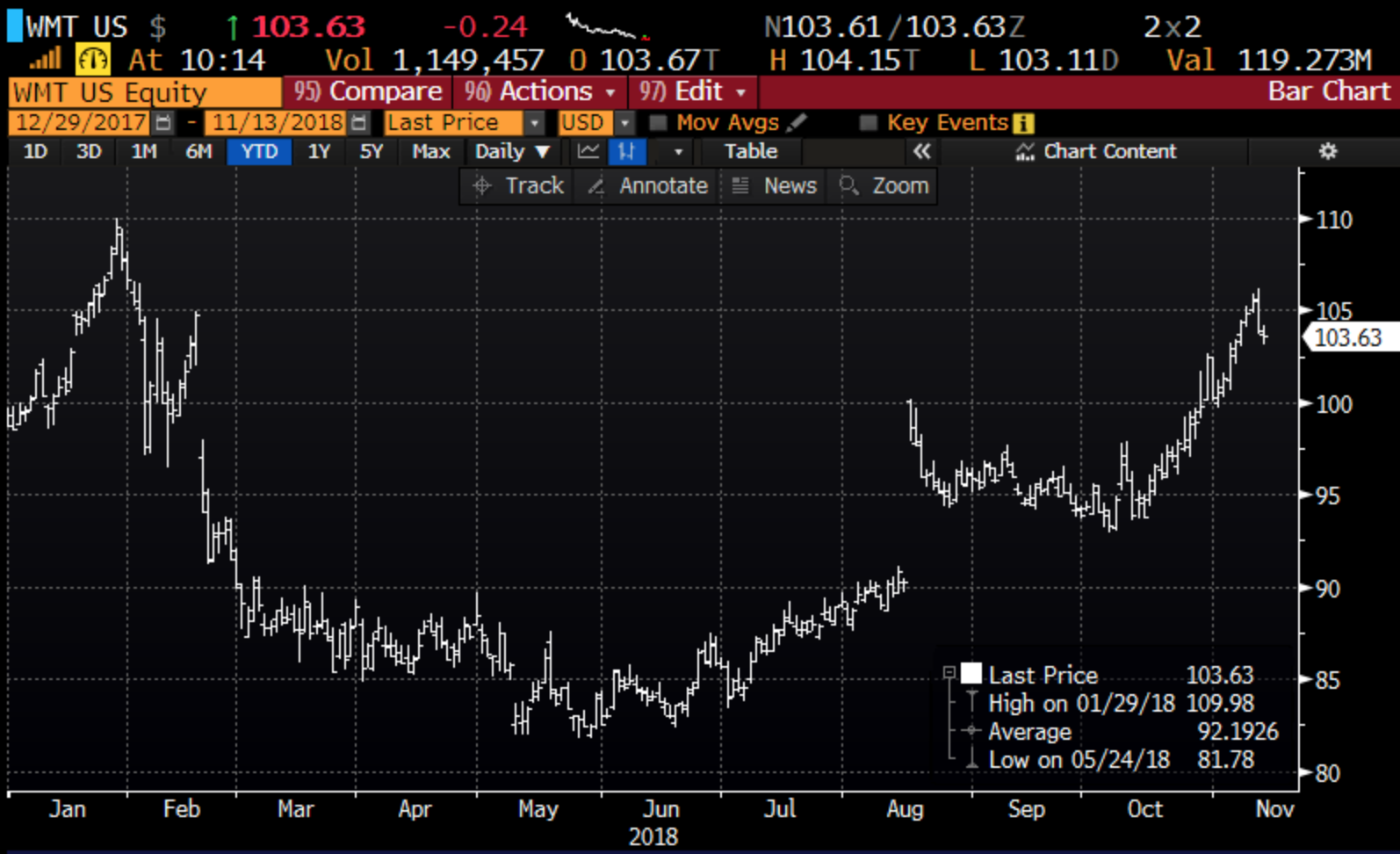 My co-panelist on Options Action on CNBC, Cornerstone Research’s Carter Worth, detailed a bullish view from a technical standpoint, seeing the stock retaking the prior 52-week and all-time highs made in January (watch here). Maybe we see a run back to the prior high on a beat and raise, but after the stock’s 10% rally in the last month, as the broad stock market has sold off 10%, I would say we have the exact opposite set up to HD, detailed above where expectations were low, and despite the company delivering on earnings and guidance, and the stock still can’t rally. What do you think would happen to WMT if they were to miss and guide down?? I think it is important to remember that WMT’s largest retail competitor Amazon (AMZN) guided Q4 below consensus when they reported last month and the stock got nailed.

To go along with Carter’s bullish call, my other co-panelist Mike Khouw detailed a defined risk way to play for new highs, simply buying an in the money call in Jan… when the stock was $105.60 buying the Jan 105 call for $3.80. This trade breaks-even at 108.80 on Jan expiration. Risking about 3.5% of the stock price to play for a move above the prior high of $110 in the next two months. Viewers of the video will get the vibe that I was not digging this trade idea. Largely because I don’t like the risk-reward, in this market I think it is very unlikely that a stock like this, that has already had a nice run into the print surprises to the upside, retakes the prior highs and keeps going. So risking 3.5% for that outcome seems like a low probability outcome imo. 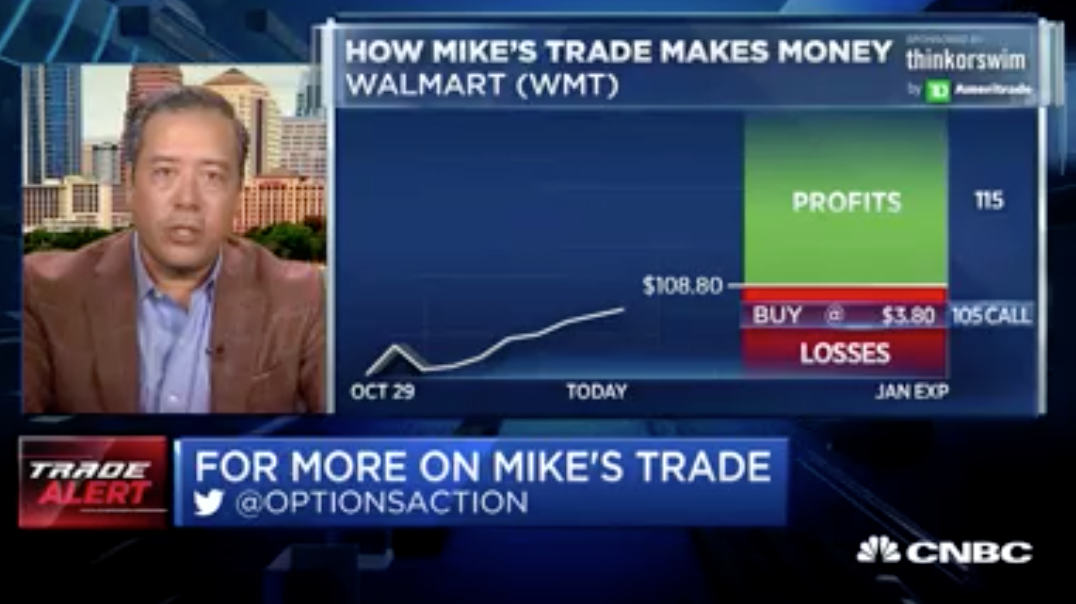 So what’s the trade? If I were inclined to play for a disappoint I would look to buy weekly put spreads targeting the implied move of 5%, which appear dollar cheap… for instance…

Rationale: this trade idea risks 1.5% of the stock price, has a break-even down only 1.5%, and a max payout of 3x the premium at risk down 5% in line with the implied move.