At one point in the not too distant stock market past, video game stocks were trading at all-time highs, despite the overwhelming success of upstart Epic Games’ juggernaut Fortnite. Well in the last month or two, the threat of multi-player phenoms and e-sports have taken their toll on the established players, with the stock’s of EA and ATVI in full on crash mode, down more than 20% from their recent 52-week and all-time highs.

Yesterday ATVI got hit to the tune of nearly 7% on unfavorable reviews of Diablo Immortal, per Bloomberg:

The new “Diablo Immortal” mobile offering fell short of some fan expectations for the popular desktop games. Players lashed out on Twitter and in the comments section of the YouTube trailer with the hashtag, #NotMyDiablo. There’s even a petition on change.org to cancel the launch that has over 31,000 supporters.

This announcement came after what appeared to be disappointing sales of ATVI’s flagship shooter game Call of Duty last month. Speaking yesterday to Wedbush Securities gaming analyst Michael Pachter, who rates the stock a Buy with a $100 twelve month price target,  suggested that the stock’s reaction might be a tad overdone to gamer reaction to “Diablo”, but intimating it was kind of an unforced error, stating:

“They used a hardcore fan convention to debut a mass market game. It’s like McDonald’s unveiling healthy salads at a meat convention. What did they expect the reaction to be?

The stock’s volatility over the last month, since making a new all-time high on Oct 1st, and punctuated by yesterday’s 6.8% drop (nearly a 25% peak to trough decline) makes for an interesting set up into Thursday night’s Q3 report. The options market is implying about a $5 move in either direction or about 8%, which is fairly rich to the average 3% one-day post-earnings move over the last four quarters.

While expectations for a beat and raise have clearly come down since the start of October, the stock’s decline has made the valuation look a bit more attractive, despite the fact the stock still trades at PE/G (PE to eps growth of about 2) for 2019, and 6.5x sales, not exactly cheap for a $50 billion market cap company who’s expected eps growth is decelerating to 11%.

All that said, my guesses…  anything short of a miss and guide down and the stock stabilizes near 2018 lows… if the stock was to miss, and guide down, well long holders better strap-in given the market we are in…  a beat and raise and the stock is back at $70 in line with the implied move.

Taking a look at the one year chart of ATVI and you can see that the stock has found support near $63, the 2018 low from Q1: 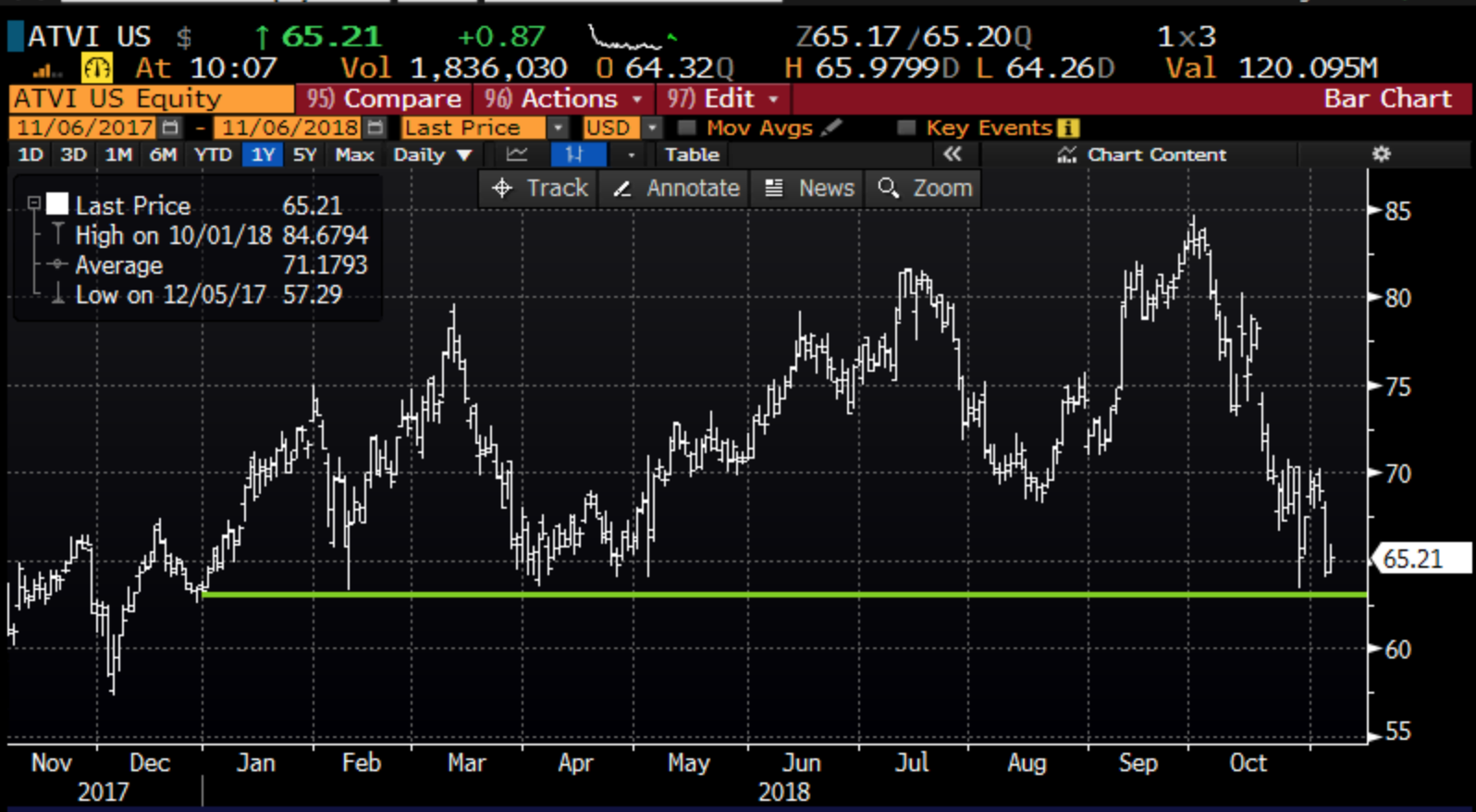 While the two-year chart clearly shows the recent breakdown below $70 a problem for the two-year uptrend that had at one point yielded more than a 100% return: 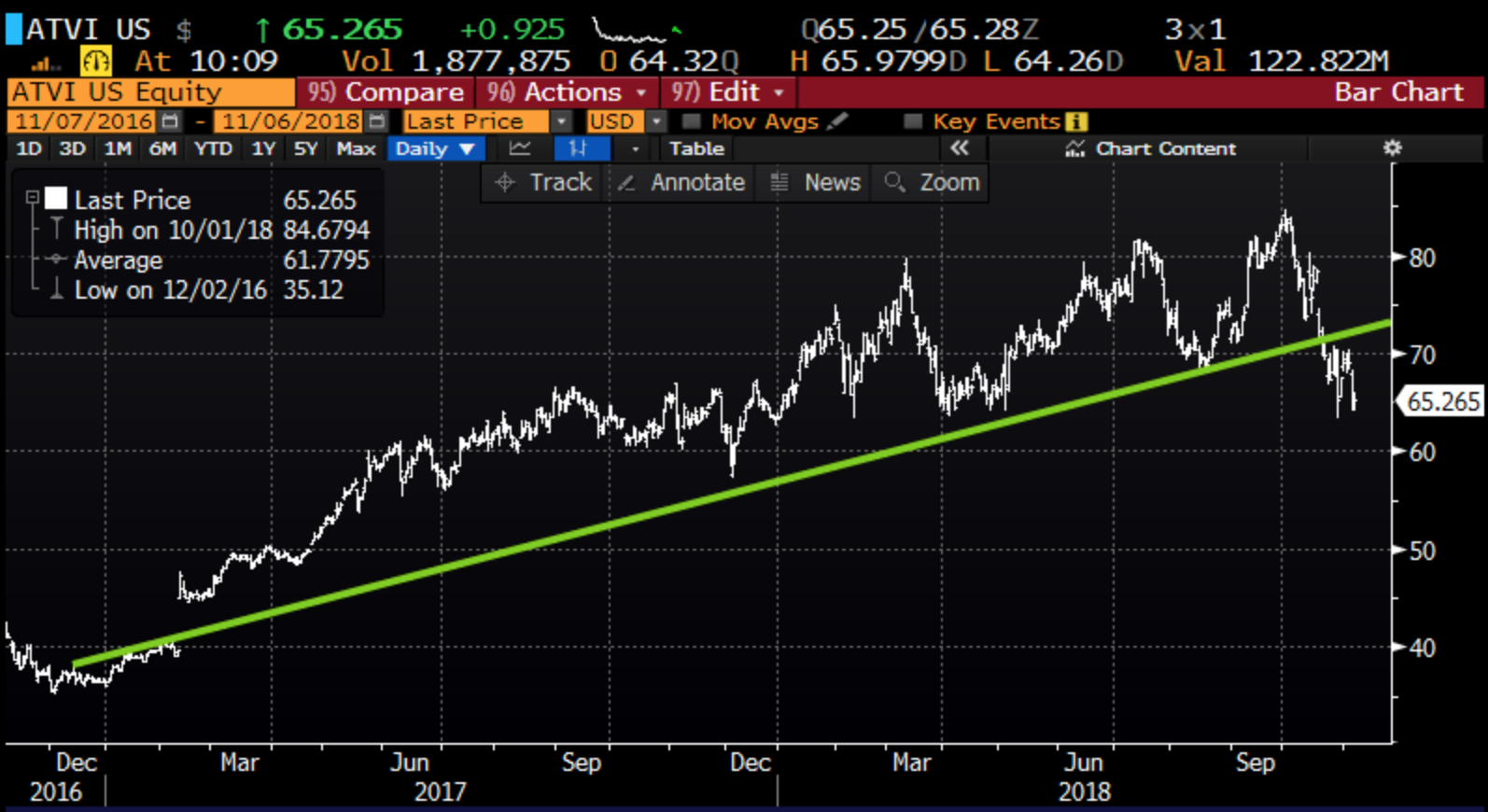 The precarious technical set-up into the print does point to the use of defined risk strategies for those looking to express a short-term directional view. I am not sure I can be too helpful on an outright bearish trade as it feels like a bit of a press on the short side. But longs who have been in the stock, don’t want to sell now down 20% in a month might consider collars… for instance..

Profits of the stock up to 70, stock called away at 70 but long holder could always cover the short call to keep the long position intact.

Losses of the stock down to $60, but protected below.

Rationale: one would collar a long stock position into a potentially volatile event if they first and foremost did not want to sell their long stock position, but were worried about the potential for extreme short-term downside into an event like earnings. Most importantly, they are willing to give up some potential upside to have defined risk to the downside.

Or If I were looking to play for a stabilization, and maybe a sustained bounce into the new year, I might consider looking a bit out of the money given the stock’s sharp decline in just the last month and target a move back towards the Oct highs but giving some time to playout…

Rationale:  This trade is a bit of a longshot, but given how expensive short-dated options prices its hard to risk 4ish percent for a near-dated at the money call, and vertical spreads don’t look th at attractive from a risk-reward standpoint. If you believe the stock has been caught up in the high valuation / high growth sell-off, and that fundamentals of the stock are not being adequately represented near term, then this out of the money call spread risks 3% of the stock pricce over the next two and half months playing for a move back near the Oct 1st highs.