Regular readers know that I look at charts as one input when evaluating a trade set up, it is more likely to be the last on a list, that usually starts with a potential catalyst, quickly moves to fundamentals, comparative valuation, sentiment, and then the chart to help inform strikes of an options trade. But during earnings season, I will usually scroll the list of stocks that are set to report and start with the chart to see which stocks have a had big moves of late and where they are relative to their prior earnings report just three months ago. One reason for this ass-backward approach is that there are dozens of reports that I would like to look at during the meat of earnings season on any given day and while looking for stocks that are likely to move greater than expected post results it is either those who continue with an already obvious trend, or those that are likely to reverse a recent dramatic move.

One such name that reports tonight is semiconductor commitment manufacturer KLA-Tencor (KLAC). The options market is implying about an 8% one day more tomorrow, which is shy of last quarter’s 10.5% one-day rally post fiscal Q4 results on July 31st, and well above its long-term average of only about 3.5%. A quick gander at the one year chart and it looks like the Q4 report was going to be the catalyst for a breakout of the one year range between $80 and $120: 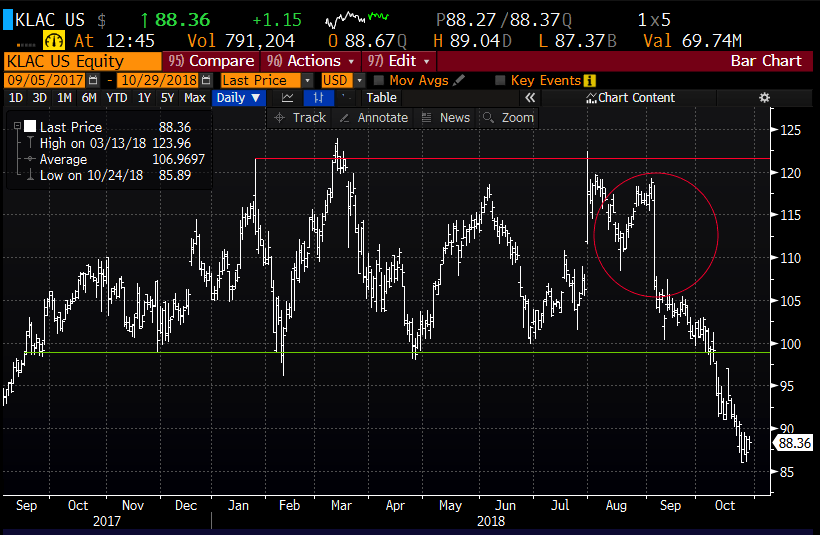 “Feels like [December quarter] will be up a little less than what we thought [due to the DRAM market],” he said at the Citi 2018 Global Technology Conference in New York, according to a FactSet transcript. “So, on the margin, modestly weaker, I think trajectory wise in the way we had laid it out [six weeks ago].”

The stock broke its 2018 lows earlier this month and is just in the last week as the broad market remains weak trying to put in a near-term bottom. The five-year chart is quite interesting. When the stock broke below the uptrend that had been in place from the 2015 lows, it resulted in a drop of more than 10% in a straight line, nearly back to what should be long-term support near $85, the early 2017 breakout level: 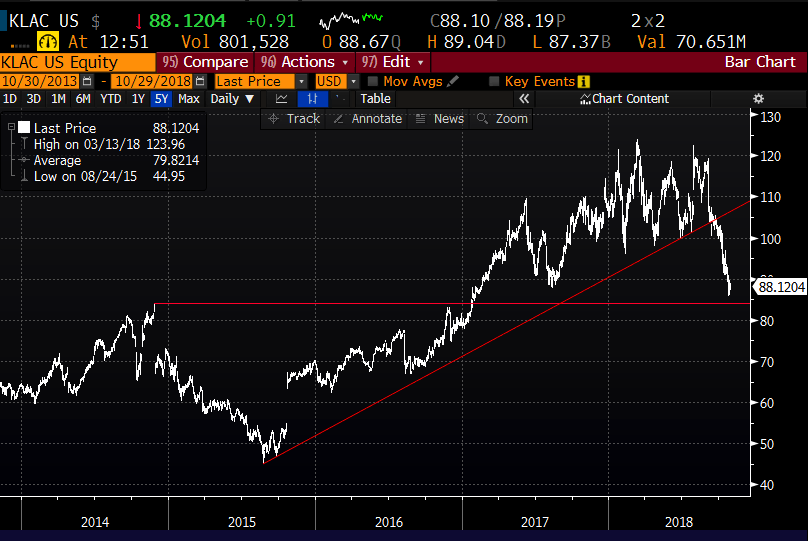 So I guess the question here is whether or not investor sentiment overshot to the downside following the “soft-guide” the company gave in early September. For the stock to trade meaningfully lower this week it would take a miss of the quarter just ended and a material guide lower of fiscal 2019. I would also add that consensus eps estimates for Q1 to be reported tonight are well below the sort of growth exhibited on the last three Q1s, which have ranged from 51% to 63% year over year growth. Consensus for the Sept quarter is calling for just 23% yoy growth, with the balance of FY2019 a material step down in eps growth, per Bloomberg:

The stock near 52-week lows, trading just 10x expected 2019 eps growth of 10% seems reasonable for a cyclical name like KLAC.

My Take into the print: It appears to be a hard press on the short side for a company that has lowered expectations, trades just 3x sales, with a solid balance sheet, pays a dividend that yields 3.4%, has a buyback program to the tune of $2 billion ($13 billion market cap) and has been in the M&A mix. All that said I see little reason for optimism as it relates to the semiconductor cycle given the current perceived slowdown in global growth and the disruptions being alluded to from the trade spat with China, despite optimism that the U.S. tax cut last year would lead to increases in capital spending. But if the company were to post a mild beat and slight raise, or maybe even just reiterate current quarter and ful year guidance, then KLAC could be testing the $100 breakdown level in the coming weeks. 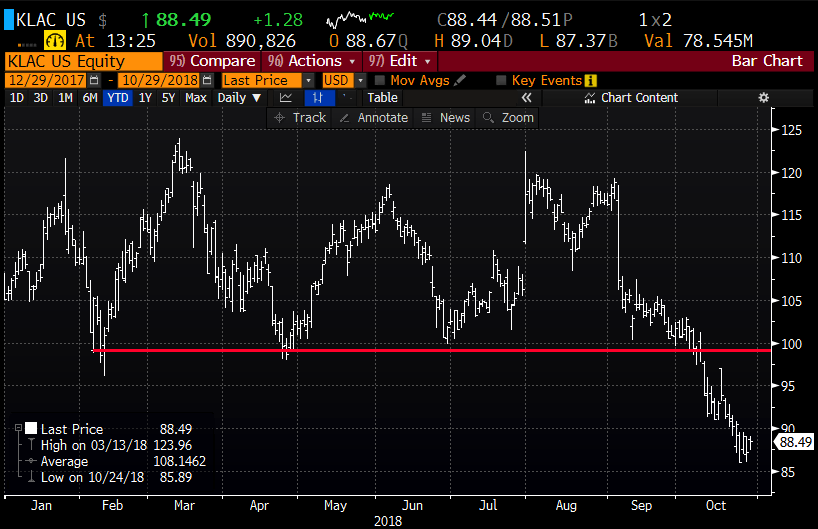 So what’s the trade? Was the Sept 6th guidance a sort of canary in the coal mine for semiconductor capital equipment spending?? Maybe, but given stocks like KLAC’s weakness into earnings it seems like a dicey press on the short side. For those who think this might have been a pause in cap spending, and were encouraged by Intel’s results last week, then a defined risk contrarian trade with a healthy risk-reward ratio in a beaten up name like KLAC might make sense… for instance…

Rationale: Options prices are expensive into the print, this trade idea targets what looks to be formidable technical resistance in the next week 6 weeks into a potentially volatile event. This trade idea offers a very wide range of profitability to the upside while risking 2.25% of the stock price to possibly make up to 9%.