Microsoft (MSFT) will report their fiscal Q1 earnings tonight after the close. The options market is implying about a 5.5% move in either direction which is rich to its 2.6% average one-day post-earnings move over the last four quarters.

Shares of MSFT, up 23% on the year are massively outperforming the S&P 500 up 1.5% and the Nasdaq, up 6%. The stock is nearly in the exact same spot where it was on July 19th prior to its FQ4 report, but down about 10% from its all-time highs made earlier in the month. The one year chart below very clearly shows near-term technical support at $105, a level it has bounced from on three occasions since breaking out above in July, which also happens to be the intersection of the one-year uptrend, which it has held like a boss: 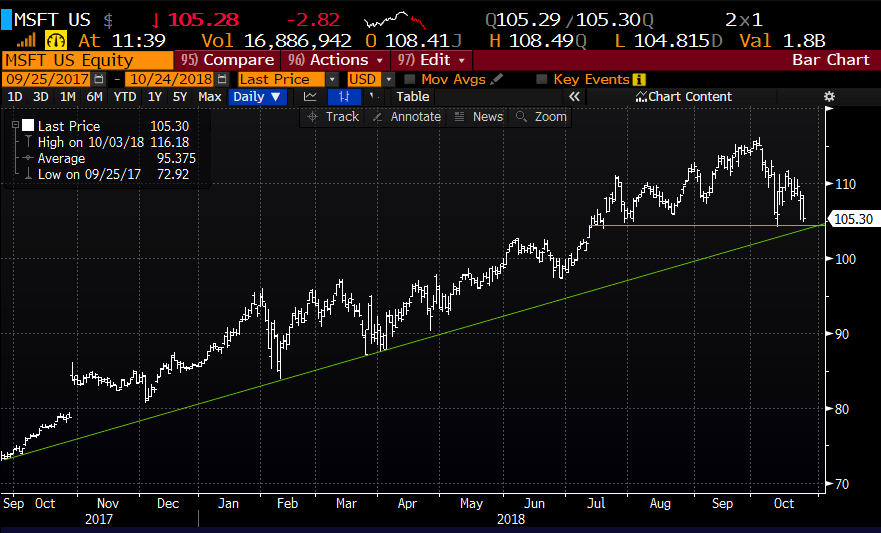 Shares of MSFT trade at about 25x expected fiscal 2019 eps growth of 11%, not exactly cheap, I but I would add that analysts also expect sales to grow double digits, equal to its EPS growth, which is pretty impressive for a company who booked $110 billion in sales in fiscal 2018.

When the company reports tonight I suspect that the current quarter should be at least inline, but I would add that semiconductor weakness is very likely to speak to a slowing commercial PC (despite 2018 being better than expected) and server environment, which could weigh on forward guidance. If the company were to guide fiscal Q2 flat with expected 96 cents for Q1, and would be flat year over year, I would expect the stock to be down at least in line with the implied move of about 5.5%.

Here is the thing, Wall Street analysts are overwhelminly positive on the stock with 34 Buy ratings, only 1 Hold and 2 Sells. Most analysts are looking for a beat and raise. If you were to get a beat and raise it is likely that you see the stock up in-line with the implied move, but in the current market environment, where stocks like MSFT which are so big, and outperform so much, It will be hard to find the incremental buyer to push it back to new highs until the market stabilizes. So i think you have a one up, two down scenario. I they miss and guide down the stock is likely down 10%.

If I were long and looking to hold on, but fear a sharp drop more than a sharp rise, I might consider a collar… for instance….

Profits of up to $7 between current levels and the short call strike at 113, stock called away at 113. but if stock there or higher can always cover the short call to keep the long stock position in place.

Rationale: want to hold the position but fear a sharp move lower after earnings, willing to give up some potential upside for some downside protection.

If I were inclined to play for a bounce I might consider a call calendar, playing for a near-term bounce and then consolidation and then a rip into year-end after some of the market volatility abates…

The ideal scenario is that the stock rallies towards $110, the short call expires worthless and you own a Dec 110 call for $2 which has likely increased in value as it has picked up some deltas. At that point I might look to sell a higher strike call in Dec and creat a vertical call spread further reducing my premium at risk.

Or If I were to play for an outright miss and guide down I might consider:

Rationale: this is not exactly a high probability trade, the options market is only saying that there is a 25% chance this trade breaks-even to the downside at 101 and only a 14% chance the trade is at it max gain at 98.

Rationale: one would only do an out of the money, long premium, near dated trade into an event like earnings unless you are very convicted.