Tomorrow morning before the U.S. stock market open Deutsche Bank (DB) will report their Q3 results. The options market is implying about a 6% move in either direction. 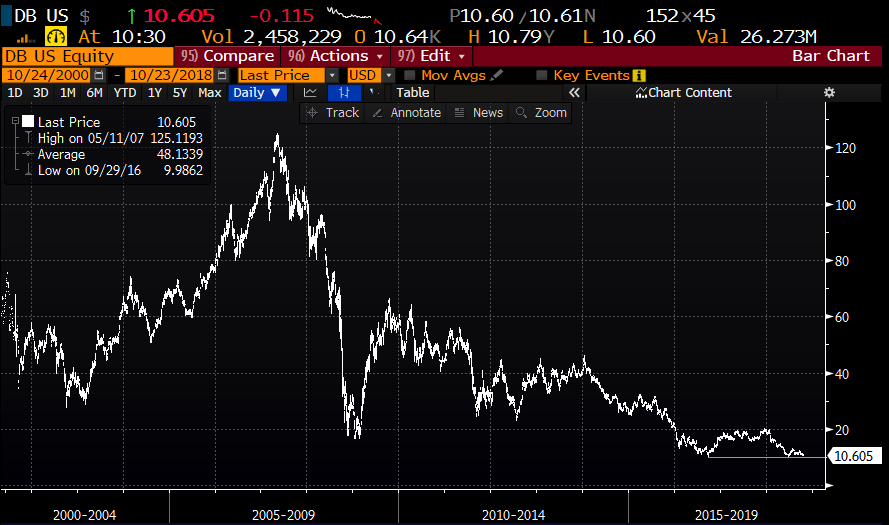 Sentiment on the stock could hardly be worse with only 3 analysts who rate the stock a Buy, 13 as a Hold and 17 as a Sell. I am hard pressed to find an equity the world over with a greater than $20 billion market cap so hated by the analyst community. Despite the stock’s weakness and the fairly well known fundamental issues, short interest is less than 5% of the float. One reason for this is that investors might have on top of mind the potential for a forced merger (as has been rumored with German peer Commerzbank) depending how much pressure they face as the European banks are shaken by disruptions with the UK’s Brexit plans, and Italy’s budget problems which has put dramatic pressure on European banks as a group. The Euro Stoxx Bank Index (SX7E) which is today making new two-year lows, is down 26% year to date, and down 33% from its 52-week highs made in January. The index appears to have solid long-term support down about 15% from current levels: 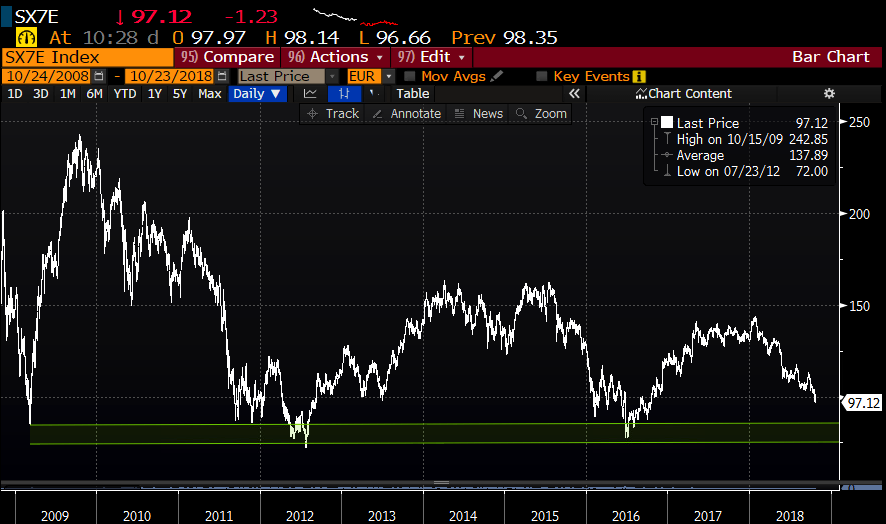 And its obviously not just European banks getting hit, the XLF, the etf that tracks the U.S. bank stocks today broke down below 1-year support at $26: 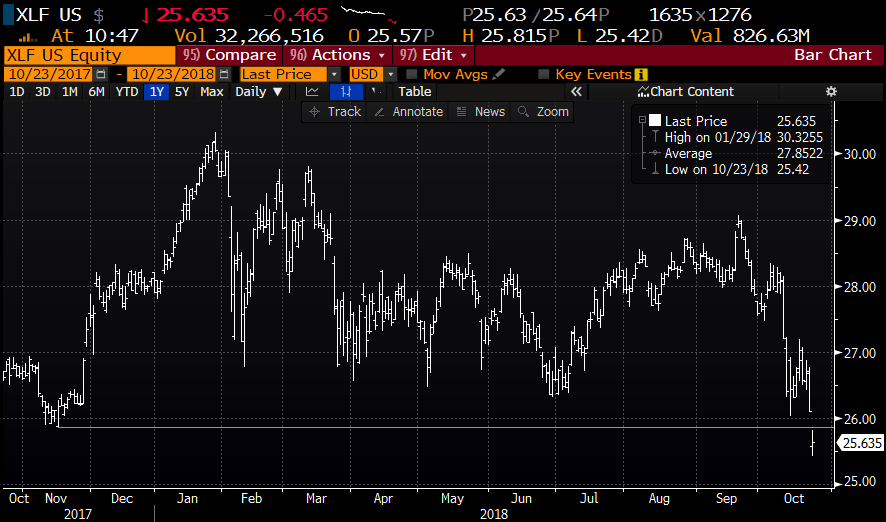 Regular readers know that I have not been a fan of owning banks all year (here) since the Jan highs, the banks have underperformed the broad market, despite the supposed benefits of the tax cuts implemented in late 2017, continued deregulation by the current administration, a supposed booming U.S. economy with the backdrop of lower unemployment, wage growth,manageable inflation and rising rates to assist net interest margins. If bank stocks could not rally here in the U.S, in that regime, I am not sure they will again for some time.

Now back to DB, with all that said, it is clear I am not a buyer of banks stocks, but don’t think they are a good press on the short side here either. But if I were inclined to play for a directional move post-earnings, the at the money put or call are dollar cheap, with the stock at 10.67 the oct26th weekly 10.50 call which is 17 cents in the money is offered at 37 cents and the Oct 10.50 put is offered at 25 cents. If you had a view that the stock could move 10% in either direction by Friday’s close, that would be the way to play for a trade.

If you had a directional view but wanted to give it a bit more time, so the trade is less binary if you got the initial direction wrong, then call or put spreads in Nov expiration look attractive… for instance:

The rationale for both trade ideas is fairly simple, if looking to pick a direction, long premium trades look dollar cheap, risking 3% to possibly make 10% with the backdrop of no shortage of market-moving news over the next month.