On Wednesday I detailed my near-term bearish view on the Nasdaq 100, specifically the 4 or 5 stocks that make up a disproportionate amount of the index’s weight, read below. I wanted to quickly update this view for those coming to my way of thinking a couple days later with the QQQ, the etd that tracks the NDX down a couple percent since… here are my notes for what I will be discussing on Options Action on CNBC today at 5:30 pm eastern. 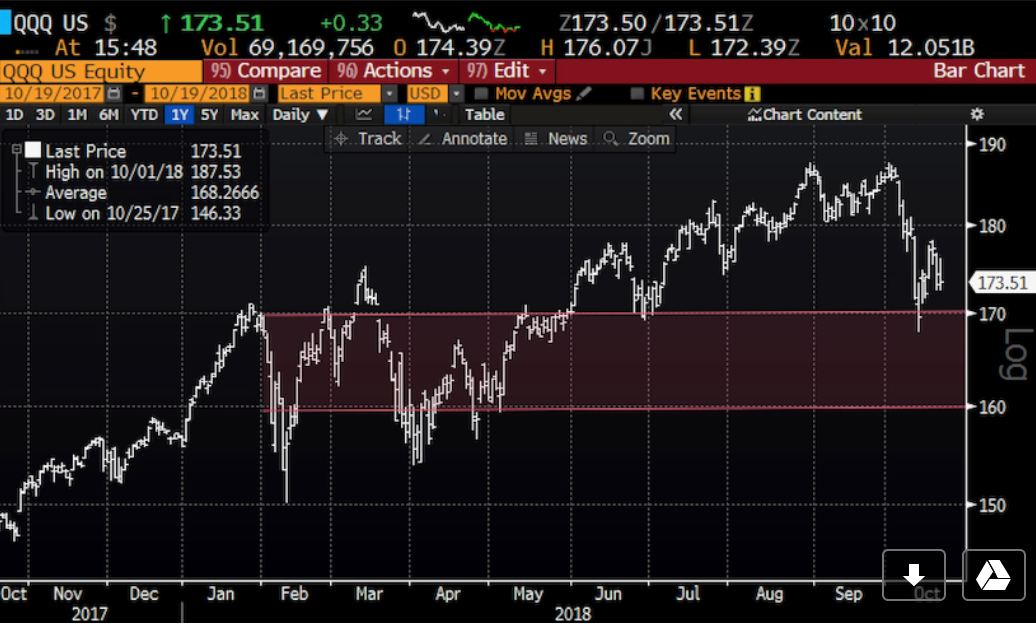 And wow, that 3-year uptrend is in jeopardy… 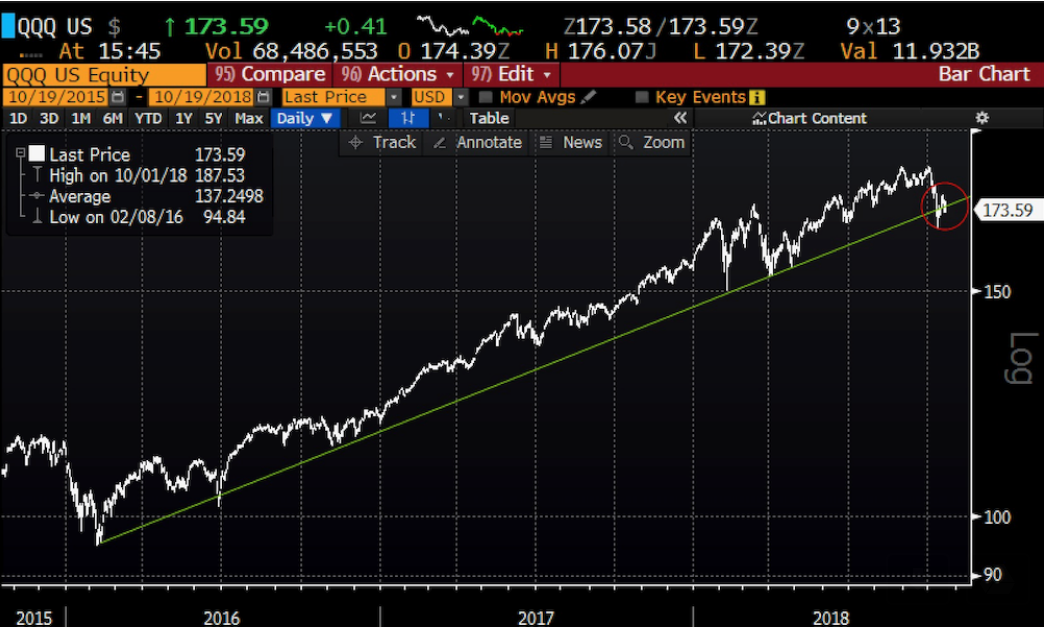 Shares of Netflix (NFLX) gapped up more than 10% this morning, briefly trading above $380 in the pre-market after posting subscriber growth that beat expectations. Shorts who were pressing the stock’s nearly 20% decline from its high, hoping for a second consecutive sub miss frantically covered, while the “buy the dip crowd” felt that any discount to the stock’s prior all-time highs in June, is still a dip, despite the stock’s gap. Well the opening frenzy has abated, and the stock has seen nothing but sellers since, with the stock down $20, or 5% since the opening tick: 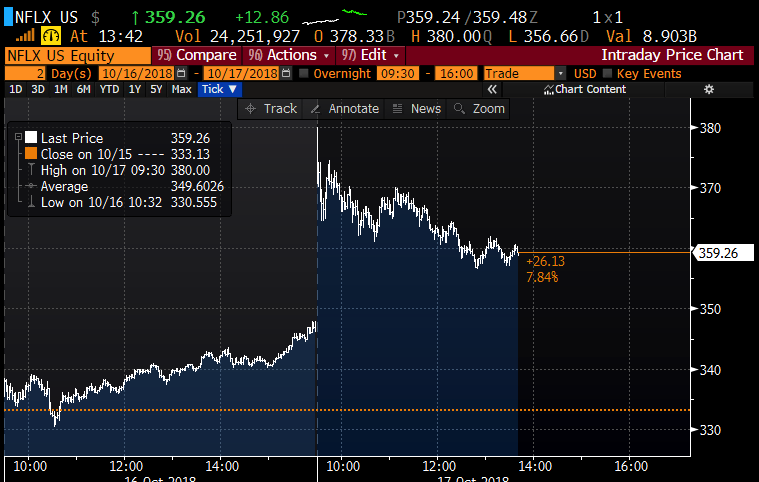 All eyes are on how this stock closes today, if it is not able to stabilize and closes on the lows, and even down on the day, I suspect it will drag the rest of the Nasdaq down with it, and possibly in a quick and dramatic fashion that would likely see follow through into tomorrow’s session: 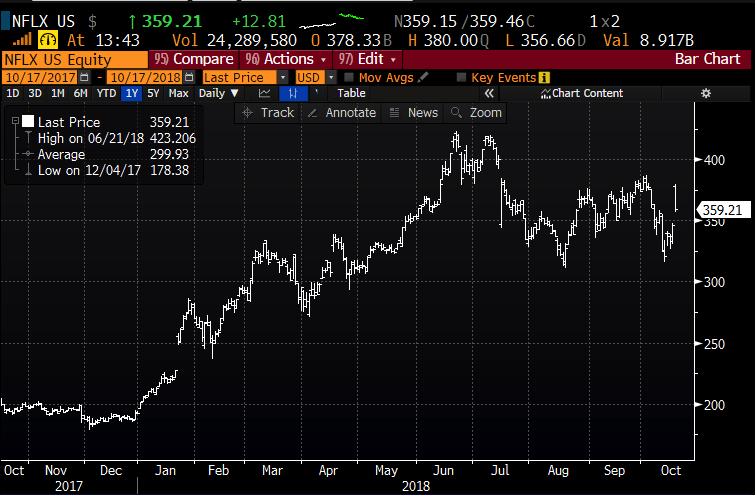 From the early October highs to last Thursday’s intraday low the QQQ had a 10.5% decline and has since bounced about 5.5% from the lows. pausing today at what might be a wee bit of technical resistance, while Thursday’s close just below $170 should serve as near-term technical support: 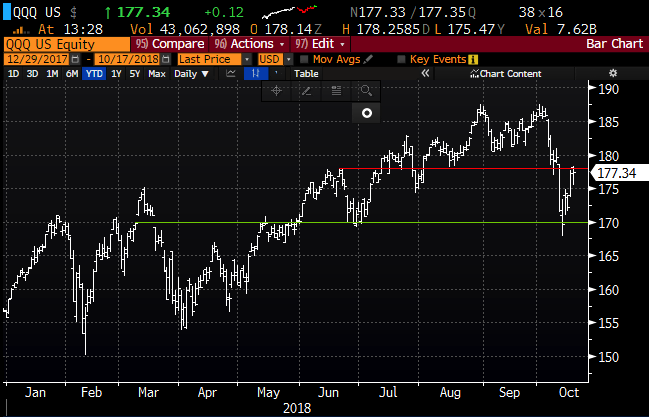 This month’s volatility has obviously caused short-dated options prices to spike, with 30-day at the money implied volatility up from 15% in late Sept, to its current 20% but down from last week’s 6-month high of 25%: 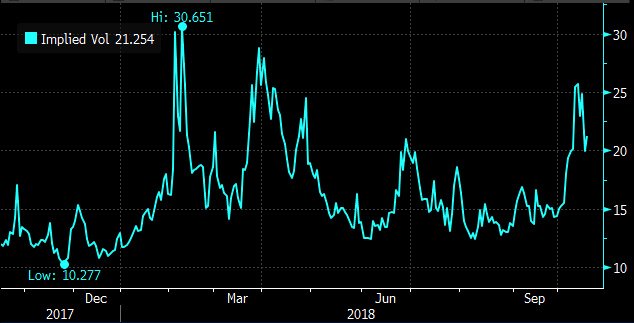 If the Nasdaq were to find it’s footing and slowly work higher, we would see 30 day IV back in teens, making long premium directional trades initiated here challenged. But if you were of the mindset that good news in these stock’s might draw out sellers into any strength, and that bad news will be punished (see Facebook last quarter and since) then long puts or put spreads in the QQQ might prove to be the way to play.

So what’s the trade? If you thought the QQQ will test last week’s low in the coming weeks as either a reaction to MAGA’s earnings or a continuation of a broad market sell-off then consider the following defined risk trade idea:

Rationale: this trade risks a little less than 1.5% of the etf price to make a near the money bearish bet into the earnings of five stocks in the coming two weeks that make up nearly 50% of the weight of the etf. The options market is saying there is about a 38% probability that the stock will be at the break-even on Nov expiration and about a 20% chance the stock will be at the low short strike. This trade idea offers and attractive risk-reward for those looking to either make an outright bearish bet on mega-cap tech over the next month or for those merely looking to tack on some protection for a portfolio of tech stocks.