This morning, American Airlines (AAL) offered an update to its 3qtr guidance that on the surface looked better than expected, per Bloomberg:

American Airlines Group Inc. revised a key measure of pricing power to the high end of its previous forecast last quarter even as disruptions from Hurricane Florence reduced pretax profit by $50 million.

Revenue from each seat flown a mile rose about 2 percent to 3 percent from a year earlier, mainly because of higher fares on domestic tickets sold just before travel

The stock’s reaction to the news is downright horrid, making a new 52-week and multi-year low, down 42% from its 52-week highs: 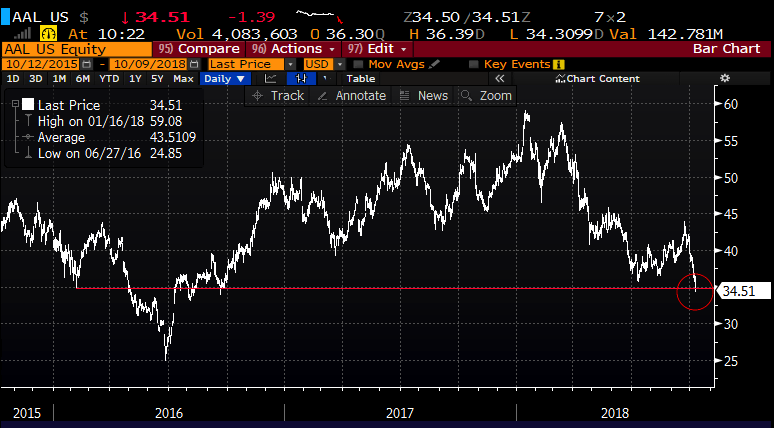 There have been massive divergences in the performance of major U.S. airline stocks so far in 2018. United Airlines, the third largest by market cap at $22 billion is up 22% on the year, having just made a new 52-week and all-time high last month, before retreating nearly 10%: 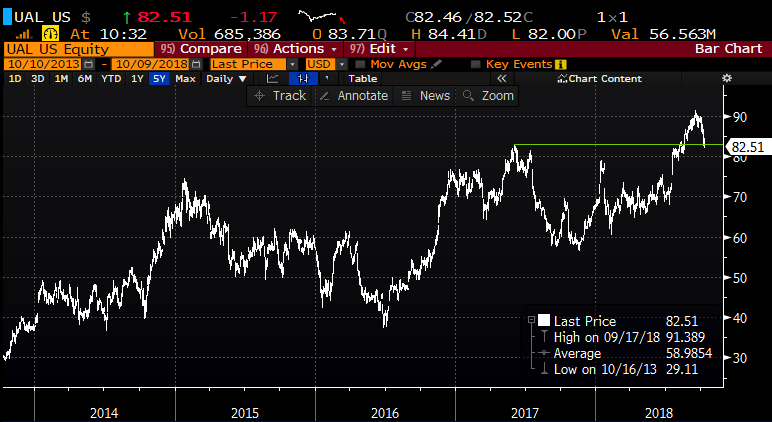 UAL will report Q3 results on Oct 16th after the market close.

On Thursday before the open largest U.S. airline by market capitalization, Delta Airlines (DAL) will report Q3 results. The options market is implying about a 3.8% move in either direction by Friday’s close. The Oct 12th weekly 51.50 straddle (the call premium + the put premium) is offered at about $2, if you bought that and thus the implied movement for earnings you would need a rally above $53.50 or below $49.50 by Friday’s close to make money. The stock has not been a huge mover on earnings after the last year, rallying about 2.5% on average the day following the last four reports.

Shares of DAL have been rangebound for the last year, despite it being a fairly wide range between $48 on the downside and $60 to the upside, with the stock’s declines over the last couple weeks placing it down 7% on the year, and 13% from its Sept highs: 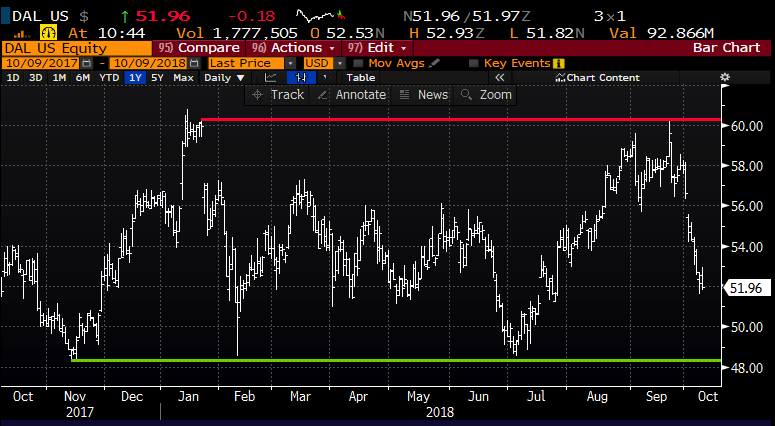 For the better part of the last two years, after a very volatile 2016, DAL has been gradually working higher in a channel from the mid $40s to the mid to high $50s, without much progress vs the broad market: 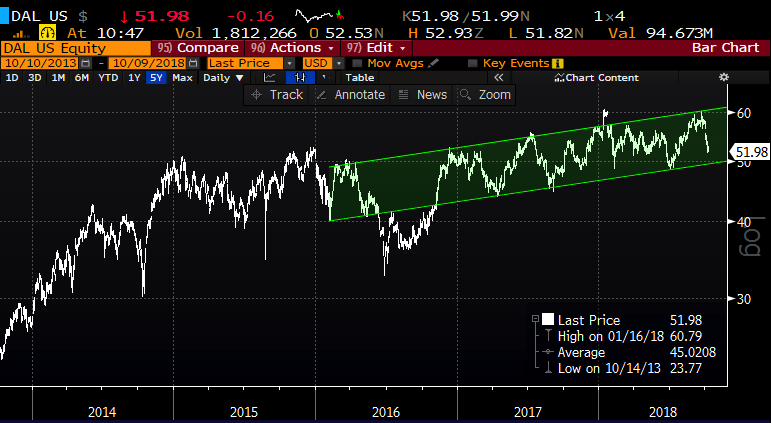 So what’s the trade into DAL’s earnings Thursday morning? When stock’s sell-off into an earnings event like the way DAL has over the last couple weeks it can be a very challenging setup to remain with the prevailing trend, as it won’t take much to get a little short squeeze if the news is not as bad as expected.

I would also say that given the implied move is only $2, for those looking to pick a direction and define one’s risk, playing for a break-down towards support near $48, or a bounce back towards the $56 breakdown level, then weekly at the money options offer a dollar cheap way to just risk $1. But our usual disclaimer rules here… you need to get a lot of things right to merely break-even on long premium directional trades into events, first and foremost direction, the magnitude of the move and timing.

But taking a look a the near-term support and resistance levels, an intermediate target of about 10% in either direction is what I would target depending upon my directional inclination, with what looks to be very healthy support at the July low of $48, and a decent upside target at the $56 breakdown level last week at $56: 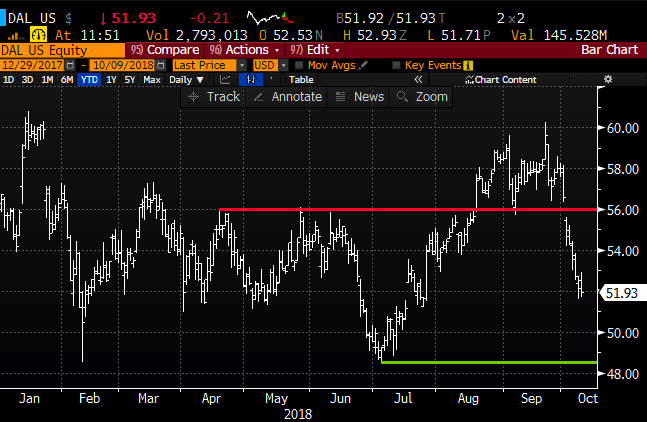 Keeping the above disclaimer in mind, the most important thing you can buy yourself is time if you are convicted on a post-earnings directional move to either technical level detailed above. I would likely look at to Nov expiration…

Rationale: the trade-off to spending $1 for an at the money call in the weeklies is that it is a very binary trade. Get the direction wrong and the trade is a total loss in 2 trading days. This trade offers more than a month to meet the higher break-even while risking a tad more than the weekly at the money call. The options market is saying there is about a 44% probability that the Nov 52.50 call will be in the money on nov expiration and only a 12% chance the 57.50 strike will be in play.

Or If I thought the company would miss and guide down I might just use a put spread in the Oct 12 weeklies, knowing that I am risking what I am willing to lose as this is not exactly a high probability bet… but weekly at the money put spreads look dollar cheap…

Rationale: this trade has a break-even down 2%, but offers a potential 4 to 1 payout if the stock is back down towards the well defined technical support by Friday’s close. The options market is saying there is about a 30% probability that the stock will be down near the break-even at 50.40 on Friday’s close and only a 10% chance that it will be at 48. Again, this is a bit of a punt and only for the convicted.