Earlier in the week, subscription shopping service Stitch Fix (SFIX) announced results that disappointed on active subscribers, revenues and margins, and the stock got murdered to the tune of 35%. Despite this week’s bloodbath, the stock is still up 80% from its 2017 IPO, still up 7% on the year and sporting a $2.7 billion market capitalization. 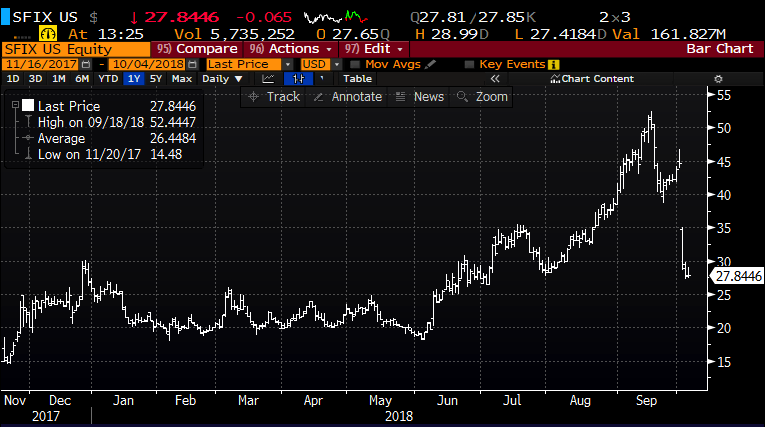 While mega-cap tech stocks have massively outperformed the broad market over the last year or two, investors have been fairly unforgiving to recent IPOs that have failed to live up to the pre-deal promise. Take Snap Inc (SNAP) which as I write is making new all-time lows, down 47% on the year, and down 75% from its post IPO highs made in March 2017: 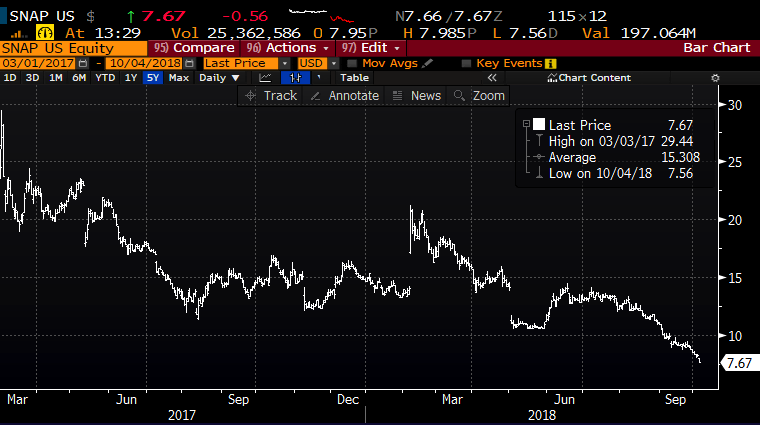 As we head into earnings season and a day that mega-cap tech stocks, the best performing in the market (responsible for most of the S&P 500’s (SPX) and the Nasdaq Composite’s (CCMP) 7 & 14% year to date gains respectively, are getting hit hard (FB -2.7%. AMZN -2.5%, AAPL -1.8%, GOOGL -3.5% & MSFT -3%) it makes sense to keep an eye on some more recent tech issues that could disappoint and suffer a similar fate as SFIX.

One such name that comes to mind is Spotify (SPOT) who went public through a direct listing in early April at $132 and sports a $30 billion market cap, despite the expectation that they will lose $565 million (GAAP) in 2018 on $5.2 billion in sales. Since its public listing SPOT has two quarterly results under its belt, the first time in early May dropping nearly 6% and the last time in late July rising 4.5% the day after, which also marked its all-time high, just below $200. Since then the stock has made a series of lower highs and lower lows. The technical set up near term looks challenged, having broken the uptrend last month that had been in place since April, and today’s test of a new 2 month low: 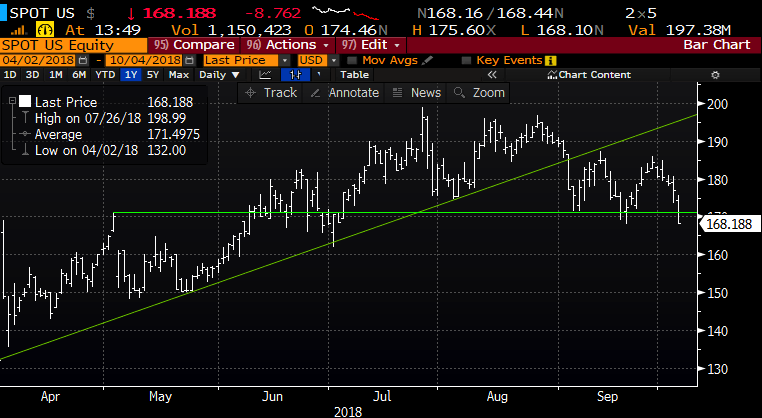 SPOT does not report for a few weeks (NOV 1, before the open) so it might make sense to check in on how options are priced between now and the Nov 2nd weekly expiration, which catches earnings…

With the stock at $168 as I write, the Nov 2nd weekly straddle (the call premium + the put premium) can be purchased for about $18, if you bought that, and thus the implied movement between now and the close on Nov 2nd you would need a rally above $185.50, or a decline below $149.50 to make money, or about 10.5% in either direction. Given the stock’s ytd gains, the 5% or so movement over the last two-quarters post-earnings, I expect the implied move likely to be close to 10%, so options prices this far out seem fair to be honest. Its worth getting a sense for how investors are pricing risk in volatile and expensive stocks like SPOT into events, especially if you are considering trading the name around earnings. We will be sure to check back in closer to the event.