Costco (COST), the big box retailer will be one of the first major retailers to report Sept quarter earnings tomorrow after the close. The options market is implying about a $6 move or about 2.5% in either direction by Friday’s close, which is above its ten-year average one-day post-earnings move of about 2%, and well above the 75 basis point decline over the last two quarters. The main takeaway though is that COST is generally not a huge move immediately after earnings.

All that said, I think there are few periods over the last ten-years where shares of COST were up 26% on the year heading into Q4, as they are now, very near all-time highs, and up 55% year over year with its current and forward P/E over 30 while its out year eps growth is expected at just 10% on 7% expected sales growth. The stock reflects strong results and forward guidance. 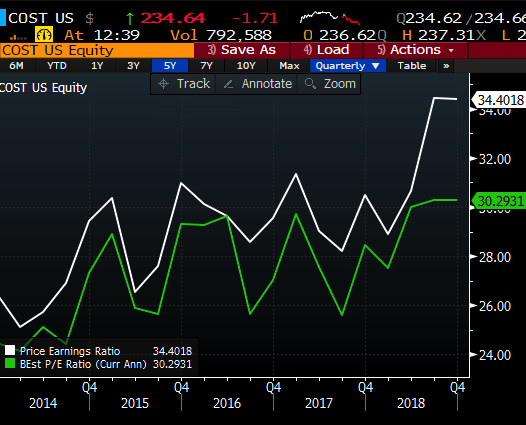 A good chunk of the stock’s year to date gains came after a long consolidation in the first half of the year, and since its breakout in June above $200 that resulted in a very slow and steady march higher with what seemed like an unending series of new highs. Technical support near term appears to be around $220, just above its 100-day moving average (green line below), while near-term resistance will be the recent all-time high at $245: 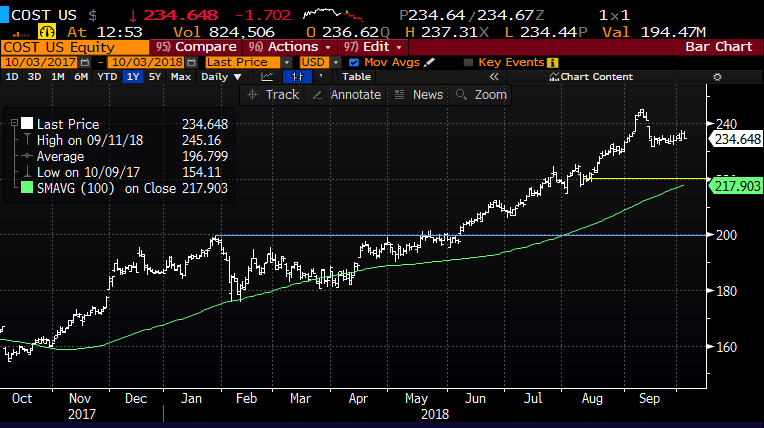 That slow and steady move higher over the last few months resulted in short-dated options prices trading very near its cheapest levels of the last year into the end of August, just before a couple of analyst downgrades in mid-Sept that caused the stock to drop and investors rethink the risk-reward as valuation started to look very expensive to expected growth.

So what’s the trade? I am truly hardpressed to see how the company will be able to print an beat and raise that will justify investors and the two analysts who downgraded the stock on valuation last month to rethink the ability for the stock to trade materially higher between now and year-end.

All that said, with options prices as cheap as they are into the print, the at the money put or call in the weekly options expiring Friday afternoon at a little more than 1% of the stock price look attractive for those with a convicted directional view. For instance with the stock at $234.70, if you thought the stock could rally in-line with the implied move on Friday following a beat and raise, then the Oct 5th weekly 235 calls offered at $2.95 look like an ok risk-reward, risk 1 to possibly make 2 in the event the stock rallies the $6ish implied move. But as always I’ll offer our normal disclaimer, you need to get lot of things right when trading options from the long side into events, first and foremost direction, and of course timing and then the magnitude of the move.

On the flip side, and considering the above disclaimer, if you thought the company would post uninspiring results and guidance, and given positive investor sentiment, despite high valuation, it might make sense to look further out then just a one day trade and play for a more sustained move back towards technical support down near $220. For instance looking to Nov expiration with the stock at $234.70, I might consider buying a put fly….

Rationale: this trade idea targets a move to near-term technical support, breaks-even very near the the implied move to the downside, offers more than month to play out and risks less than 1% of the stock price.