Lennar Corp (LEN) one of the largest U.S. homebuilder by market cap ($15 billion) and expected sales (~$21 billion) will report Q3 earnings tomorrow before the open. The options market is implying about a 5.5% move in either direction, which is essentially in line with the average move over the last four quarters, all of which have been higher.

Despite the initial positive reaction to earnings over the last year, the stock is down 25% on the year, trading very near its 52 week lows, and down 35% from its 52 week highs made in late December. The weakness over the last week or two caused a breakdown below a key 18-month support level just below $50: 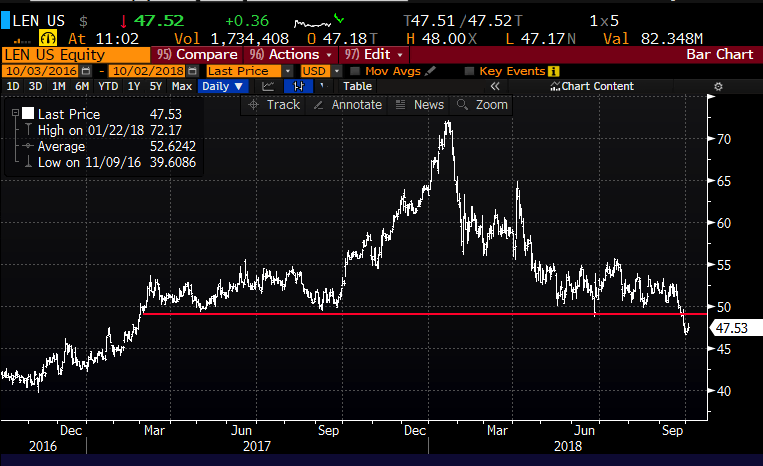 Oh and what’s up with-the massive divergence between investor sentiment and Wall Street analyst sentiment? 17 analysts rate shares of LEN a BUY with only 3 holds and no Sells with an average 12-month price target of 14 analysts of the coverage group who publish them up at $71.

I guess it is important to note that despite consumer confidence having just printed at an 18 year high, a look under the hood suggest that consumers are pushing out large purchases like cars and homes, which might be one of the reasons that U.S. bank stocks also lag the broad market as the yield curve is at its flattest since 2007, suggesting that banks might be a tad tighter as relates to lending to consumers. Specifically, as it relates to homes, the rise in the 10-year Treasury yield above 3% has caused 30-year mortgage rates to rise to 7-year highs, coupled with supply shortages and input cost increases making homes fairly unaffordable and a generally tricky selling environment.

So we have auto stocks at 52-week lows, we have homebuilder stocks at 52-week lows, and we have bank stocks (measured by the XLF) flat on the year (vs 9% gains for the SPX) and down 9% from its 52-week highs made in late January. Shouldn’t these three groups, that all trade at massive discounts to the broad market multiple be benefiting from our rip-roaring economy??

So what’s the trade? All that said, stocks like LEN with poor investor sentiment could see a nice pop on any good earnings news. Investors are clearly bracing for bad news, and Wall Street analysts remain optimistic. With the implied move for earnings a little more than 5% and no weekly strikes listed, the risk-reward for long premium directional trades is not great… for instance.

With LEN at $47.45, the Oct 47.50 call is offered at $1.70, or 3.5% of the stock price, which would break-even up at $49.20 not far below what would likely be a near-term technical target at $50, which is meh at best. You could spread the at the money calls but the Oct 50s can be sold at 70 cents making a $2.50 wide at the money call spread for $1… so risk $1 to maybe make $1.50 of the stock is $50 or higher in a little more than two weeks. The Oct 52.50 calls ate 30 cents bid, so the Oct 47.50 – 52.50 call spread would be $1.40, or nearly 30% the width of the spread, again, not great. Options prices are basically teasing traders to enter short positions to make direction bets, which can be risky into events like earnings. One trade that could make sense if one was willing at worst case scenario to be put the stock down at $45 on a miss and guide lower would be to buy the Oct 45 / 50 risk reversal for even money. Selling 1 Oct 45 put at 72 cents and buying 1 Oct 50 call for 72 cents, costing nothing. This trade would make money mark to market as it trades higher towards the long 50 call strike, and profit above on expiration, and lose money mark to market as the stock trades lower towards the short 45 put strike and lose below on Oct expiration.

AND this is important, LEN looks like a really tough press on the short side. The company would need to meaningfully guide down, coupled with poor quality of earnings in the quarter just reported. For those looking to press the group it could make sense to look at the Homebuilder ETF, the XHB, which is also heavily represented by home improvement stocks, construction supply and obviously builders. The top 15 stocks are each weighted at about 4.5% equalling nearly 70% of the total weight of the etf. 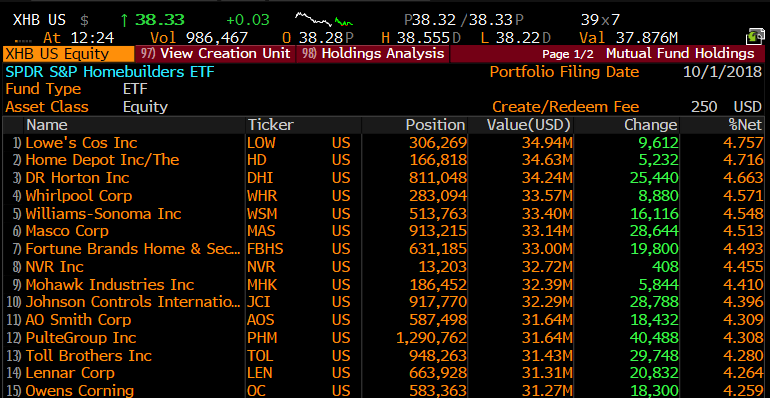 The XHB is down about 13% on the year, and at its 52 week lows, but the thought here is that some of the non-builder names have performed well like The Home Depot (HD) and if results and guidance are uninspiring from a swatch of builders, maybe we start to see some participation to the downside, as the XHB looks to be at a precarious technical spot on the charts: 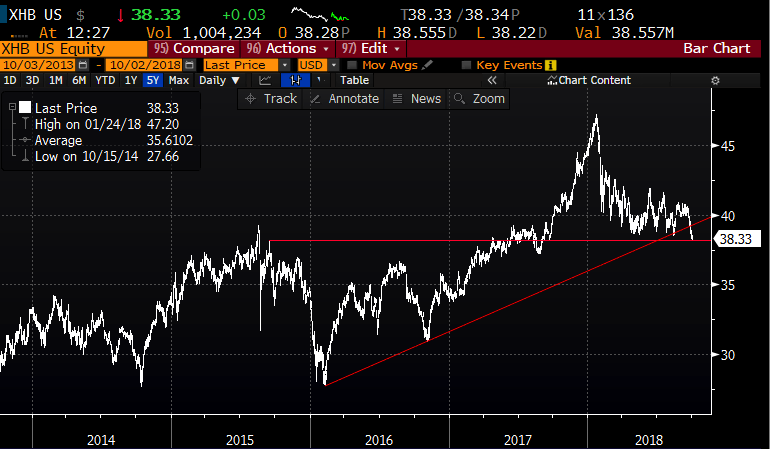 If I were inclined to play for a breakdown here I would look out to December expiration, allowing for enough time to capture Sept quarter earnings from most of the retail components.

Rationale: risking less than 2% of the stock price to possibly make 6%,