In the video I make the point that the XLP is heavily weighted to five stocks, which make up 50% of the etf, per Bloomberg:

The third largest holding, PepsiCo (PEP) is scheduled to report earnings tomorrow morning before the open. The options market is not implying a big move, about 2% in either direction, despite the fact the stock rallied almost 5% the day of their Q2 report in early July,

The other four in the top five will all report Q3 results prior to Nov expiration (PM Oct 18th, PG Oct 19th, KO Oct 30th, and WMT Nov 15th). The reaction to PEP earnings in an investment environment where low growth, high valuation, high paying dividend names are out of favor with the 10-year Treasury yield above 3%, where multinational U.S. manufacturers face headwinds from dollar strength, high input costs and potential adverse effects of a building trade war with China, I would suspect consumer staples could continue to be vulnerable if as a group they post weak results and so-so forward guidance. All five of these stocks trade kind of rich to the market especially when you consider that none are expected to grow eps in 2018 or 2019 above single digits, and all are expected to have sales growth in the low single digits for eternity.

All of these headwinds show in the group’s volatility and underperformance this year, as the XLP is the worst performing sector in the S&P 500 (SPX), down 3.25% on the year, which is just terrible compared to the SPX’s 10% ytd gains, trading very near its all-time high, as the XLP is still down 8% from its all-time highs made in late January.

The chart of the XLP since the start of its uptrend in early 2009 during the Financial Crisis might have had a bit of an inflection point this year, having broken below the uptrend, which was healthy technical support, and on the most recent bounce having just been rejected at the uptrend, that once broken now becomes technical resistance: 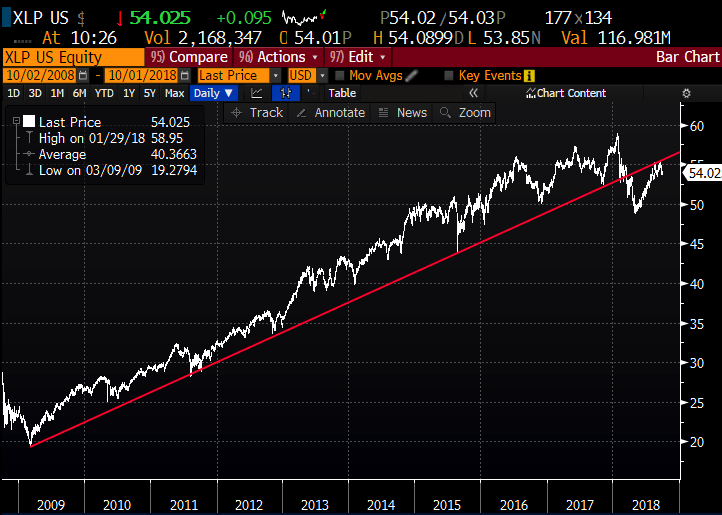 So what’s the trade? Near-term, XLP looks like a good candidate to retrace much of its bounce off of its 52-week lows made in May back towards $50. Options prices in the etf are very cheap, even into earnings season where most of its large components will be reporting prior to Nov expiration. Obviously, there is the potential for the bad reports to be canceled out by the good ones, but given the underperformance of the large components I suspect a few bad ones, by the big ones and we see this group turn lower, no matter what sort of broad market we are in.

Rationale: this is cheap vol heading into earnings season. Given the valuation relative to growth, the dividend yield relative to treasuries, and the growing headwind from tariffs, XLP at the money puts look downright cheap for those looking to press a weak sector in the market, despite what seems like a possible breakout in the broad market to new highs. In the event XLP moves below its break-even it would make sense to sell possibly the Nov 50 or 49 put, making a vertical put spread, to take in some premium and reduce the premium at risk for the balance of the trade.