You know the drill, in 2016 and much of 2017, a popular investment theme in retail was that Amazon.com was killing bricks and mortar retailers with their ability to compete on price and convenience as a result of the growing scale and profitability of their AWS public cloud business. From the then all-time high in 2015, the XRT, the etf that tracks the S&P Retail Sector sold off 26% to its early 2016 lows, and then after a volatile 2016 to close very near its highs at year end, the etf once again had a 20% decline before making a fairly well defined double bottom that has resulted in new all-time highs, which is where we are now, up 36% from its 52-week lows.: 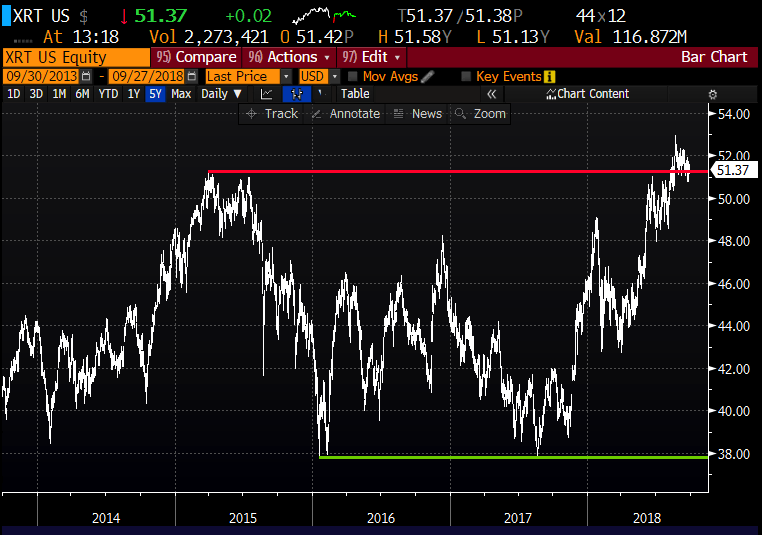 What got me thinking about retails stocks was this narrative about AMZN and a story this morning in The Information, where they suggest:

That perception should be retired, judging by the growing profits of its largest, most mature business. Amazon’s operating income for North America, which includes retail sales and subscriptions from services like Prime, reached nearly $2.84 billion last year—more than seven times the profit it generated in 2014. The company has already surpassed that figure in the first half of this year.

The point here is simple, if big-box retailers, grocers and department store operators were waiting for regulators to step and make the case that AMZN was using non-competitive practices, I wouldn’t hold your breath in this angle having too much bite. And while bricks and mortar retailers have come raging back, in 2018, this is a result of many of them getting some traction with their own omnichannel strategies, strength in the economy and raging consumer confidence. But it is also important to remember that the e-commerce pie is getting larger, and AMZN’s North American retail sales are growing 30% year over year and taking 50% of e-commerce growth.

This week we saw a consumer confidence print that was back at all-time highs… but as my friend Peter Boockvar from Bleakely Advisors suggested, per Carl Q:

While the 18-year high in consumer confidence is “great to see, it means nothing for investors as this is only a coincident indicator … It certainly told us nothing helpful in 2000 and 2001, the last time many of the key components were at current levels.” – @pboockvar pic.twitter.com/SR9RE2vFMc

I suspect if we were to see a drop off in consumer confidence, that AMZN give their value proposition with Prime will have their sales hold up much better than those who are seeing the fruits of their omnichannel investments over the last few years. I would also suggest that it is worth looking a bit under the hood on the confidence front as there has been housing and auto data that suggests that consumers are pushing out larger purchases. And it is also worth noting that U.S. auto stocks and homebuilders are seeing their share prices get destroyed, with stocks like General Motors (GM) / Ford (F) and Lennar (LEN) and Toll Brothers (TOL) are trading at new 52 week lows while the S&P 500 (SPX) is trading at new all-time highs.

So we could be at peak consumer confidence, with weakening auto and housing data, oil prices nearing 52-week highs with the backdrop of a brewing trade war with our allies and adversaries alike which is likely to lower consumer purchasing power. Retail companies (aside from AMZN) may face very difficult comparisons as we head into the all-important Q4 Holiday selling season.

The one year chart of the XRT shows the recent consolidation above the prior highs, but to my eye, while a breakout to the upside on continued strong retail results and economic data could be likely, a pull-back to the uptrend from the 52-week lows looks to be a fairly reasonable near-term downside target: 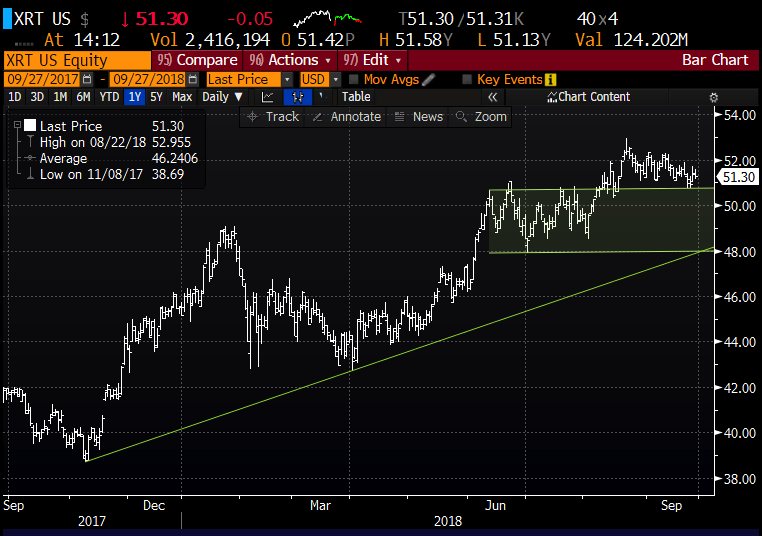 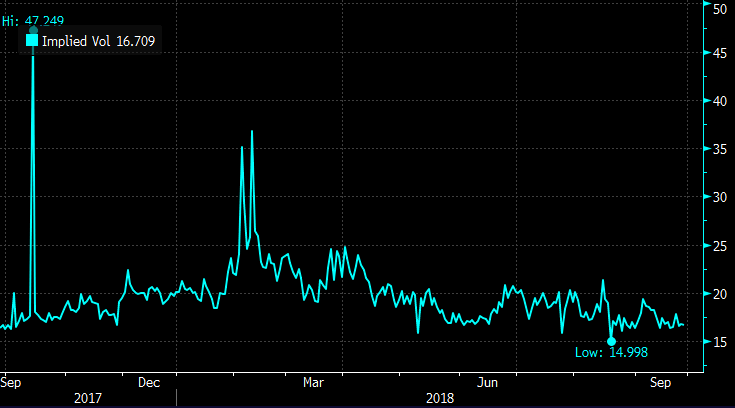 So what’s the trade? If I were inclined to play for a pull-back in the lead up to the holiday selling season I might consider the following defined risk strategy:

Rationale: this trade idea risks less than 2% of the etf price for nearly two months to make a contrarian bet for a near the money downside participation.