Nike (NKE) will report their fiscal Q1 results tomorrow after the close. The options market is implying about a 5% move in either direction which is in line with its 10-year average one-day post-earnings move, but I will add over the last four quarters the stock has had moves of basically flat and up 11%. With the stock at $84.50, the Sept 28th weekly 84.50 straddle (the call premium + the put premium) is offered at about $4.50, if you bought that and thus the implied movement this week for earnings, you would need a rally above $89, or a decline below $80 to make money.

Shares of NKE are up 35% on the year, having just made a new 52-week and all-time high on Friday, and is up 18% since reporting their better than expected fq1 results in late June.

The one year chart below shows fairly healthy near-term technical support just below $80, which was the gap level from late June, which happens to intersect with the uptrend that has been in place for the last year… there is no upside technical resistance: 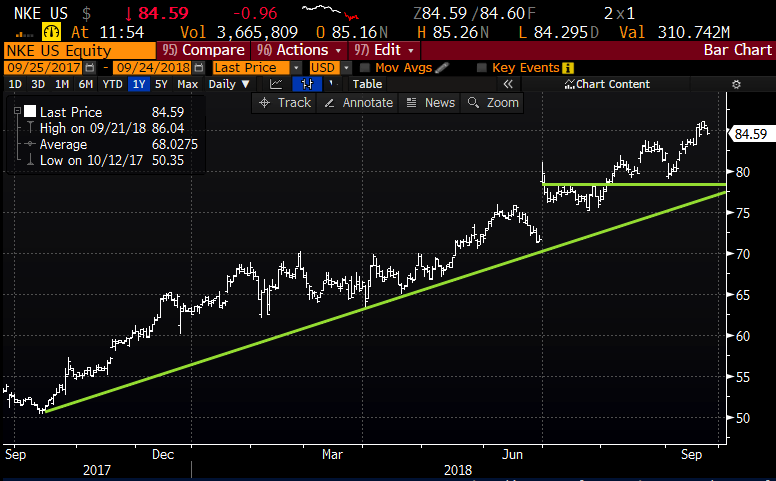 Nike’s controversial marketing of late, featuring the former NFL quarterback Colin Kaepernick in their 30th anniversary of their Just Do It slogan has caught much attention with investors wondering what the potential blowback could be, but it appears that at first blush they are speaking to their growth demographic, and early third party dated suggests the direct to consumer channel, popular with the youths have already shown positive results.

The day following NKE’s Q4 report in late June the stock rallied 11% after showing better margins, improvement in direct to consumers sales, solid growth in China and a return to positive comps in North America. With an expanded buyback, potential tailwinds from the World Cup and a weakening U.S. dollar (60% of their sales are from outside the U.S.) the stock looks poised to make higher highs if the company is able to beat and raise. But I suspect a meet and inline guide is in the stock at current levels, not to mention the fact that the stock is trading at a very rich multiple, ~32x expected fiscal 2019 eps growth of only 12% (35x trailing) on an expected sales growth rate of 8%. 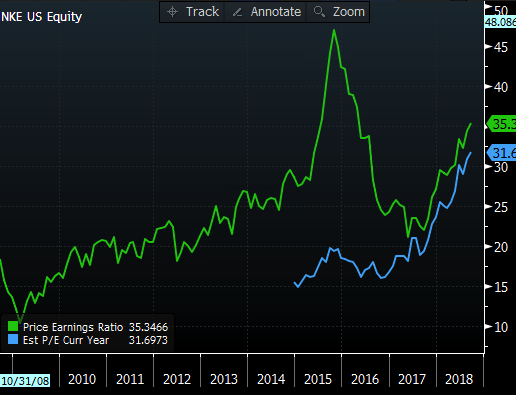 So what’s the trade into the print? Obviously, with the implied move about 5% half of the at the money straddle, the weekly 84.50 call or put would only cost about $2.25, or about 2.5% of the stock price, for those looking to make defined risk directional bets, while spreading at the money calls or puts further reduces the premium at risk.

Profits of the stock up to 89, capped above that.

Losses of stock down to 80, but protected below

Rationale: long holders would do this if they were inclined to hold on to their stock position, but more worried about extreme near-term downside, then extreme near-term upside. If the stock were $89 or above on Oct expiration the long holder could always cover the short call portion of this position for a loss and keep the long position intact. On the downside, the same goes if the stock is below $80, the long holder we need to close the $80 put if it were in the money if wanted to hold onto stock.