FedEx Corp (FDX) will report their fiscal Q1 results tonight after the close. The options market is implying about a 3% move in either direction this week, or about $8, which is rich to the four quarter average one-day post-earnings move if about 2.4%.

On Friday’s Options Action on CNBC my co-panelists Carter Worth, chartist extraordinaire from Cornerstone Macro Research and Mike Khouw took at crack at the stock (watch here). First Carter highlighted how the Dow Transports has just made a new all-time, despite the fact the Dow Jones Industrials Average has yet to do so. 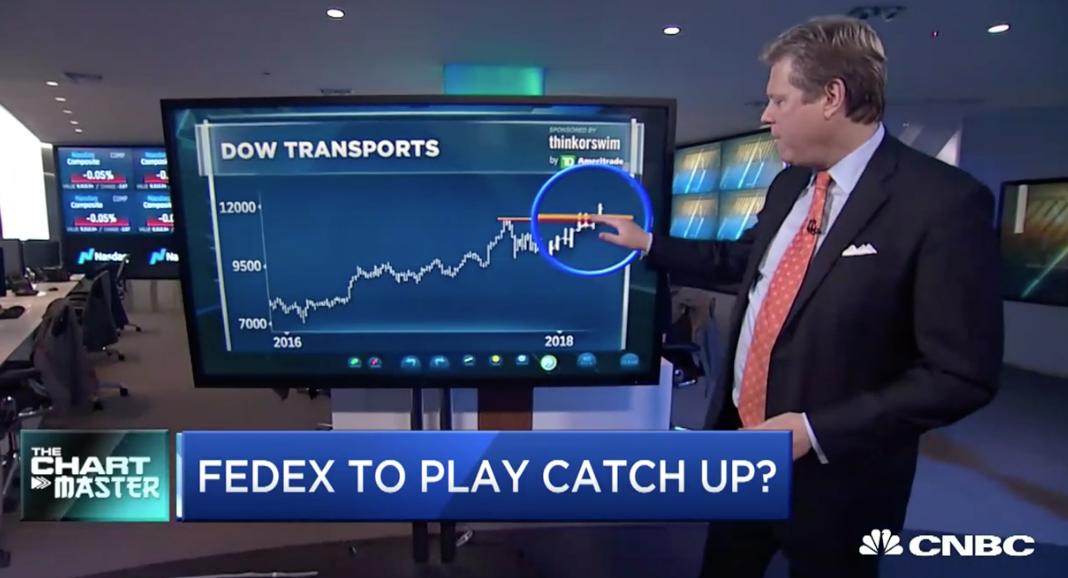 Carter views this as bullish for some of its largest components like FDX that have trailed the group, but to his eye looks poised for a breakout: 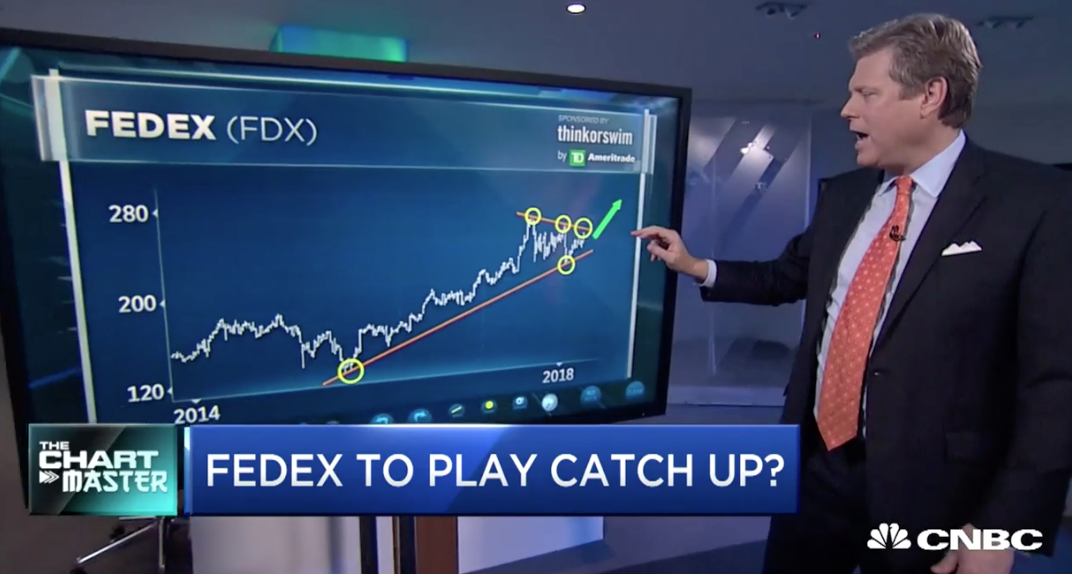 The chart above that Carter is using is a five-year, but zooming in to the one year shows a stock that has been very volatile, trading within a nearly 20% range from its early January peak to its late June low, from which it has rallied 15%, placing the stock up ~3.5% on the year, well below the Dow Jones Transportation Averages (TRAN) and the S&P 500’s (SPX) almost 9% ytd gains. 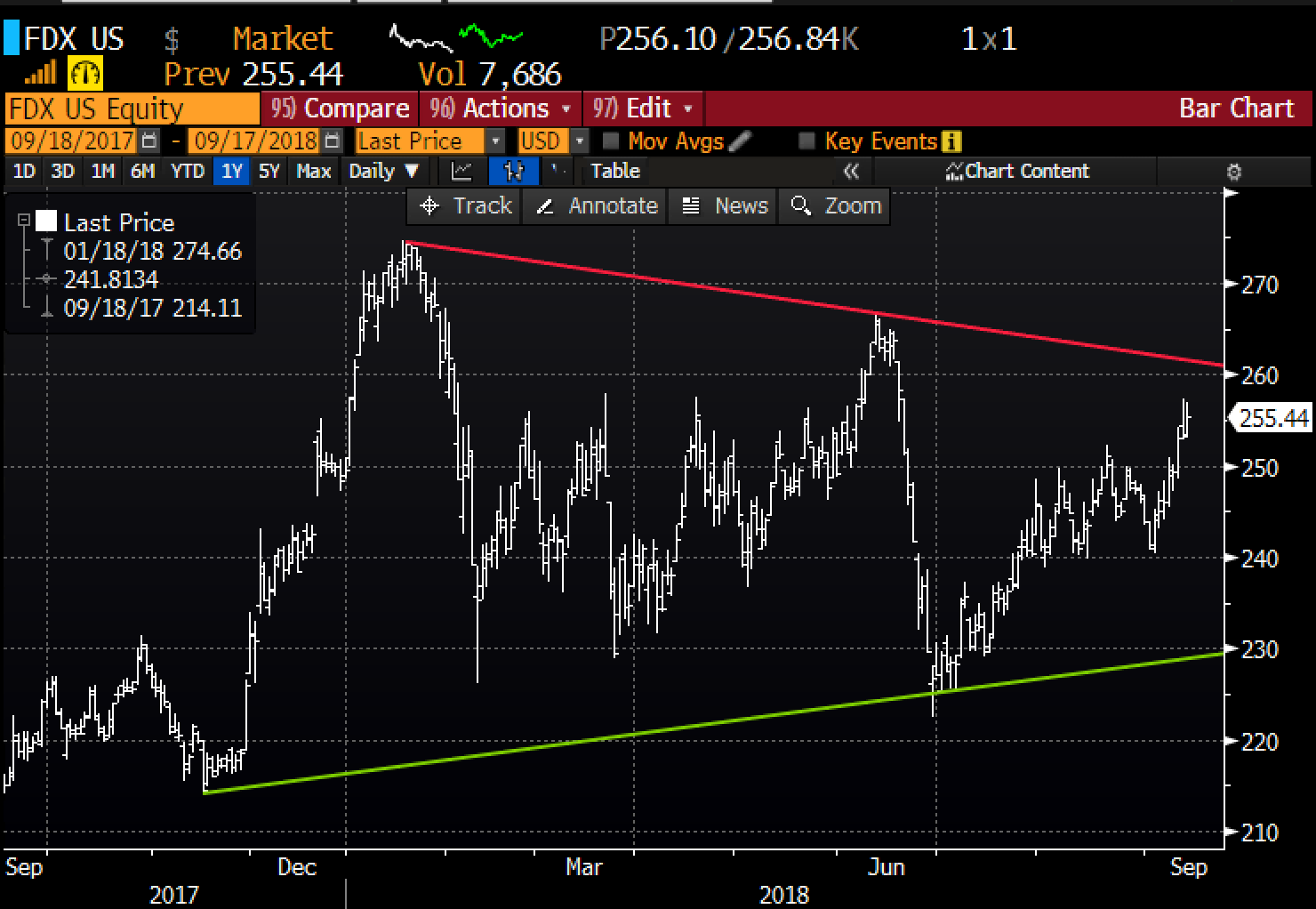 Consistent with Carter’s bullish near-term technical view, Mike highlighted that the stock typically mores about 7% in the month following earnings and that given cheap options premiums, long call spreads, in an effort to define one’s risk into a potentially volatile event. 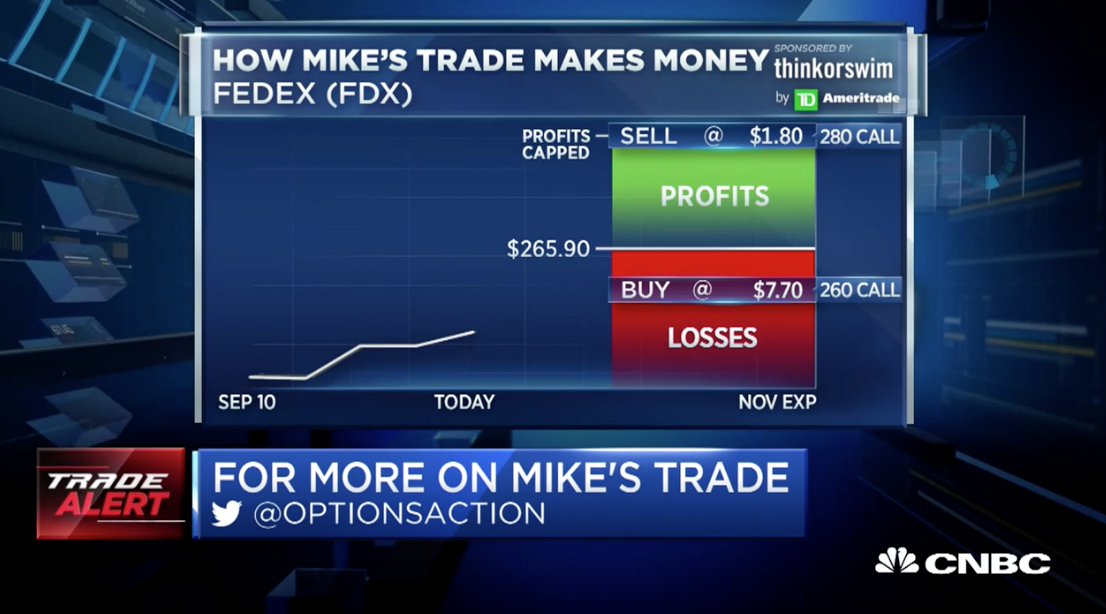 Mike’s trade vs FDX $256 Buy Nov 260 – 280 call spread for about $6, break-even at 266 with max gains of 14 between 266 and 280. This is essentially risk 1 to possibly make two and a half-ish. It’s an ok risk reward. But you might’ve been able to tell from the clip that I wonder why such a cheap stock (FDX) trades well below a market multiple despite its P/E at levels below its expected eps growth rate this year and next. Also the stock’s 15% rally from its late June lows, and it’s 7% rally in just the last two weeks makes me a tad cautious as the stock approaches the downtrend that has been in place since January.

If I were long stock and looking to hold on, I might consider slapping on near-term protection after such a sharp rally of late, or looking to play for a pullback towards $240 over the next month, in line with what Mike’s suggests the stock has moved in the month after earnings of late, I might consider the following defined risk trade idea:

Rationale: this trade idea risks 1.2% of the stock price with a break-even down 2% from the current level over the next 26 days into earnings with potential profits of 4.6%.