This morning, the Washington Post ran a story titled Turkey’s woes could be just the start as record global debt bills come due… getting the ball rolling with:

Ten years after the worst financial panic since the 1930s, growing debt burdens in key developing economies are fueling fears of a new crisis that could spread far beyond the disruption sweeping Turkey.

The article discusses why this time it could be different, not over-indebted consumers but sovereign nations who have amassed dollar-denominated debt that will become increasingly difficult to repay as the U.S. economy outperforms the globe. Rising U.S. interest rates and the dollar could be the spark that lights the fuse. One big difference to the European Sovereign debt crisis that came a couple years after our own financial crisis was that almost every central bank in the developed world was actually engaged in very accommodative monetary policy that kept interest rates near or below zero.

This morning my friend Peter Boockvar, the CIO of the Bleakley Advisory Group and the author of the Boock Report highlighted just how the problems in Turkey and Argentina may be spreading, despite experts suggesting “that there is nothing to see here” and that this mini-crisis is “contained”: 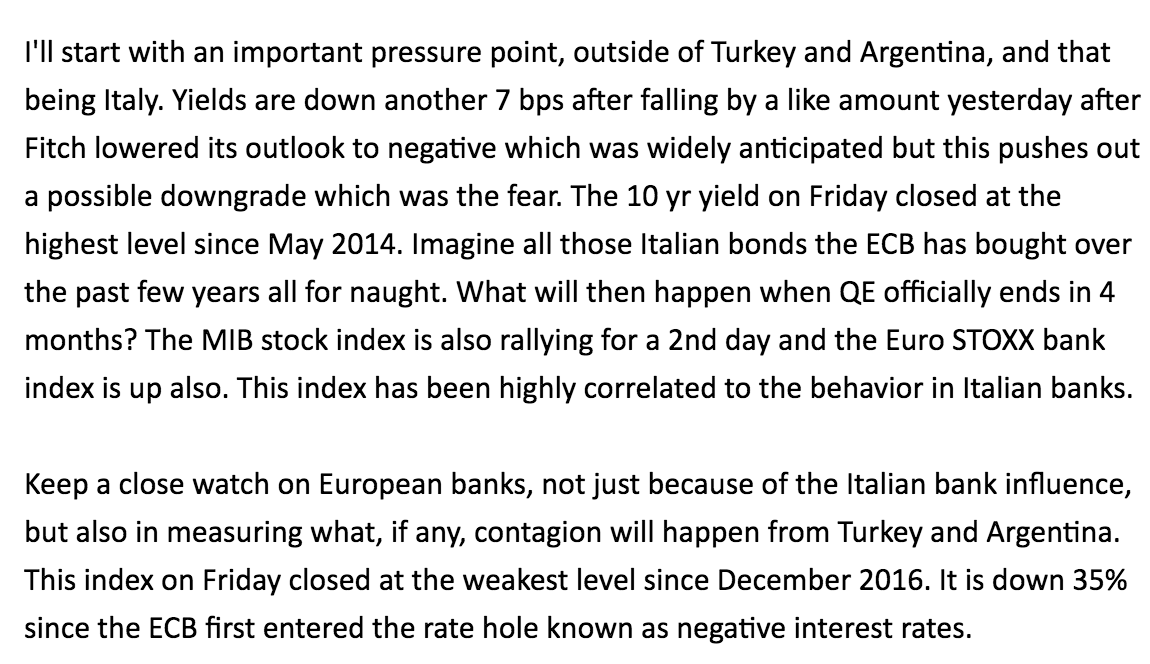 And the Euro Bank Stoxx Index (SX7E) may very well be one of the worst looking equity related charts on the planet, despite the fact we might not see alarm bells flashing until the mid-80s, some 20% lower than current levels: 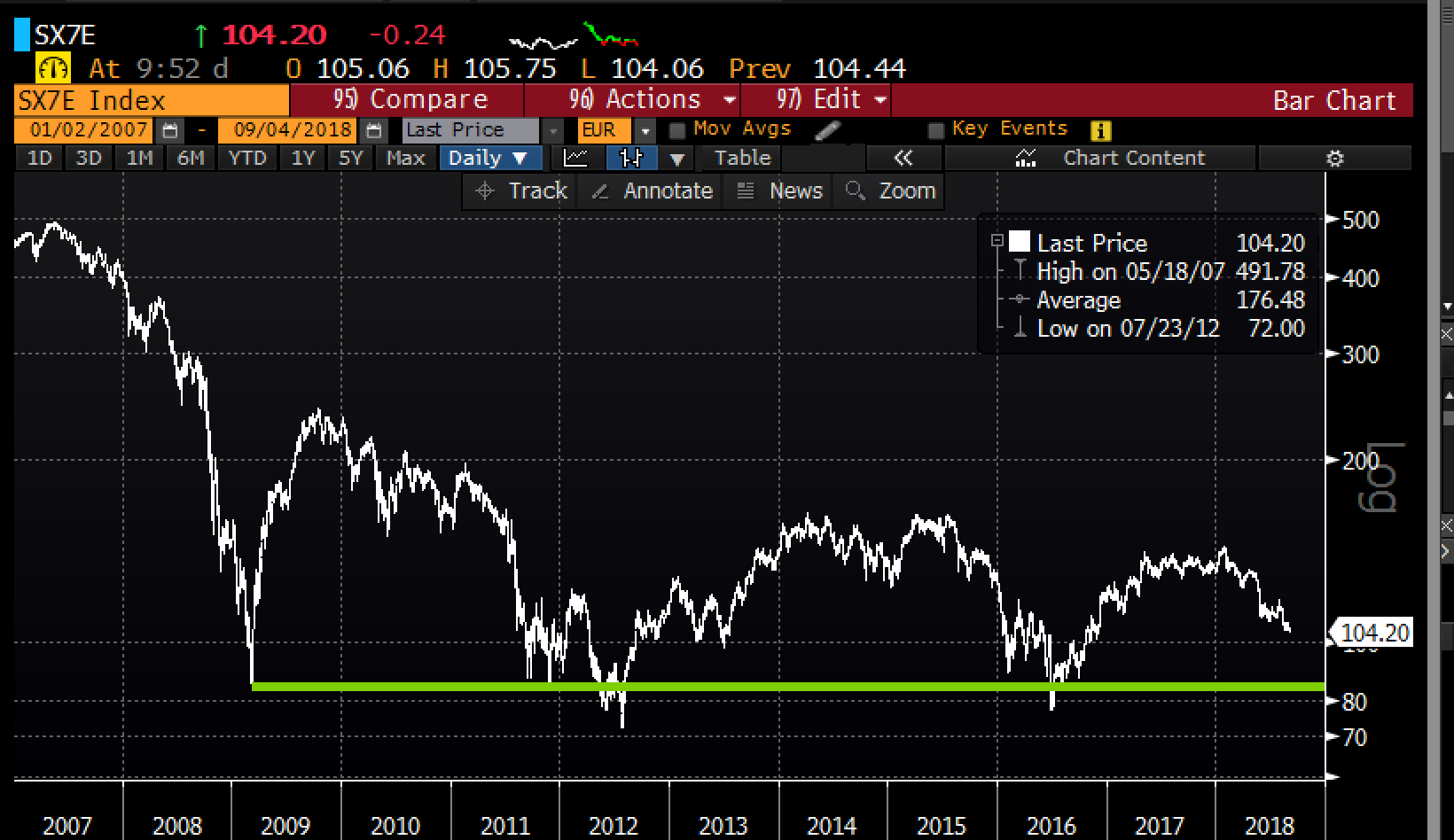 Aside from banks with exposure to weakening emerging market (EM) debt that could be the eye of the storm of the next financial crisis, how would one play for the next leg lower?

There are a handful of EM debt etfs, but the iShares JPMorgan USD Emerging Markets Bond ETF (EMB) which tracks the JPMorgan EMBI Global Core Index appears to be the most liquid, which seeks investment results that correspond to the price and yield of the JP Morgan Emerging Markets Bond Index. A look at its top ten holdings shows its diversity and truly emerging market status, per Bloomberg:

While the etf is very liquid, on average trading a little more than 2.5 million shares a day over the summer, options are less so with total open interest about 372,000, averaging about 6,000 over the last month:

But until the recent dust-up in Turkey and Argentina, and the U.S. dollar’s ytd gains, coupled with greater expectations for tighter U.S. monetary policy… options prices have been very cheap given the low levels of realized volatility in the EMB. They  just started to pick up a bit, but relative to levels where they have spiked over the last five year during similar EM debt worries, they may prove to be cheap with 30 day at the money implied volatility just below 8%:

Looking out beyond a month, with the EMB at $105.33, the Dec 105 straddle (the call premium + the put premium) is offered at about $4, or a little less than 4%. With the etf down 9% on the year, in a nearly straight line, now sitting on important long-term support. I suspect 4% should be a very easy move to earn out in either direction between now and Dec expiration given the news flow of late: 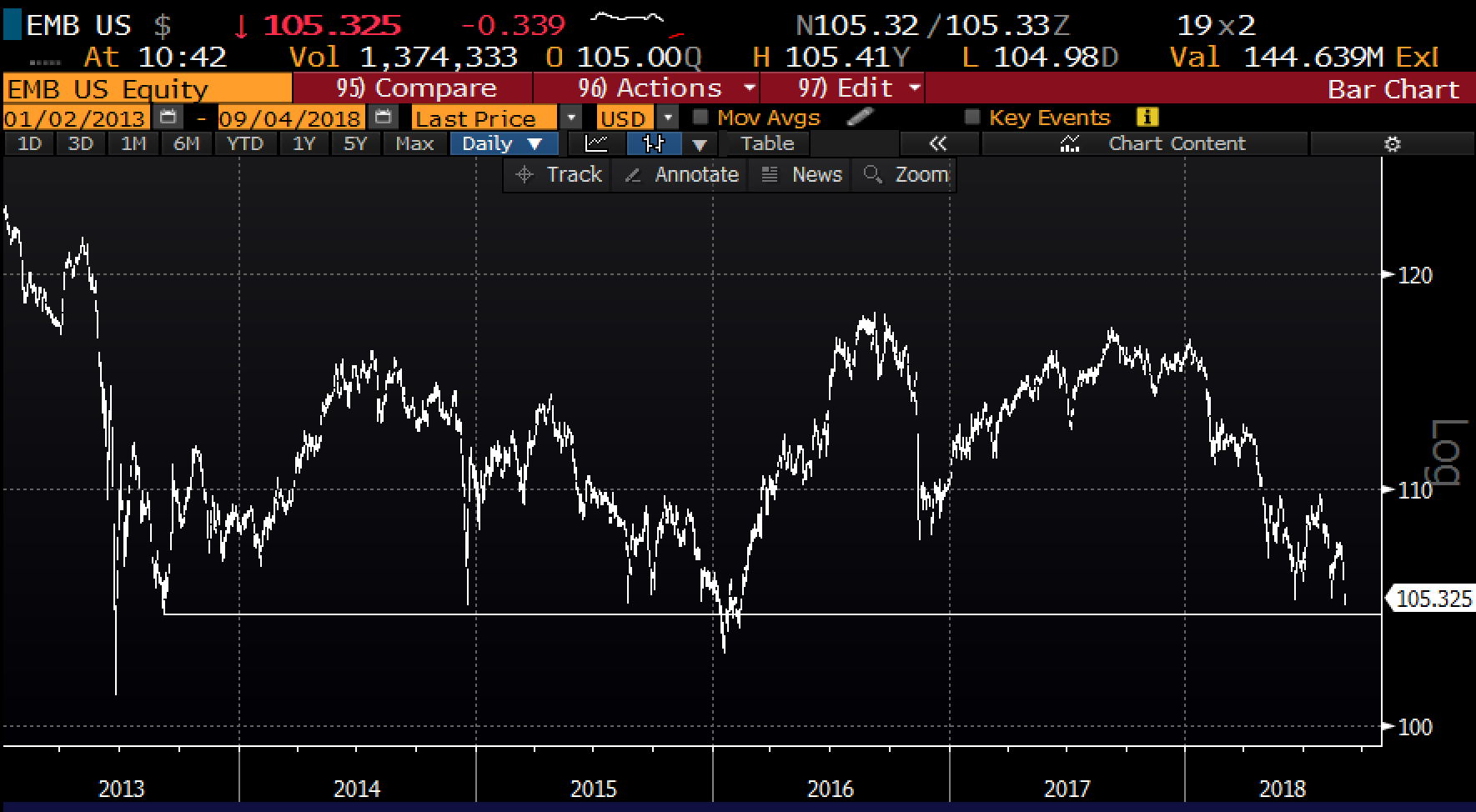 Looking at it another way, the at the money 105 put in the EMB in Dec, offered at about $2, might the cheapest vol on the board relative to EM debt if one thought that things were about to get real this Fall. 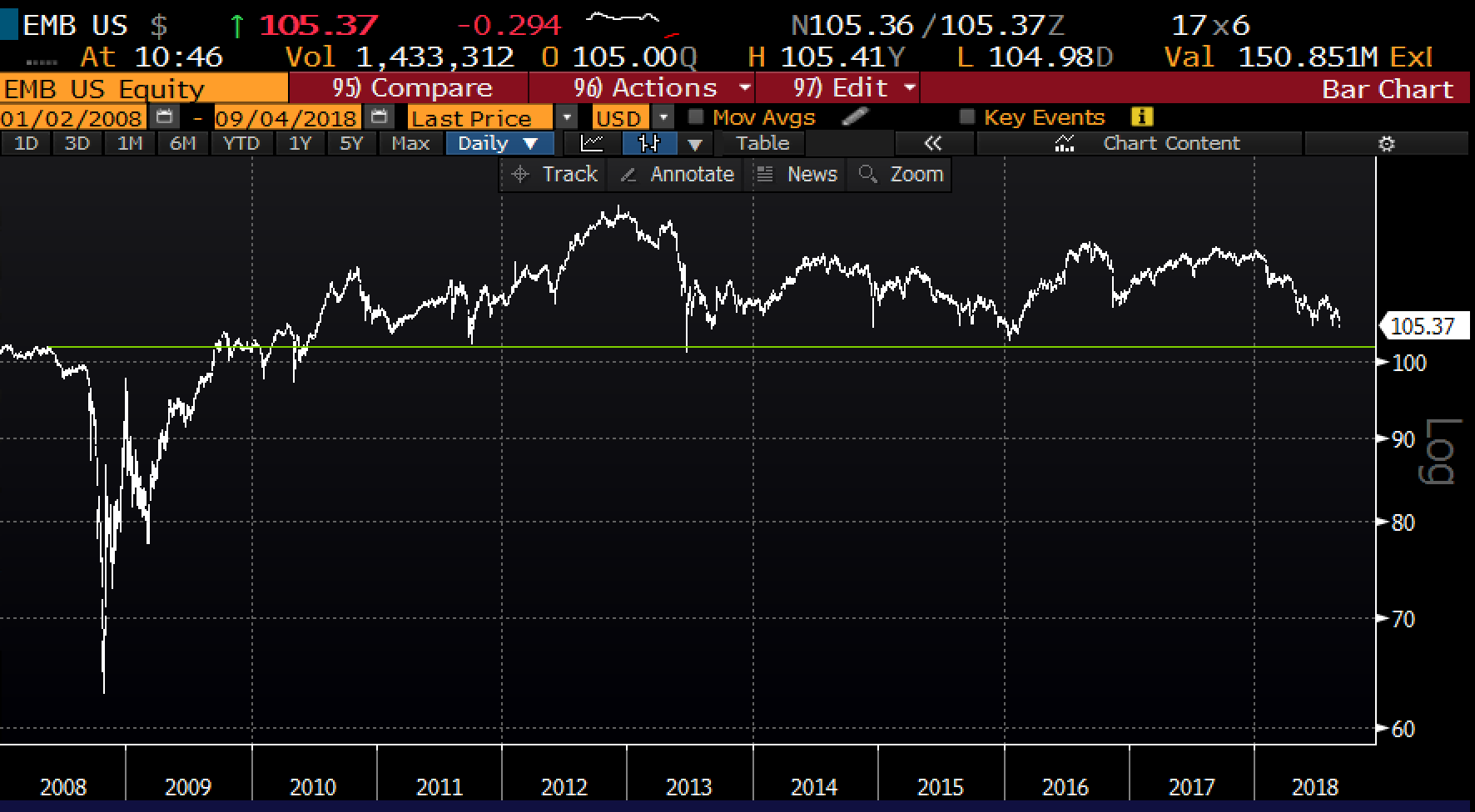 While the EMB might look like a tough press below long-term support near $100, in an EM debt  contagion, we would see volumes in this vehicle spike, and with that we’d see volatility spike to at least the high teens.

Not doing anything at the moment in this name, just wanted to put it on the radar.