Lululemon (LULU) reports their fiscal Q2 results tonight after the close, the options market is implying about a 9% one day move tomorrow that is basically in line with its average one-day post-earnings move over the last four quarters. Interesting the stock has rallied about ten percent on average following each of its last five earnings reports, which might help tell the story of the stock’s 74% gains year to date and its 141% gains over the past year.

The stock’s breakout above $80 in March, from a six-year consolidation, is nothing short of epic! 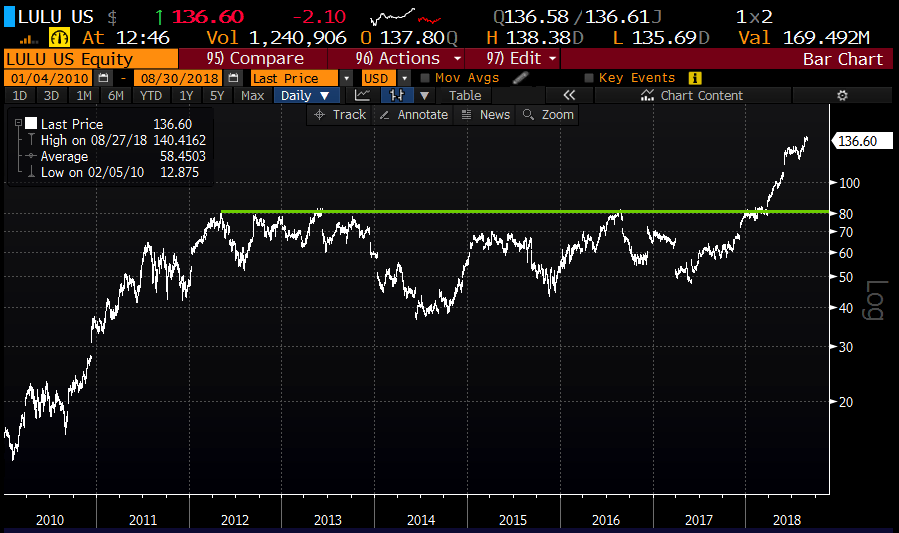 Investors have responded to the company’s return to an acceleration of double-digit sales and eps growth (expected for discal 2019) of 17% and 25% respectively. The stock’s rise though has caused its valuation to start to look just a tad rich as the stock’s return far outstrip growth, as LULU’s P/E and Price to Sales ratios are approaching new five-year highs: 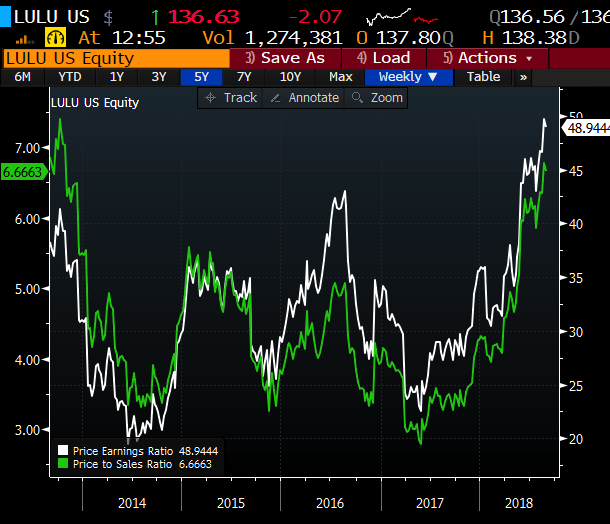 Wall Street analysts remain fairly mixed on the stock with 20 Buy ratings, 14 Holds and 2 Sells with an average 12-month price target of $128.50, below where the stock is trading.

Near-term the stock has fairly obvious technical support around $120, very near in line with the implied move for earnings, and no overhead resistance as the stock is very near and all-time high: 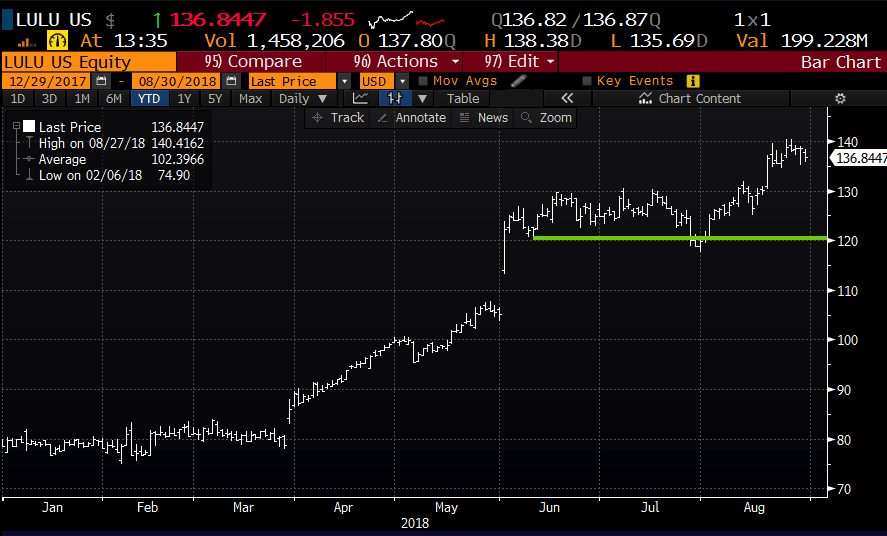 Despite LULU’s 1 year gains, it appears that some investors think that the company could be a decent tuck-in acquisition for a larger retailer or an aggregator of brands, but assuming you would get a 30% premium from current levels, I am hard-pressed to see who would or could pay 8 or 9x their $3.1 billion in expected sales this year.

So what’s the trade?  The stock is obviously priced for perfection, a miss and guide down and the stock is easily down in line with the implied move. While it would take a considerable beat and raise in my opinion for the stock to rise the 9% implied movement.

Dick’s (DKS) commentary about inventory build of LULU competitor Under Armour the other day may be a tough read into LULU, but I suspect any disappointment might be viewed as a trend in athleisure and I would be surprised if LULU were to recover very quickly.

I am not going to bother detailing a bullish trade, as long premium strategies don’t look particularly attractive given the stock’s YTD gains, over the top sentiment and elevated options prices. Also, the idea of selling puts naked to finance the purchase of calls don’t really float my boat as the potential for a greater than expected implied move to the downside seems greater to me than the reverse.

Rationale: this trade idea risks 4.4% of the stock price over the next two months with a max potential gain of 14% targeting a move back to last quarter’s breakout.