Dicks Sporting (DKS) will report their fiscal Q2 earnings tomorrow before the open, the options market is implying about a 9% move in either direction, which is just shy of the average one-day post-earnings move of about 13% over the last four quarters, which includes last quarters 26% one day post rally and last November’s 23% one day drop.

Shares of DKS are up 26% on the year, and up 52% from its 52-week and eight-year lows made in November. The one year chart looks fairly constructive, consolidating most of the year, sharp breakout to new 52-week highs in late May followed by a re-test of the prior highs: 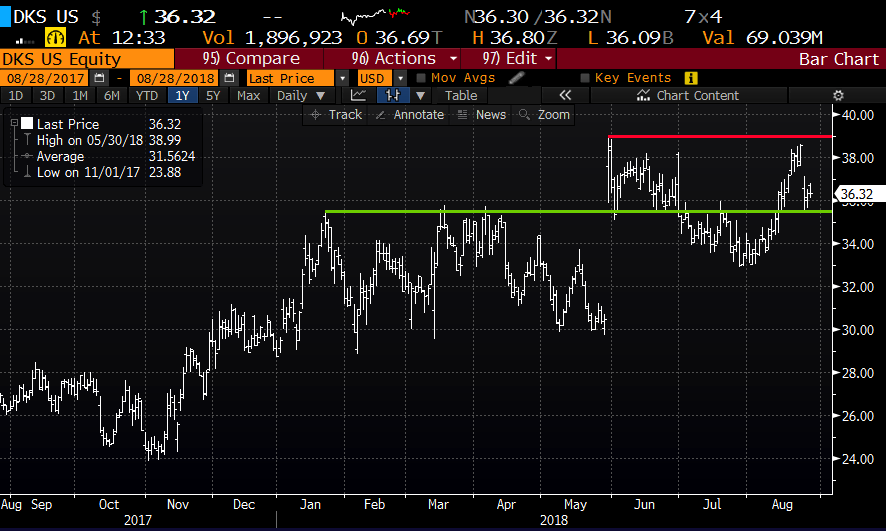 But the ten year chart shows a slightly different picture, that the last year my be nothing more than a dead-cat bounce, possibly struggling just below long-term technical resistance: 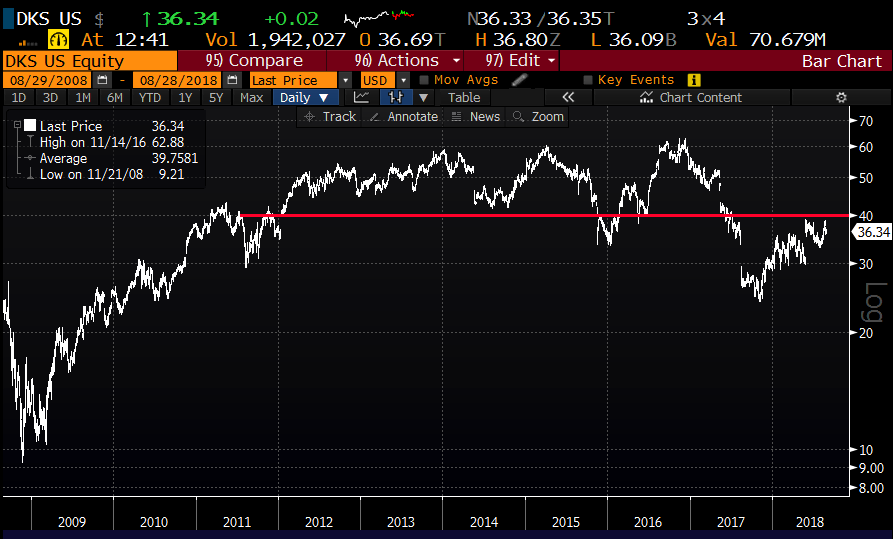 DKS is a cheap stock, trading about 12x expected F2019 eps and at .43x expected F2019 sales of $8.7billion. The problem is that revenue growth that was in the high single digits from 2009 to FY2018 is now expected to be 1 or 2% with eps growth also in the low single digits and same-store sales comps expected to be negative.  Despite cheap valuation, and the stock’s ytd performance, sentiment remains poor with 16% short interest, and Wall Street analysts largely on the sidelines with only 8 Buy ratings, 21 Holds and 1 Sell.

Guidance for back-to-school and the Holiday season will likely be the key driver for the stock near term, and it is worth noting that shares of Best Buy (BBY) are down 6% on a weak guide for Q3 as the company faces difficult year over year comps and increased spending that will weigh on margins, but oddly guided same-store sales for the current quarter to the slowest in six quarters.

Last week DKS sold off in sympathy with weak results and guidance from their smaller competitor Hibbetts Sports whose stock has lost 35% of its value since their print.

So what’s the trade? With the implied move near 10%, long premium directional trades will be very difficult. But let’s run through a few scenarios…

Yield Enhancement vs long stock: If you were long stock, and staying long into the print, overwrites could make sense, selling an out of the money call… for instance.

Losses of the stock below $35.80 as the 60 cents premium received for the call sale will act as a buffer to the downside.

Rationale: one would sell calls against long stock into an event like earnings if they were willing to have profits capped at a certain point, basically if you thought the stock would underperform the implied movement.

Mark to market: this position will show gains as the stock rallies towards or above the long call strike and show losses as the stock declines or goes below the short put strike. On expiration, if the stock is between 33 and 40 both options will expire worthless.

Rationale: one would only sell puts naked short if they were 100% willing to be put the stock at that level in the chance of a decline to or below the put strike, The options market is implying about a 25% probability that the Sept 33 put in DKS could be in the money on Sept expiration. The worst case scenario is that the stock gapped well below the 33 strike and you would suffer losses below 33 plus the time value. But this is the tradeoff between buying expensive options into an event vs the risk of selling options which increase the probability of success but also come with greater risks than defining one’s risk.

Profits of stock up to 40, called away at 40, but can always buyback the short call to keep long stock position intact.

Losses of the stock down to 33 but protected below.

Rationale: one would collar their long stock position if they were more worried about extreme downside than extreme upside.