A few weeks ago Twenty-First Century Fox (FOXA) and Disney’s (DIS) boards voted in favor of DIS’s $71 billion bid for most of FOXA’s assets, essentially knocking out a higher bid by cable rival Comcast (CMCSA).

During the month of June, shares of FOXA rallied from $40 to $45 as CMCSA initially outbid DIS’s $38 a share offer, and then a week later rallied to $50 as DIS upped their bid. 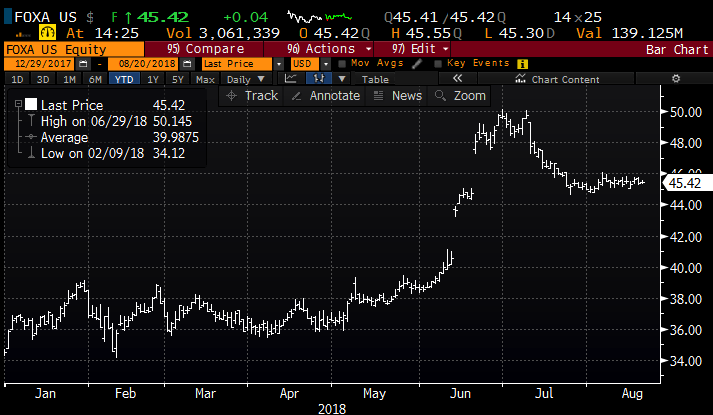 The stock has since settled into the mid $40s as it has become clear that CMCSA is not coming back, and both companies now wait for regulatory approvals.

Here are the legs of the trade, assuming vs 1.5 million shares of stock:

Profits of the stock (assuming against 1.5 million shares) up to $50, profits capped.

Losses of the stock down to $42, but protected down to $35. No protection below $35, but if the stock were below there would have mitigated $6.50 worth of risk, the width of the put spread less the 50 cents premium paid for the hedge.

It appears that this investor used some technical levels to help inform her strikes, $50 as the high, up about 10% as a level to cap gains and help finance the put spread. The $42 put strike that she is now long, less the 50 cents premium paid, so down to $41.50 is the mid-June breakout level on the CMCSA bid, while $35, the level where the investor no longer has protection is a support level the stock bounced off of numerous times in late 2017 and early 2018. 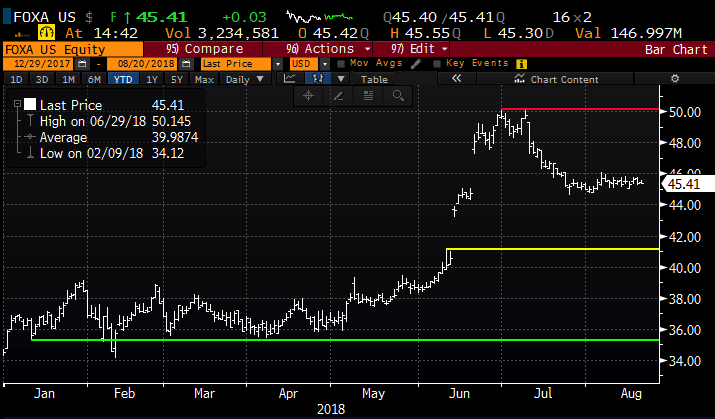