Alibaba (BABA), the Chinese e-commerce giant is scheduled to report their FQ1 results on Thursday, August 23rd before the open. The options market is implying about an $11 move in either direction between now and the close next Friday or about 6.5%, or about double the average one-day post-earnings move over the last four quarters.

Shares of BABA have been extremely volatile in 2018, despite making two new all-time highs this year, the latest in June placing the stock up a whopping 23% on year, the stock has since given it all back, and is now flat on the year, approaching fairly significant near-term technical support: 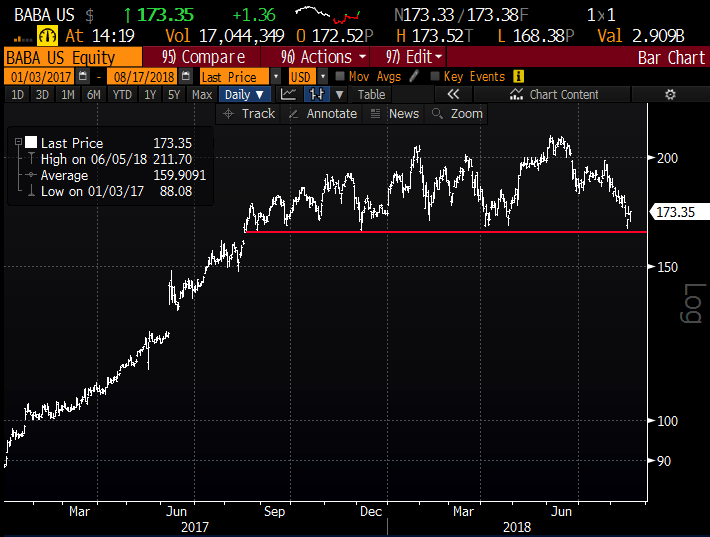 It’s worth noting that the recent weakness in BABA is has been more likely in sympathy with the Chinese stock market which has for now borne the brunt of increasing trade and currency tensions, in massive correction mode, per Bloomberg:

Last night the Shanghai Composite, the fifth largest stock market in the world, closed at a new 52-week low, down 25% from its 52-week high made in late January and quickly approaching a technical support level, that if breached could send ripples through global stock markets: 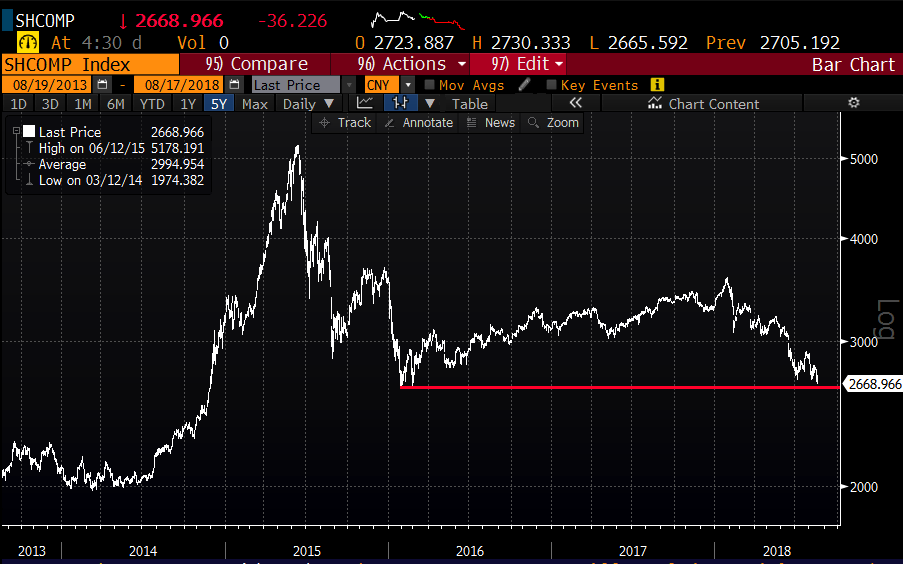 While BABA is flat on the year, Tencent, one of its massive rivals in China, listed in Hong Kong is down 30% from its 52 week and all-time highs in January, down 17% on the year, shedding $180 billion in market cap, but still placing it above BABA’s value at $477 billion: 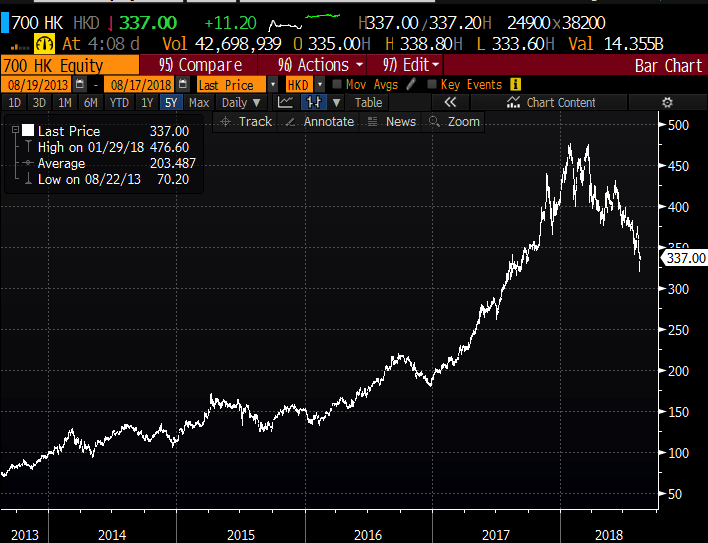 You get the point, China appears to be a shit-show at the moment. But back to BABA, the stock has routinely bounced a little below current levels, and if the company is able to issue decent results and guidance next week, it is likely to do so again.

What’s interesting to me is that despite the stock’s recent weakness, Wall Street analysts have remained overwhelmingly bullish, with 48 Buy ratings, only 1 Hold and No Sells with an average 12-month price target of $240.

Since the June highs in BABA, short data options prices have been rising precipitously, obviously resulting in the fairly high implied move into earnings, relative to recent post-earnings movement. 30-day at the money implied volatility (blue line below, the price of options) is at a fairly wide spread (39.5% vs 26.5%) to 30-day at the money realized volatility (white line below, how much the stock has been moving), suggesting options prices will implode if the stock moves less than expected:

So what’s the trade? If I were inclined to be a bit contrarian, and play for a bounce from 18-month support, and think that a beat and raise and any news about trade tensions between the U.S. and China would benefit investor sentiment towards BABA, then consider the following defined risk strategy:

Rationale: given the potentially volatile event next week and the uncertainty around the impact of trade tensions and the fairly precarious technical set up, it makes sense to define one’s risk. Risking 4.5% of the stock price to possibly make up to 13% if the stock is back towards its recent breakdown level in the next two months.