Cisco Systems (CSCO) will report their fiscal Q4 results after the close. The options market is implying about a 4.5% move tomorrow, which is basically in line with the average one-day post-earnings move over the last four quarters, but below the 5.5% average over the last ten years. With the stock at $43.40, the Aug 17th 43.50 straddle (the put premium + the call premium) is offered at about $1.90, or about 4.4%, if you bought that, and thus the implied movement you would need a rally above $45.40, or a decline below $41.60 to make money. Looking at the one year chart one can clearly see that the implied movement is very much in the recent consolidation range with overhead technical resistance near $46, and near-term support between $42 and $41: 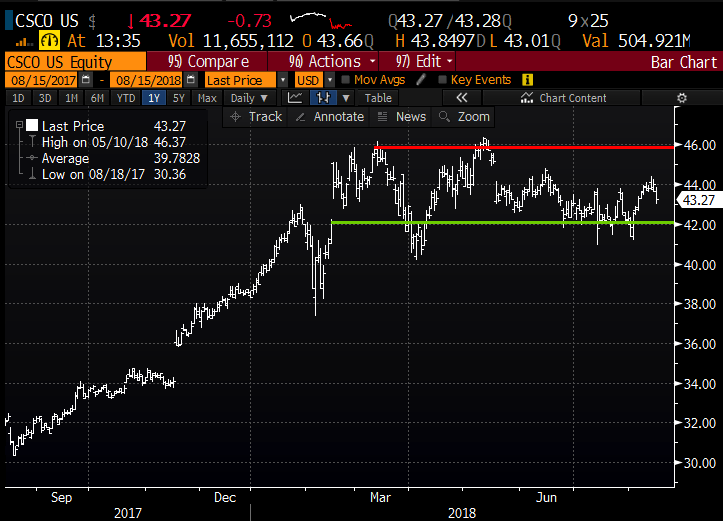 CSCO’s year to date gains of about 13% are basically in line with the performance of the Nasdaq Composite (CCMP) and more than double the performance of the S&P 500 (SPX), not a comment that could be made too frequently in August of any of the last ten years. The stock’s recent outperformance started with their fiscal Q1 earnings gap last November which resulted in the breakout above its pre-financial crisis high: 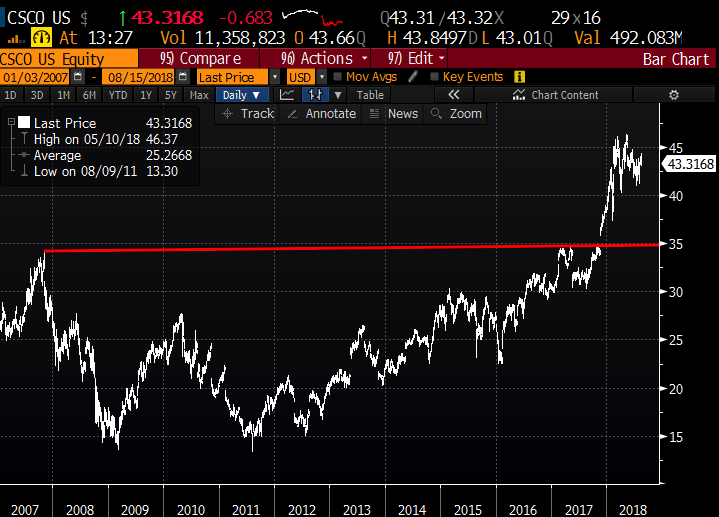 I don’t have a strong view on CSCO at the moment. But let me lay out some quick thoughts. The company is a massive beneficiary of last year’s tax cuts, with much of their $70 billion in cash overseas, their net cash balance is about $40 billion, offering the ability to continue to fund their massive cash return initiative including $25 billion share buyback announced in February and a dividend that has a current yield of 3% and lee-way to make acquisitions like the recent Duo Security to the tune of $2.3 billion. The stock is cheap at less than 15x expected f2019 eps growth of 11% but the current macro environment could pose headwinds to near-term guidance. First and foremost, 40% of the companies sales come from outside North America. The U.S. Dollar’s nearly 4% rise since the company last issued guidance in mid-May could curb their enthusiasm a bit, coupled with the brewing global trade war, and CSCO management might be fairly well cautious given what could be a cooling of global synchronized growth that catalyzed the stock’s breakout of the 10 year base highlighted above.

At this point, I would be shocked if the company were to issue results and guidance that would cause the stock to breakout to new highs above $46, conversely the company’s ability to buy back billions should put a near-term floor in the days following a report that disappoints near the April low just above $40.

So what’s the trade? Two ways to play depending on your near term direction inclination…

If I were inclined to play for a bounce, in line with the implied move I might consider weekly call spreads…

Rationale: this is simple earnings, trade, but binary, risking 1% to possibly make 2.5% if the stock is up in line with the implied move in the next two trading days.

I’ll offer our usual disclaimer into events like earnings, long premium directional trades are a tough way to make money on a consistent basis, you need to get a lot of things right, especially with weekly options, first and foremost direction, than the magnitude of the move and of course timing.