Semiconductor stocks (as measured by the SMH, the etf that tracks the group) have nearly doubled the performance of the Nasdaq Composite (CCMP) and more than doubled the S&P 500 (SPX) since the start of 2016, with gains powered by the combination of strong demand from emerging technologies (IoT, AI/ Cloud/ Datacenter AR/VR, Crypto Mining etc etc) that have lead to a wave of M&A equaling hundreds of billions of dollars. Those factors combined with a raging bull-market for mega-cap tech themes and you have the makings of an investment bubble. But with the trade tensions between the U.S. and China making the likelihood of cross-border deals a dream, and the chance of each other’s regulators signing off on U.S. to U.S. deals, and I suspect we see a pause in M&A at a time where we could also see a cooling in demand given the length of the current cycle and the potential for adverse effects of the brewing global trade war on global growth.

Despite the potential headwinds, Nvidia (NVDA), the poster child for selling their GPUs once thought to be narrowly focused on gaming PCs and consoles has been a leader in emerging technologies like Autonomous driving, AI/Datacenter and Crypto Mining, is just a few percent from its all-time highs made in June, and up 35% on the year, up nearly 700% from the start of 2016. Investors will get a sense for just how hot the sentiment is towards space when they report fiscal Q2 results Thursday after the close. 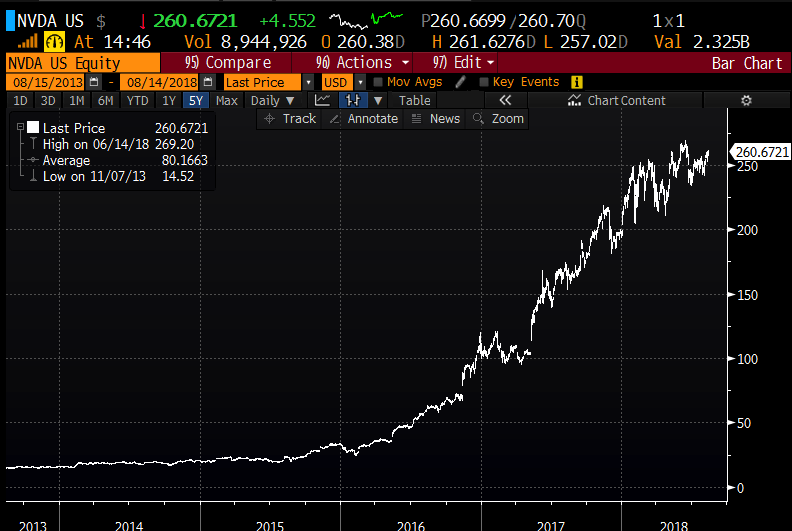 In the meantime, it is worth noting that the market cap leader in the group, Intel (INTC) is down 16.5% from its multi-year highs made in early June, and after an uninspiring second half guide last month, followed by a handful of analyst downgrades since, the stock has broken below the uptrend from its 52 week lows: 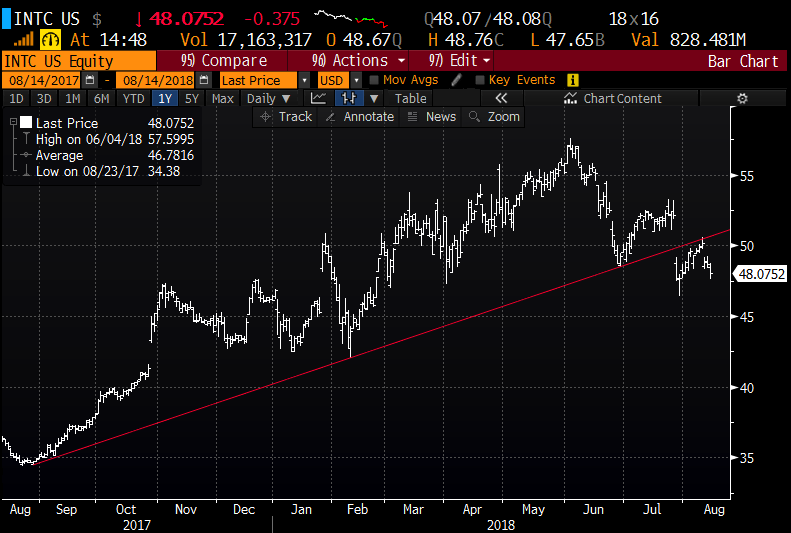 And then there is the eternal value-trap that is Micron (MU), a stock that has been extremely volatile throughout this bull cycle, now approaching key near-term technical support at $50, down 20% from its recent 52-week and 15-year highs made in late May: 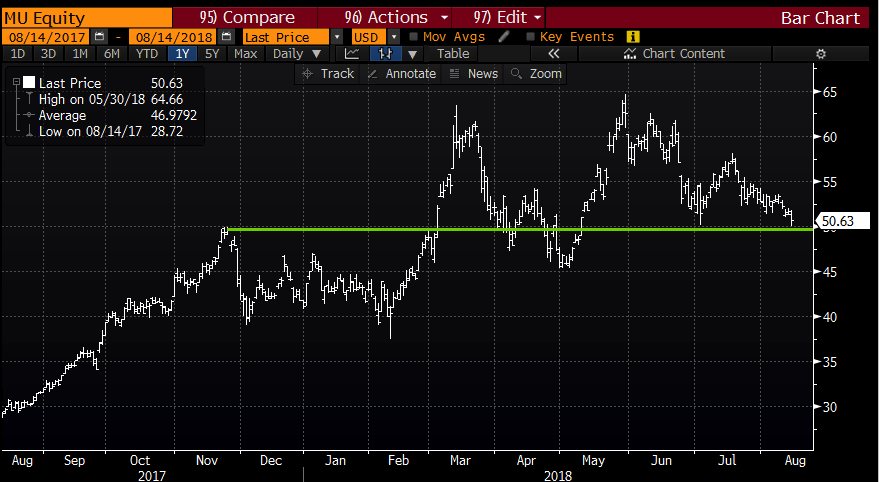 NVDA’s reaction on Friday to what is widely expected to be good results and guidance will likely be telling for the group. There have certainly been outliers of late (notably AMD that I wrote about a couple times over the last could weeks, read here).

To my eye the SMH has a pretty heavy look to it, despite having healthy gains year over year, the etf is in the exact same spot it was at the end of November 2017, looking a little head and shoulders toppy. If the group were to lose the leadership of NVDA, watch out below, SMH will be back at $95 in the coming months: 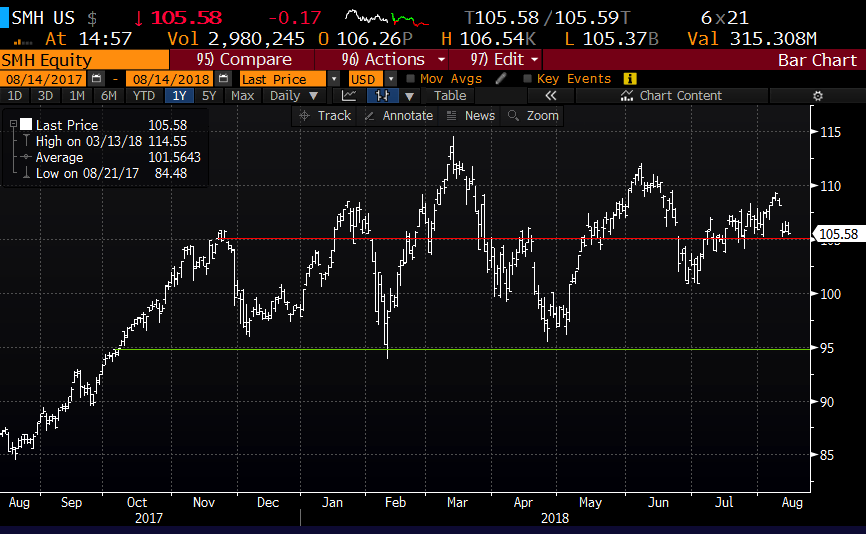 Short-dated options prices are relatively cheap though in the near term, with 30-day at the money implied volatility at 20%, slightly below the one-year average of about 21%, possibly making long premium directional trades attractive for those with a convicted view:

So what’s the trade? If you are inclined to play for a break of near-term support at $105 and a possible retracement to $95 support over the next two months, consider the following trade idea:

Rationale: this trade idea risks 2.3% of the etf price with a break-even down about 3% with a 3 to 1 potential payout if the etf is down 10% in two months.