Disney (DIS) will report their fiscal Q3 earnings today after the close. The options market is implying about a 4.5% move in either direction post results which is rich to its average one-day post-earnings move over the last four quarters of about 2.2%. With the stock at $117, the Aug 10th weekly 117 straddle (the call premium + the put premium) is offered at $5.30, if you bought that, and thus the implied weekly movement which is elevated into the print, you would need a rally above $122.30, or a decline below $111.7) to make money.

Obviously, if you were looking to express a defined risk directional, at the money view into the print, the $117 weekly call costs $2.65, and the $117 weekly put costs $2.65, or half the straddle and you would need about a 2.25% move in the right direction by Friday’s close to make money. As we usually highlight, this is a tough way to make money, long premium options strategies into events. IN the case of just playing for greater than expected movement there is a lower probability that you have a total loss of premium, but in the case of picking a direction with calls/puts or vertical spreads, you need to get a lot of things right to avoid not having a total loss, first and foremost direction of the stock, the magnitude of the move and of course timing is always ticking away.

It’s worth noting that DIS year to date gains of 9% are for the first time in a few years out-performing the 7% YTD gains of the S&P 500, and the stock’s 20% rally from the 2018 lows as caused the stock to break out of its 2 year trading range: 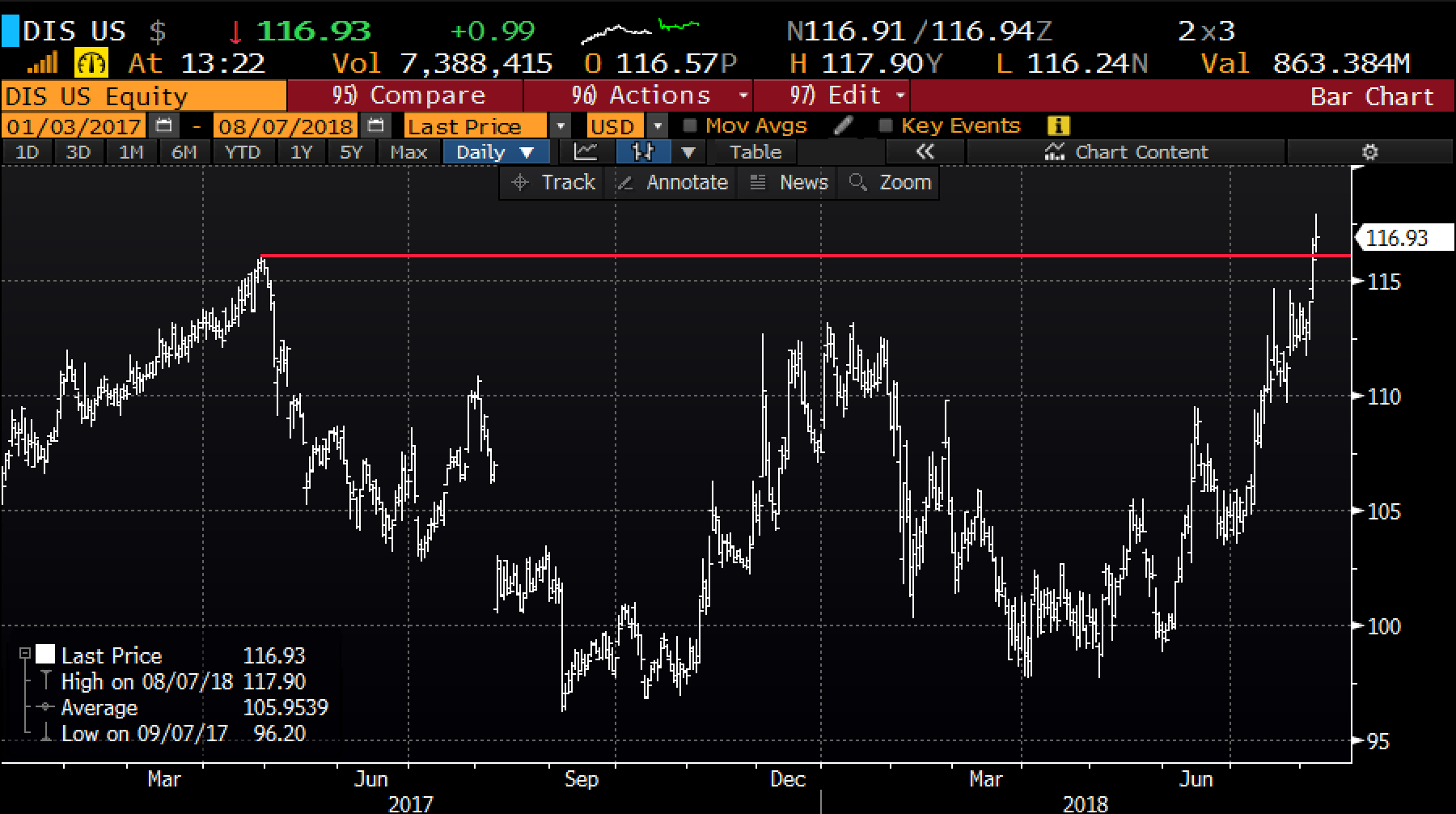 It is also worth noting that this recent breakout has placed the stock above the downtrend that had been in place from the all-time highs made in the summer of 2015, exiting a long established wedge pattern, putting those prior highs clearly in the sights of traders: 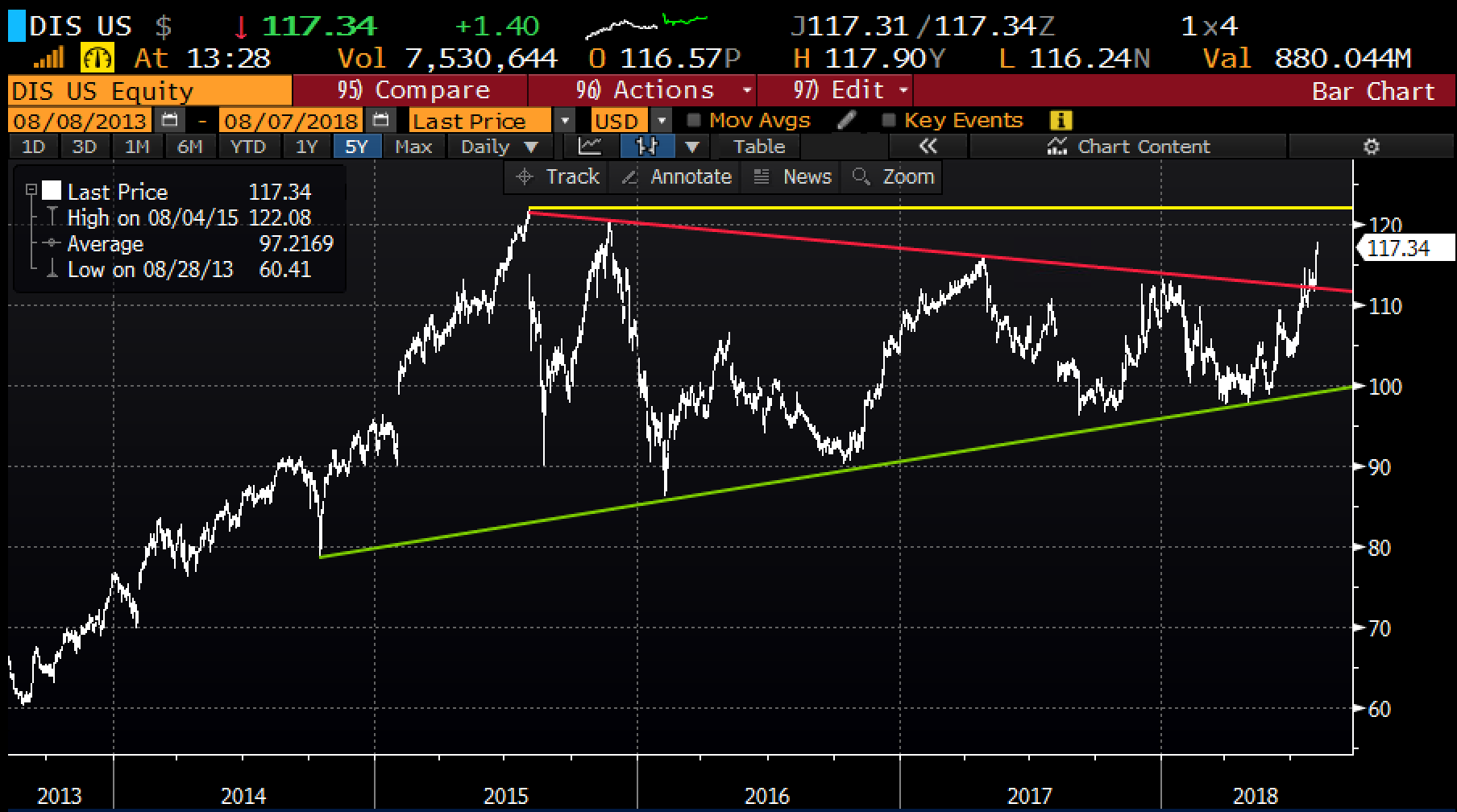 We have been positively disposed to shares of DIS since early May, prior to its FQ2 print (read here) where we detailed a bullish call calendar strategy playing for a stair step move higher in the shares into Sept, with an update here.

DIS is up considerably since early May as investors seem to agree that the Mouse House is getting its act together. and a clearly laid out strategy on their over the top offerings and how they plan to integrate FOX assets could send the shares to new highs into the fall.

Disney is building the streaming service as part of a make-or-break plan to address threats to its vast television business.

The stock’s rise of late might suggest investor optimism about more clarity on this service, but I suspect it is probably a little too soon before the FOX closure.

If I were inclined to play for new highs, and was considering staying long or biuying the stock here I might consider the following trade idea which could mitigate short-term vol crush after results, offer leverage to a sharp upside move while risking less than 1% of the stock price between current levels and $110:

Losses of 20 cents paid for structure below 120.20, worst case scenario stock is 110 or below on Sept expiration and you are put 100 shares of stock per 1 put contract short and suffer losses below.

To put the risk of the short put in place, the options market is saying there is only about a 20% chance that the Sept 110 put will be in the money on Sept expiration.

Or If you are long the stock and are seeking short-term protection at little cost, would like the opportunity to participate in some near-term upside, but want to define your risk for the next month consider collars… for instance:

Profits of the stock up to 122 (less the 15 cents paid for structure), which is essentially the prior all-time high from Aug 2015. The stock might see some technical resistance at those levels.

Rationale: the only reason a long holder would collar their stock into an event like earnings is if they were willing to give up some potential upside for defined risk below a certain point. Put another way, you are more worried about extreme downside than extreme upside.

Lastly, if the stock is at or above the short call strike and you want to keep the position intact (ie not called away, matching up 100 shares per 1 call contract short on expiration) then you would merely cover the short call.