Activision (ATVI) will report their Q2 results today after the close.  The options market is implying about a 5.3% one day move tomorrow, or about $3.90 in either direction, which is well above the average over the last four quarters of about 2.7% but generally in line with its ten year average of about 5%.

Shares of ATVI have had a fairly volatile year so far, trading in about a 30% range, despite being down about 10% in the last couple weeks, the stock is still up about 16% on year, dramatically outperforming peer TakeTwo Interactive (TTWO), and mildly underperforming EA’s 21% ytd gains. While ATVI’s new high last month was nothing short of impressive, its quick failure and fairly dramatic 10% decline might firmly make $80 formidable technical resistance going forward: 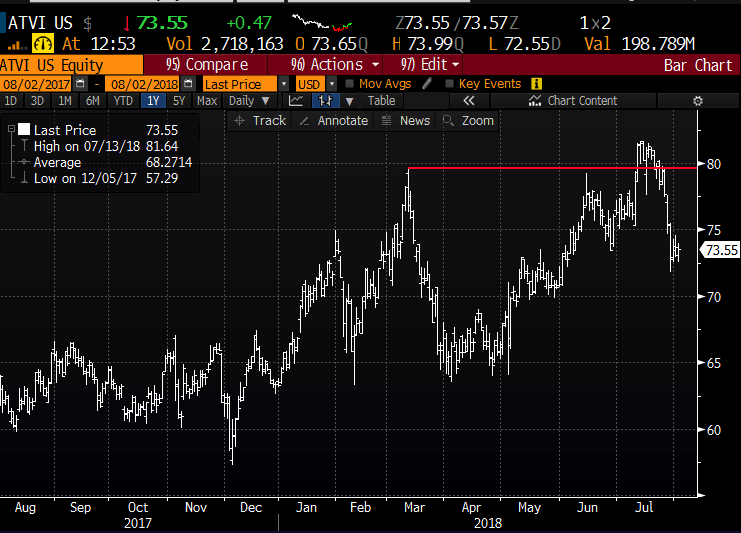 TakeTwo Interactive (TTWO) will report their fiscal Q1 results today after the close.  The options market is implying about a 6.7% one day move tomorrow, or about $7.50 in either direction. The stock has been very volatile post-earnings over the last year, with three moves of greater than 10%, despite last quarter the stock moving less than 1%.

Shares of TTWO have had a fairly volatile year so far, trading in about a 30% range, despite being only up a couple percent in 2018, having just failed last week at its prior all-time from back in February, shedding about 12% in the last week alone: 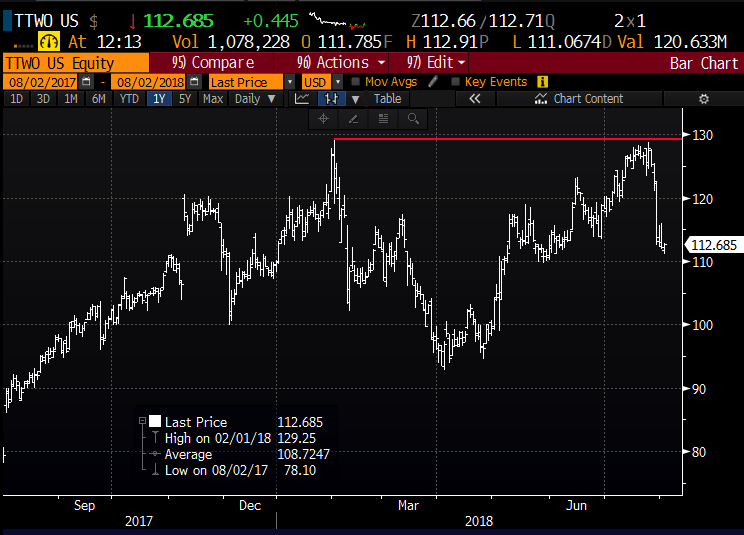 So why the sharp drops in both stocks in the last two weeks? I think Bloomberg put in best after EA’s disappointing results on July 25th:

(Bloomberg Intelligence) — RECENT EVENT REACTION: Weaker-than-expected digital net bookings from live services and mobile in EA’s fiscal 1Q19 may point to signs that the rise of Fortnite is having a bigger impact on time and money spent on EA’s key games. EA has promising new releases later this year that can bring back users, but it’s a show-me story now.

Post-1Q Earnings Outlook: Electronic Arts’ slowdown in digital live services and mobile net-bookings growth is raising concern that results will come in below views for fiscal 2019. EA needs to maintain double-digit growth of these segments to reduce its reliance on big-hit games in order to justify its elevated P/E multiple. It still has a promising pipeline of new games that will ramp up later this year, and we think its guidance for sales and earnings for the year remains conservative given these titles. Rising headwinds from Fortnite taking share of time spent playing and from currency fluctuations are also weighing on results in the near-term. But we believe that new releases — mainly FIFA 19 with the Champions League license, Battlefield V and Anthem — can help EA recapture share of time and dollars spent. (07/26/18)

I expect this to be a theme in both of the reports this evening, but I guess the big question is whether or not the weakness since EA’s results covers some of the adverse effects of Fortnite?

Heading into EA’s print, short-dated options prices hit multi-year highs, as the stock was making all-time highs, highlighting options traders fear of a disappointment. Since the print and the stock’s subsequent decline options prices have gotten murdered, and we will see the same following ATVI and TTWO results, making short-dated long premium directional strategies a hard way to make money: 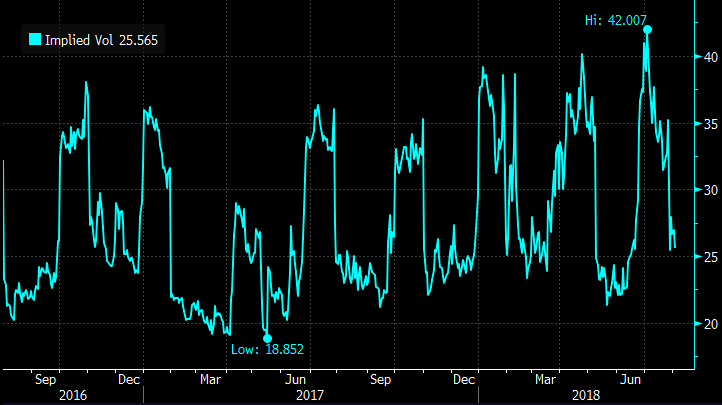 One way to play for a near-term bounce in line with the implied movement, while also taking advantage of elevated near-term options prices, and possibly set up for a re-test of the recent highs is to long call calendars. For instance:

This trade idea performs best if the stock is around 77.50 on Aug expiration in two weeks.  If the stock is 77.50 or below the short Aug call will expire worthless and you have financed the purchase of the Sept call which will have gained in value as a result in the delta of the option increasing, with post earnings vol crush offset by the premium received for the short Aug call.

The max risk of this trade is the 90 cents in premium spent, with worst-case scenario a dramatic move lower or higher above the 77.50 strike. If the stock is above 77.50 the short Aug call can be covered, the whole position taken off, or rolled. Often times I like to roll out of the short leg of a calendar and turn the long leg into a vertical call spread, further reducing the premium at risk. I would do that if I thought the stock would have more follow-through.

In this case I am targeting the implied move for earnings and this trade would still be profitable on a mild move higher as the short Aug call would decay much faster than the long Sept call.

This is a relatively low risk, low reward trade idea, but for those who think bad news is in the stock, could see a relief rally in line with the implied move, but might consolidate before makes a run after the summer back the prior high, this trade structure makes sense.

In the case of TTWO….

The commentary above applies…

Max risk of 1.90 with worst-case scenario a dramatic move lower or higher above the 120 strike.

This is a relatively ow risk, low reward trade idea, but for those who think bad news is in the stock, could see a relief rally in line with the implied move, but might consolidate before makes a run after the summer back the prior high, this trade structure makes sense.