The top five holdings in the Nasdaq 100 ETF, the QQQ make up about 36% of the weight of the tech-heavy ETF:

These five stocks have a combined market capitalization of $4 trillion, a shade less than the entire market cap of China’s Shanghai Composite at $4.4 trillion.

As I write it seems that financial media outlets are obsessed with Apple’s fate of becoming the first public company to reach the $1 trillion market ($971 billion as I write), which at this point appears to be a foregone conclusion. I would add that AMZN, GOOGL and MSFT all hit all-time highs following their Q2 results last week, all have market caps of over $800 billion, but all have filled in their entire post-earnings gains, with average declines from last week’s all-time highs of about 5%. And then there is FB, trading down 23% from its all-time highs made the day of their Q2 print, losing about $125 billion in market cap, and desperately trying to find a bottom. Which leads me back to the QQQ, which AAPL is keeping up on the day, albeit fractionally, and just above what I would call important near-term support at $175, the intersection of the uptrend from the April lows and the prior breakout levels: 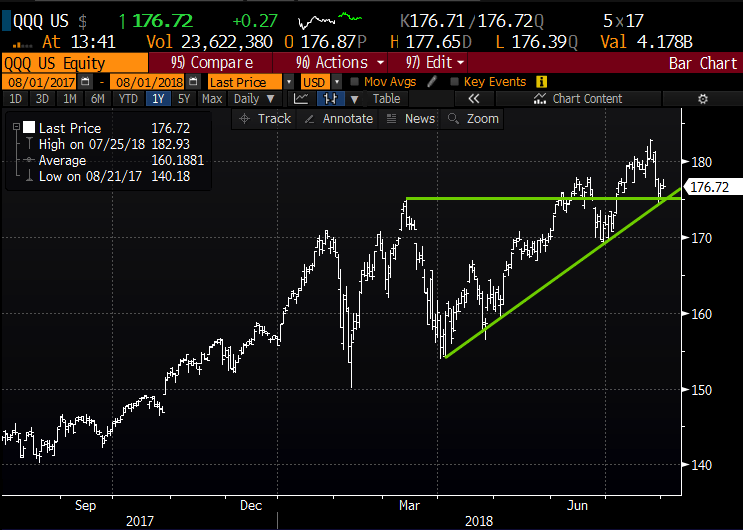 The combination of investors and media fascination with AAPL topping $1 trillion, and the generally mixed sentiment as it relates to some key themes in technology leads me to believe that we may be very near a near-term top in tech stocks, I am really not sure who is the incremental buyer is AAPL, AMZN, GOOGL & MSFT and equally unsure who is inclined to step into stories like FB and TWTR that this time around might stay in the penalty box for at least the near future. I would also add that murmurs about growing steam for an anti-trust push against AMZN and parts of their retail operation also subject to bad actors helping to spoof pricing, which might be the tip of the iceberg to similar but different issues facing social media platforms like FB. Oh and do you really think GOOGL will not find themselves having to spend aggressively to combat misuse of their search operation and Youtube? I guess the point here is that the issues that brought FB and TWTR investors to the realization last week the valuations might have gotten ahead of fundamentals could very well seep into AMZN and GOOGL. If you think there is a possibility of a sort of snowball effect and that AAPL and MSFT have no real incremental buyer despite firing on all cylinders than the best way to play is through the QQQ. For those looking to make defined risk directional bets, short-dated options in the QQQ appear cheap to its recent movement, with 30-day at the money implied volatility (blue line below, the price of options at about 16.5%) just a tad above 30-day realized volatility (white line below, how much the etf has been moving at 16.2%). 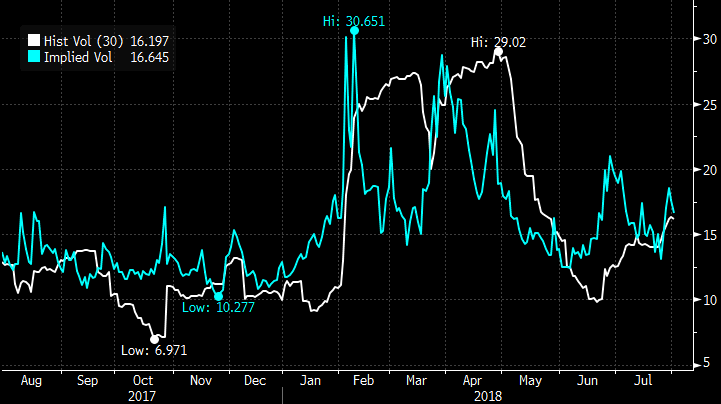 So what’s the trade? If you think tech stocks tops out soon and a technical break of the levels highlighted above cause a pullback in the QQQ in the coming months then considering the following trade idea.

Rationale: this trade risks a little more than 1% of the stock price with a possible payout of 4 to 1. This trade structure is vol and dollar cheap.