On Friday (read here) I detailed a collar strategy for long holders of Apple (AAPL) who are interested in no cost protection into tonight’s, but willing to give up potential profits above a certain level to gain defined risk below a current level, I also described the strategy on CNBC’s Options Action:

In my post on Friday, I highlighted the hedge strategy and the movement expected in the options market, but I wanted to quickly highlight some of the drivers that could cause the stock to move greater than the 4% implied move, which happens to be in line with the average movement over the last four quarters.

First things first, let’s address one of the major pillars of the bull case for the stock, repatriation and cash return. Back on May 1st when the company reported their fiscal Q2 results the company suggested they would bring onshore most of the $250 billion in cash and return an additional $100 billion to shareholders in the form of Buybacks and dividends. This number was below what some investors and analysts had expected, but management did suggest they would look to get to equity and debt neutral which could take years given the $145 billion current gap and the fact that they generate tens of millions of cash a year. As of this quarter, the company will have returned an astounding $290(ish) billion to shareholders since starting their capital return program in mid-2012: 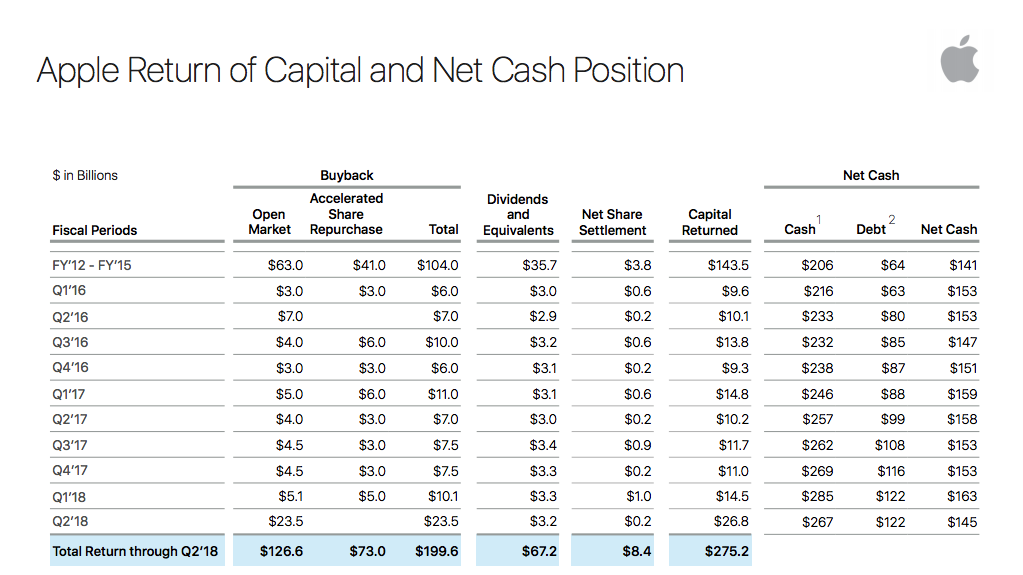 As for the operating business, when the company reported in early May, they offered the following guidance:

Gross margins are always an investor focus, oftentimes dipping into new product cycles, as will be iPhone Average Selling Prices (ASPs) which analysts see a tad below $700. Of particular focus last quarter was Services topping $9 billion in the quarter, making up 15% of their total sales, growing 31% year over year. Services, and Other Products which includes Watch and AirPods will remain a strong focus as they are the only two categories experiencing rapid growth, combined totally 21% of the total last quarter, greater than iPads and Macs combined. It appears that investors are willing to overlook near-term iPhone unit weakness into what is likely to be an expanded staggered offering in the fall in place of a second consecutive rebound in China and flat sequential Services growth.

On top of the Hedge Idea for long holders from Friday, I thought I would add a leverage trade idea also for longs and thoughts on the implied move.

First, if you were inclined to think the stock, which you own would rally a little more than the inclined move you might consider overlaying a 1×2 call spread to your position… for instance:

Losses of the stock below current levels plus the 22 cents premium paid for the overlay strategy.

Rationale: this overlay takes advantage of the relatively high options prices into the print, while adding very little risk to the trade (22 cents in premium) while also potentially capping gains, up 11% which is a very small probability event.

On the implied move, it’s important to remember how we figure it, take the at the money weekly straddle (the call premium + the put premium) and divide by the stock price. With AAPL at $191.80, the stock Aug 3rd weekly straddle is offered at $8.20 (3.8o on the call and 4.40 on the put). If you bought the implied move you need a rally above $200.70, up 4.5% or a decline below 183.60, or down 4.3% to make money. But in both cases, if you were inclined to make an at them money defined risk (but binary) bet into the print you would just be risking half the implied move, the value of the call or the put. This action should really only be done for those who are very convicted on direction, or very worried and feel the need for put protection.

Lastly, one of the reasons we are generally cautious on long premium directional earnings trades is that you need to get a lot of things right to just break-even, first and foremost direction, then the magnitude of the move and of course timing. Which is why doing this with weeklies is very binary, get the direction wrong and the probability of a total loss of premium is very high.