Tesla (TSLA) will report their Q2 results on Wednesday after the close. The options market is implying about a $27 or about 8% move in either direction, which is slightly rich to the average of about 7% over the last four quarters, but below the 10% average since going public back in 2010.

Despite the stock only being down about 3% on the year, it has been a volatile year so far with the stock recently selling off about 20% from its recent 52-week high made last month, but also up about 22% from its 52-week lows made in April. 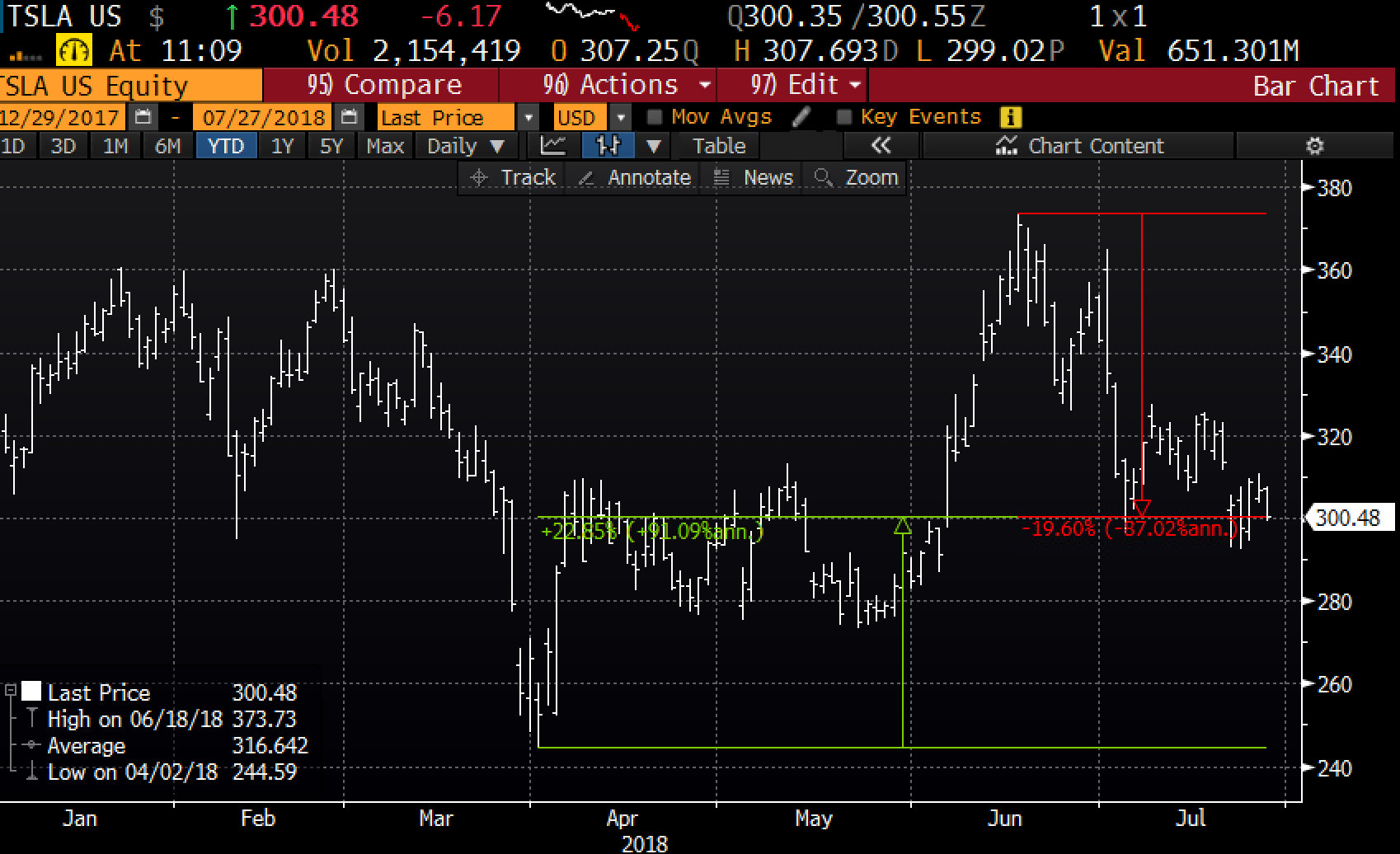 There has been no shortage of controversies this year, ranging from the company’s ability to meet prior Model 3 delivery guidance and price points, report this week from the WSJ that the company is trying to get cash back from vendors in an effort to get to profitability, which leads to their persistent need to raise cash to stay afloat, to the increasingly erratic behavior of founder CEO Elon Musk.

But there was a Bloomberg Opinion piece this week that was sure to catch the eyes of TSLA bears who have been as focused on their credit as they have been on their equity:

The cost to insure against Tesla failing to make debt payments surged this week, with five-year credit-default swaps implying a 42 percent chance of a missed debt payment in the next half-decade. As Bloomberg News’s Claire Boston reported, at those levels, it costs about $2 million to protect $10 million of debt. The derivatives go so far as to imply a 10 percent chance of default in the coming year, even though Tesla projected adequate liquidity for at least 12 months in its first-quarter filings. 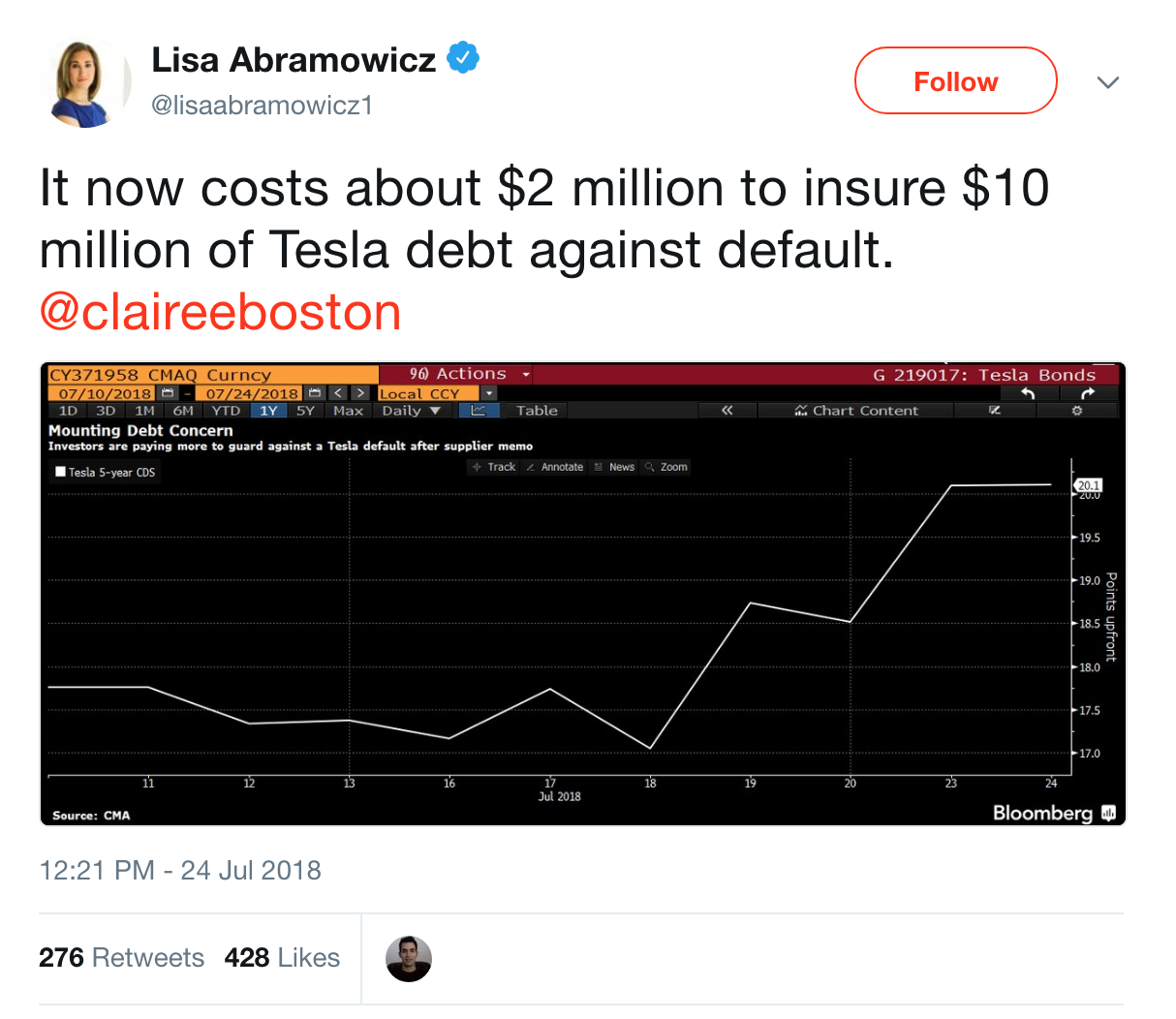 OK, you get the point, the story has some flies on it. Just as Elon is one of the key reasons bulls have remained committed, he is also the lightning rod that has caused the bears to dig in… oh and there is a new bear the Big Short guy, Steve Eisman.

To be very honest I don’t have a strong feel for the stock here, but I would say that if Elon could be less visible, make less aggressive assumptions and stop his war with the press, the shorts and British divers who saved young Thai soccer players, and just shore up Model 3 production to sustainable levels and do what needs to be done to quiet the bears about the health of their balance sheet, then the stock should be ok, with 28% short interest and nearly 40% of the float held by the top three holders (20% by Musk).

So I get two questions frequently about TSLA, how to use options to hedge a long position or make a bearish bet with defined risk. For the purpose of this post, I am going to focus on the hedge as the stock is down 20% in the last six weeks in front of a potentially volatile earnings event that might shed some light on the issues detailed above that are facing the stock.

Profits in the stock up to $350, profits capped and stock called away at $350 or higher.

Losses in the stock down to $250, protected below.

Rationale: if the stock is $350 or higher on Sept expiration, and you want to keep the long stock position in place then you would merely cover the short call. One would do an overlay like this against a long stock position if you were more concerned with the potential for extreme downside opposed to a dramatic rise in the shares.

While $250 might seem like a long ways away, if the company were to have a material guide lower and need to raise cash which would likely be very dilutive, there could be a good chance that the stock would retest its 2018 lows near 250, which to my eye would be massive long-term technical support, and a level I might want to be protected below if I were long for the long haul: 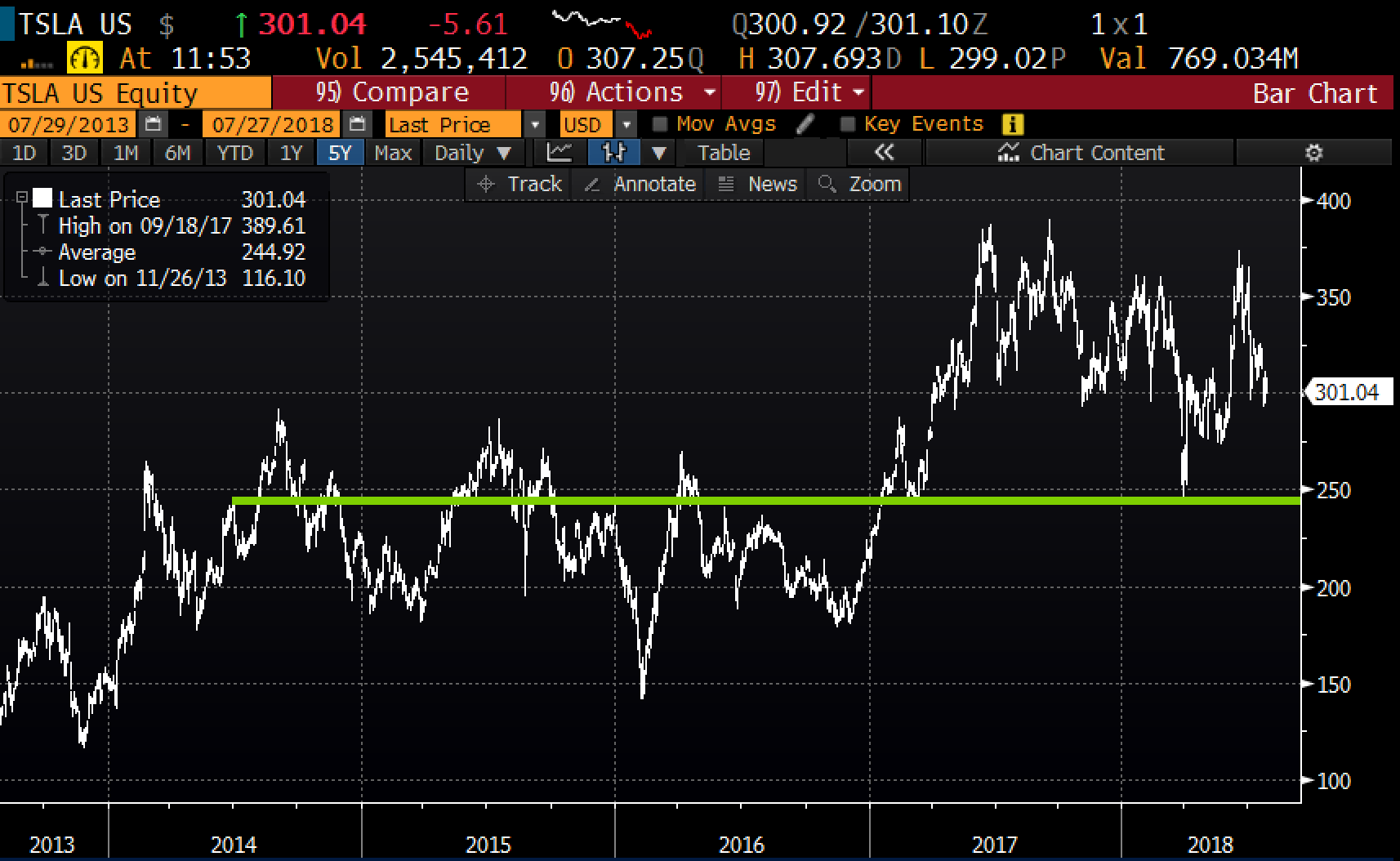