Let’s begin with the broad market… 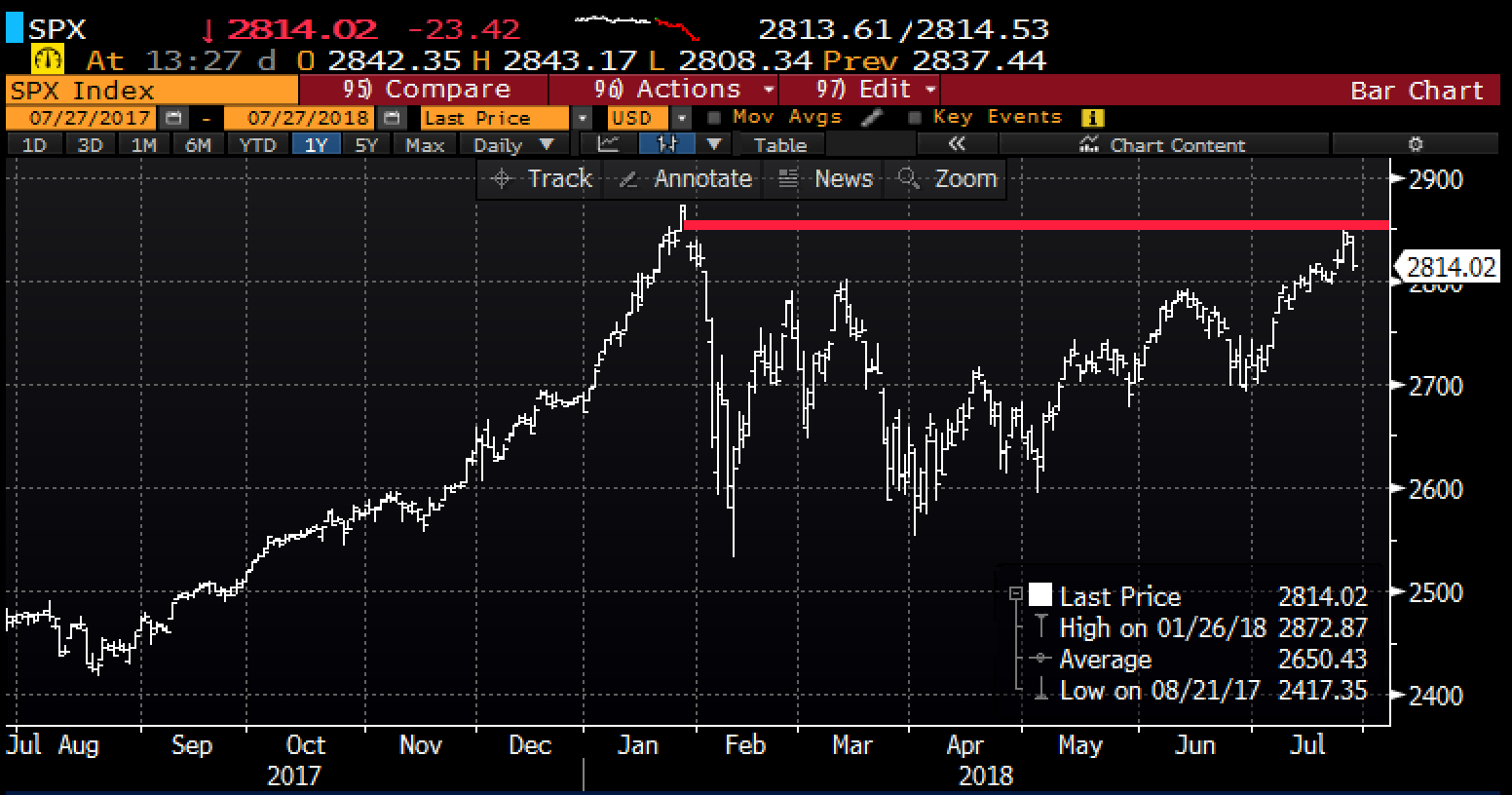 I have no idea, but it is interesting that the SPX failed today, after the most telegraphed 4% GDP print the world has ever seen with the president conducting something similar to a campaign rally in the Rose Garden of the White House touting all HE has done for the U.S economy to get us to a place where we have been under both of his predecessors.

What’s interesting about today’s price action is that it comes as we are through the bulk of Q2 earnings from the largest companies in the SPX, all but Apple who is scheduled to report FQ3 earnings on Tuesday after the close. While FANG results and the stocks’ reaction was a bit of a tale of two cities, I think it is safe to say that investors should be focused on the surprising outsized moves to the downside by Facebook (FB) and Netflix (NFLX) as opposed to the fairly moderate upside moves by Alphabet (GOOGL) and Amazon (AMZN)… albeit to new all-time highs. With the market just rejected very near the prior all-time highs, FB’s 20% decline yesterday, the largest in market cap terms ever ($119 billion) is significant because these two stocks have been darlings of the bull market and it is less than bullish to lose leadership as it has been narrowing at failed attempts to new highs (IMO).

So this places additional pressure on AAPL, that is not exactly evident yet in the options market which is implying about a 4% one day move following results Tuesday, which is slightly lower than its 4% average one-day post-earnings move over the last four quarters.

Prior to earnings I will offer a preview which includes my views on the company’s valuation, but given the divergences we have had in FANG and the broad market action today, I think it makes sense to detail a hedge idea for long holders, not too dissimilar to the strategy I detailed earlier today in Tesla (read here).

While I think there is a very high probability that AAPL with a $942 billion market capitalization will be the very first stock to tick $1 trillion (not exactly going out on a limb here) I do think given FB’s very unexpected decline this week, and the fact that AAPL has had two sizable peak to trough declines this year (16% from late Jan to early Feb and 12% from mid March to early April) I think it makes sense to consider protection for those who want to keep their long stock position intact, have the potential to participate in gains to a certain point but also have their risk defined to a certain point to the downside.

So what’s the hedge?

Rationale: if the stock is $200 or higher on August expiration, and you want to keep the long stock position in place then you would merely cover the short call. One would do an overlay like this against a long stock position if you were more concerned with the potential for extreme downside opposed to a dramatic rise in the shares.

To my eye, Apple’s chart is fairly constructive, since breaking out of its few month range following Q2 earnings the stock has consolidated above the prior range, possibly building steam for a march to $1 trillion into the fall’s iPhone cycle. But the stock’s recent rally from $181ish places that as clear support, and yesterday’s high as obvious near-term resistance: 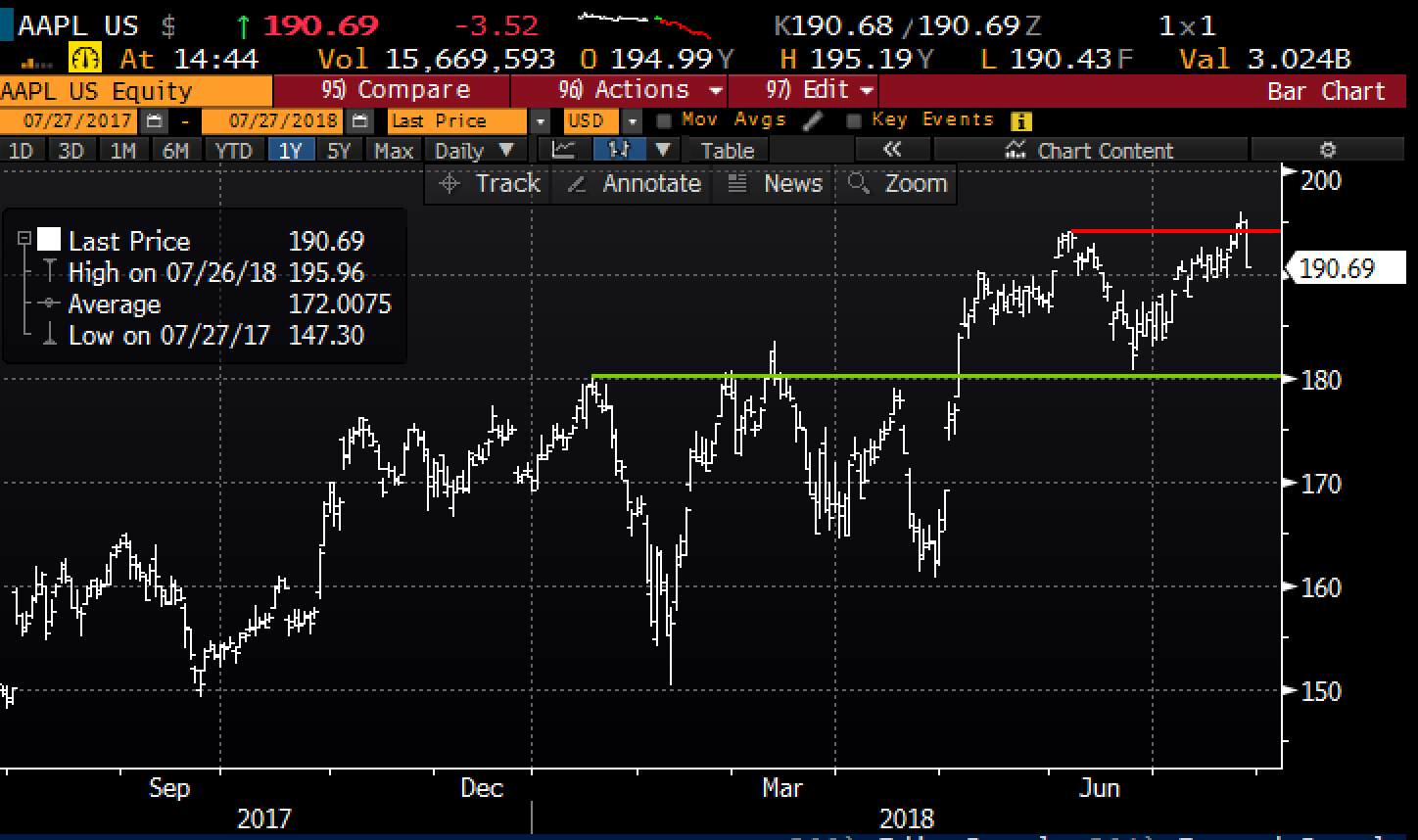