Today after the close AMD will report Q2 results. The options market is implying about a 10% one day move tomorrow, which is basically inline to its 9.5% average over the last four quarters. With the stock trading at $16 the July 27th weekly 16 straddle (the call premium + the put premium) is offered at about $1.65, if you bought that, and thus the implied move between now and Friday’s close you would need a rally above $17.65 or a decline below $14.35 to make money.

Shares of AMD are up a whopping 55% year to date, and up an eye-popping 76% from its 52-week lows made in early April. Prior to its recent bottom, the stock look as if it was going back to being a hat-size for some time to come in the mid-single digits, making a series of lower highs and lower lows since the start of 2017. To my eye, the $16 (ish) breakout level is important near-term technical support, while $14(ish), the May breakout level above the prior 2018 high will be the next real support level: 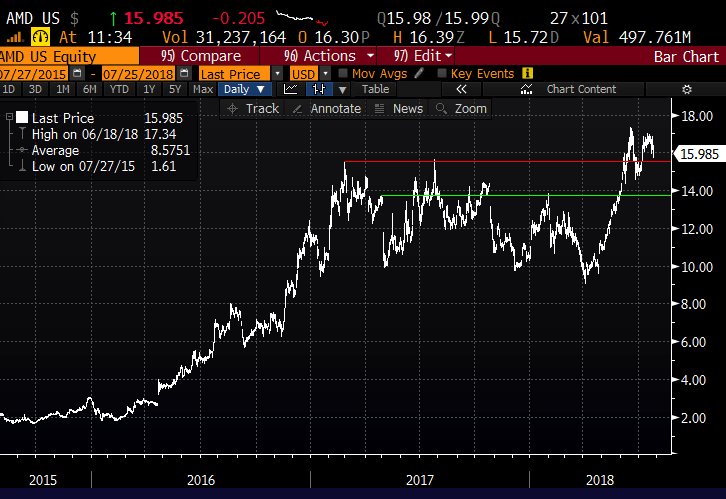 Wall Street analysts are fairly mixed on AMD, despite the stock’s ytd performance with 12 Buy ratings, 13 Holds and 5 Holds with an average 12-month price target of $15.50, below where the stock is trading. Investors also seem mixed with short interest near the highest levels of the last year at 18% of the float.

John Pitzer, Credit Suisse’s highly ranked Semiconductor analyst who rates the stock Neutral with a $13.50 price target highlights what should be continued headwinds of GPUs for crypto mining offset by market share gains with new server chips that are benefitting from some mishaps at Intel. They remain cautious on valuation despite expectation for an inline quarter.

It is safe to suggest that the stock’s price action suggests high expectations into the print and with Bitcoin’s recent resurgence, the company might have slightly more optimistic tone on the crypto space in the second half of the year. As for share gains in servers, Pitzer notes that is in the stock at current levels.

I have thought this for a while, and I have no real reason to bring it up again aside from writing about the stock before earnings. But given the hundreds of billions of dollars in M&A in the semiconductor space over the last few years, it surprises me that AMD has not been a serious take-over candidate given their rivalry with Intel in PCs and servers and their competition with Nvidia (NVDA) for datacenter/AI chips and in the crypto space. While earnings have been volatile over the last few years, with GAAP earnings negative from 2012 to 2016 (slightly profitable now), sales are expected to get back above their 2011 peak of $6.5 billion this year. The company’s balance sheet is in good shape, some might say under-levered with $1.38 billion in debt vs $1.05 billion in cash on a $15.5 billion market cap, trading 2.3x sales, well below the average of m&a in the semi space over the last few years. But let’s revisit this conversation after earnings…

So what’s the trade: If I were long I might consider protection, or if you want to play for a miss and guide lower, consider the following trade idea:

Rationale: this break-even is fairly far out of the money, down at 14.90, down 7.5%, but offers profit/protection potential of up ~9% of the stock price down to key technical support. Oh and with the stock up 55%, it would not be unusual to see the stock down 20% in a month if the company were to miss and guide down.

As for a take-out trade, as opposed to buying the stock here, Risk Reversal, selling an out of the money put to finance the purchase of the out of the money call or call spread, for instance…

Rationale: if you are playing for a take-out, a low probability event that is very difficult to time and price, this trade idea is preferable in my opinion to buy the stock after a 75% run off of the 2018 lows. There is a very wide range on Oct expiration where the trade is neither profitable or a big loser. BUT I THINK IT MAKES SENSE TO WAIT FOR EARNINGS AND GUIDANCE BEFORE SETTING UP A TRADE LIKE THIS.