Facebook (FB) will report their hotly anticipated Q2 results on Wednesday, July 25th after the close. The options market is implying about a 5% move in either direction or about $30 billion in market capitalization. On average since going public in 2012, the stock has moved about 6.5% the day following earnings, and had an astounding 9% rip following their Q1 report in the middle of April while the stock was trying to recover from the Cambridge Analytica data scandal. Well recover it did, rising 40% from its 52-week lows made in late March to current levels, with a very convincing breakout above the prior all-time high made in early February: 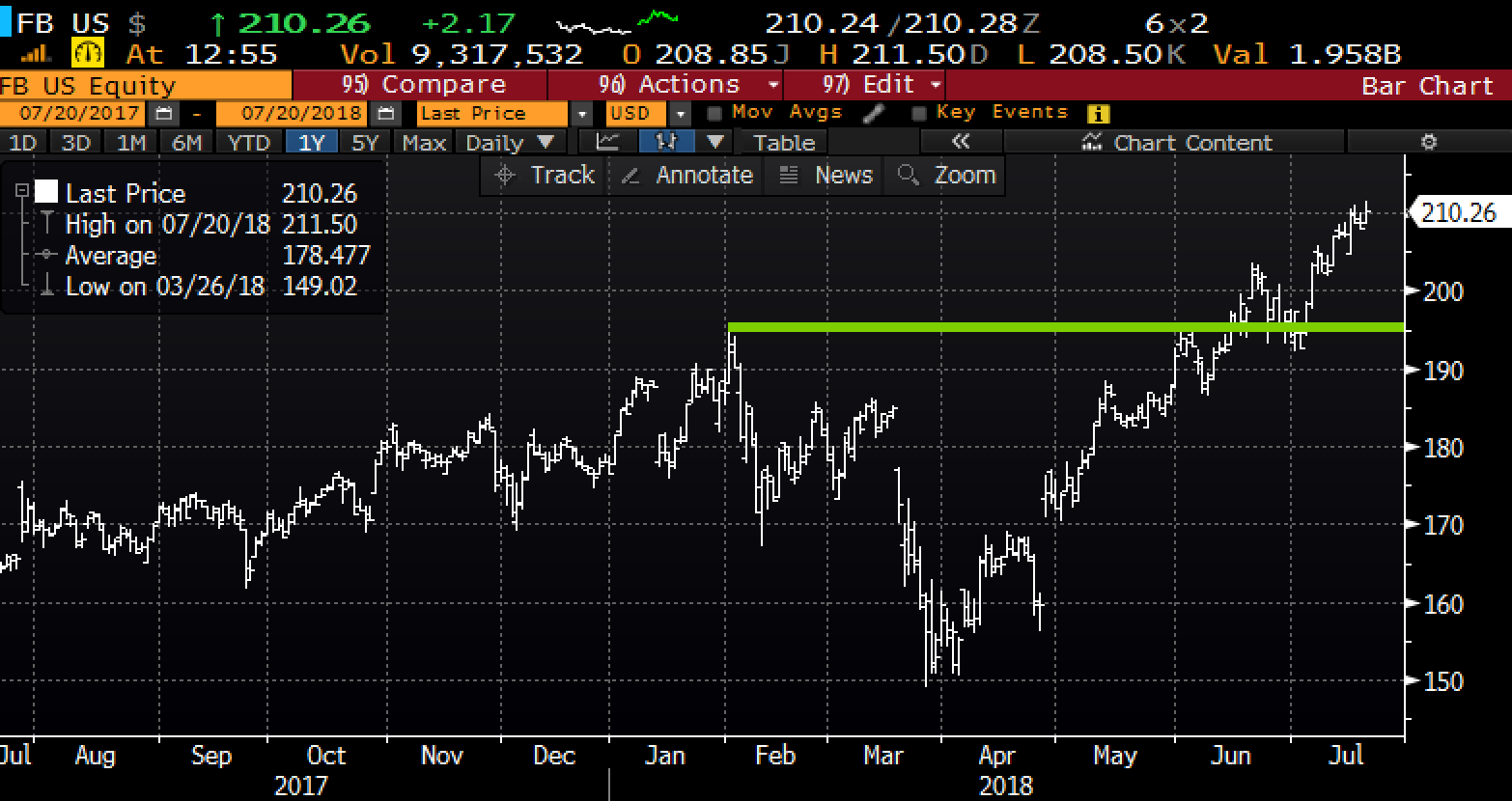 Expectations into the print are clearly high as evidenced by the stock’s performance of late, and despite all of the headlines about how their platform was manipulated in 2016 election, analysts do NOT care (44 Buy ratings, only 2 Holds and 2 Sells) about anything other than their growth rate and valuation that the company has clearly grown into. FB shares trade at 27x expected 2018 eps growth of 24% and 23x expected 2019 eps growth of 20% on an astounding sales growth rate of 40% and 27% respectively.  EPS estimates have come down since the data scandal as the company has repeatedly stated that their efforts to protect their platform will adversely affect profitability. On their Q3 call last November, before the Cambridge Analytica scandal was revealed the company had already started raising their headcount on security, from 10,000 to 20,000, per WSJ:

“It takes a lot of engineering investment, and we will be prioritizing that, in some cases by adding people to teams and in other cases by trading off and doing more security work instead of other product work that we might have done, ” Mr. Zuckerberg told investors. “But this is really important and this is our priority.”

CEO Mark Zuckerberg appearance before congressional hearings in late March marked the bottom for the stock, despite no shortage of negative headlines and some head-scratching attempts at clarifications of their data policies and their rules and guidelines regarding free speech on the platform. Referring to Zuckerberg’s lengthy interview from earlier in the week with Recode’s Kara Swisher, The New York Time’s Farhad Manjoo ripped the company’s ability to deal with these issues may end up being an existential threat to their brand:

In exchanges with reporters and lawmakers over the past week, its leaders — including Mark Zuckerberg, Facebook’s chief executive — have been comically tripped up by some of the most basic questions the site faces. Mr. Zuckerberg, in an interview with the journalist Kara Swisher that was published Wednesday, argued that Facebook would not ban Holocaust denialism on the site because “there are things that different people get wrong.” He later explained there were many other ways that Holocaust deniers could be penalized by Facebook — yet lucidity remained elusive.

Mr. Zuckerberg’s comments fit a larger pattern. Presented with straightforward queries about real-world harm caused by misinformation on their service, Facebook’s executives express their pain, ask for patience, proclaim their unwavering commitment to political neutrality and insist they are as surprised as anyone that they are even in the position of having to come up with speech rules for billions of people.

So I think it is important to recognize one simple fact, investors earlier this year panicked at the prospect that unquantifiable data scandals and a weak grip on the company’s guidelines for free speech might do irreparable harm in both advertisers and users of the platform’s eyes. causing a nearly 25% peak to trough decline in Feb-March. At this point, investors don’t have a care in the world. The stock is cheap on forward estimates, there has been no apparent financial backlash from advertisers, the company has already said spending will hurt profitability to combat these issues, and sentiment is white hot. What could go wrong?

To my eye, that $196-ish breakout level is worth targeting for a pullback in the event of guidance that disappoints. As you can see there is no overhead resistance, and the rally is getting just a tad steep.