Netflix (NFLX) will report their Q2 earnings tonight after the close. The options market is implying about an 8% move in either direction tomorrow, which is a tad rich to its 8.5% average one day move over the last four quarterly reports, but shy of its 10 year average of about 13%.

NFLX is up an eye-popping 106% year to date, after registering gains near 70% in 2017. Investors clearly think the company has reached an inflection point in their business model, with GAAP eps expected to more than double in 2018 (and probably again in 2019), as sales growth is expected to accelerate from 32% in 2017 to 38% this year, topping $15 billion.

In the last week there have been a few downgrades of the stock from Buy to Hold with analysts citing lofty expectations and cautioning against slower than expected domestic subscribers and the potential for the dollar’s strength of late to act as a headwind to already lower profitability for international subscribers where they are seeing most of their current growth (vs domestic).

Here is RBC Capital’s Mark Mahaney’s “Cheat Sheet” on what he is focused on into and out of the print. I would add that Mark has been a raging bull on NFLX for years, but the stock’s sharp run-up this year has caused him to be a tad delinquent on raising his price target, which is below the current stock price at $360, despite his Outperform (Buy) rating: 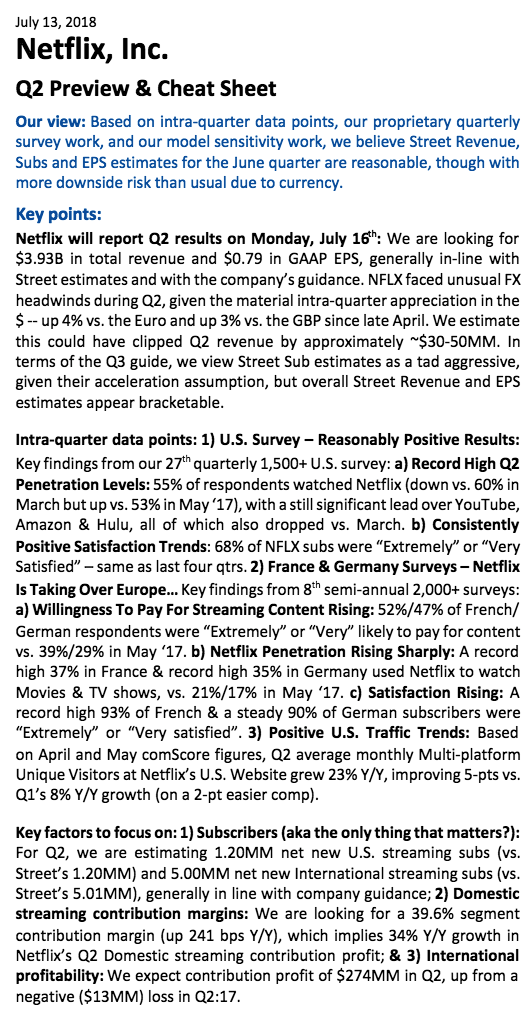 I have no strong feel for this stock one way or the other from a fundamental standpoint. They are executing on the plan that they have laid out, invest in original content, gain the bulk of their subscribers from here (last quarter was 125 million) from overseas. The fact that investors don’t care about valuation or negative free cash flow is their problem, not the companies’, or the stock’s, for now.

The technical levels seem fairly obvious, the only resistance at the prior all-time high near $424, while the early June breakout level to new highs, which also happens to intersect with the 2018 uptrend near $368 should serve as decent near-term support. What’s interesting is that both levels are nearly in-line with the implied one-day earnings move: 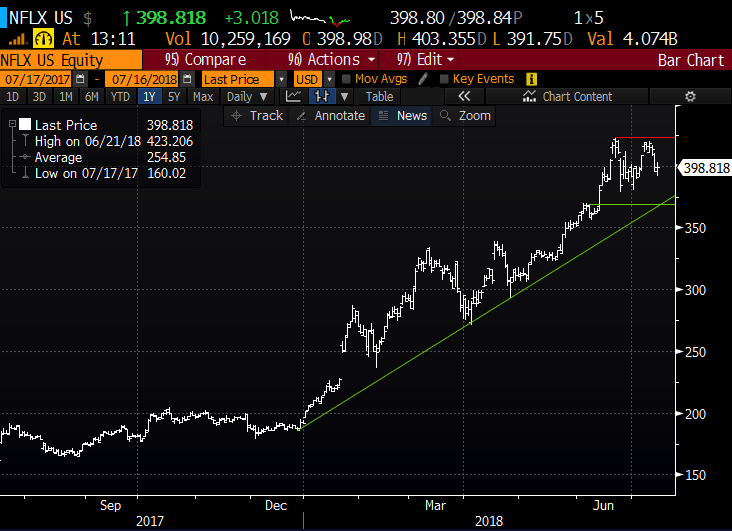 So what’s the trade? I’ll offer our normal disclaimer for long premium directional trades into events, it is a hard way to make a living trading option. You need to get a lot of things right to merely break-even, first and foremost direction, then magnitude of the earnings move and of course timing.

Rationale: This trade idea targets a 10% rally this week, and its worth noting that despite the stock being at all-time highs the last two quarters, the stock has rallied about 9.5% in each case. This obviously gets increasingly more difficult as the value of the stock increases, but this trade idea risks 3% of the stock price to possibly make up to 7% if the stock is up 10% by Friday’s close.

If I thought the company would disappoint on both Q2 results and guidance it makes sense to play for a retracement back towards the recent breakout near $350:

Rationale: this trade idea targets a move back towards technical support but also allows for profit potential significantly below said support while limiting risk to about 2.5% of the stock price.