My Fast Money friend Tim Seymor had the following to say on Twitter this morning about airline stocks: 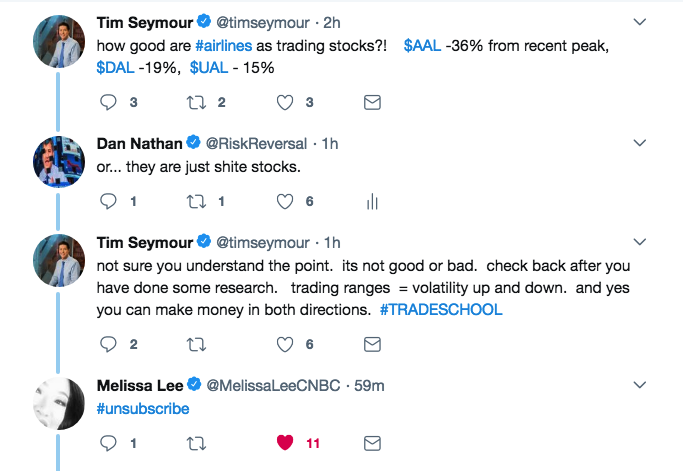 Obviously, Melissa Lee gets enough of us fighting on the show she doesn’t care to see it in her Twitter feed 😉

What’s clear from Tim’s comment is that American Airlines (AAL) show’s far worse relative strength to the broad market and its peers, today making new 52 week lows, down 30% on the year and down 38% from its 52-week highs made in January:

American is dragging down the whole group today after lowering guidance for TRASM, per FT.com:

Tomorrow before the open, Delta Airlines (DAL) will report their Q2 results. The options market is implying about a 4% move in either direction between now and Friday’s close, which is rich to the stock’s average 2.8% move over the last four quarters.

Shares of DAL as mentioned above have performed far better than AAL, but still poorly this year, down 11.5%, down 18.5% from its 52-week highs made in January. The DAL chart looks a lot more range-bound than AAL which looks to be in a free-fall. To my eye, DAL has near-term technical resistance between $54 and $56, and near-term technical support between $48 and $46:

With AAL’s news today, expectations for its peers have certainly been lowered which sets up for a sharp bounce back if DAL were able to beat and raise. An inline quarter and guidance is likely met with a muted response, while a meaningful guide lower is likely to see the stock testing the $46 support in the coming weeks.

If I were inclined to play for a bounce back towards $55 into tomorrow’s print I might consider the following defined risk trade idea:

If you think that the company will also offer weaker than expected guidance and its relative strength will be lost in the coming weeks then consider the following defined risk bearish trade idea:

Rationale: this trade idea offers a similar risk-reward to the bullish trade idea, risking 25% of the width of the spread which is attractive for those with a convicted directional view into an event like earnings.

But i’ll offer our normal disclaimer for long premium directional trade ideas into events like earnings, you need to get a lot of things right to avoid losing money, first and foremost direction, timing and magnitude of the move.