Shares of PEP have had a particularly volatile year, down about 9% ytd, down 11% from its 52-week and all-time highs made in late January, but also up 13% from its recent lows made in early May, which capped a 21% peak to trough decline. Technicians might view $110 as technical resistance dating back to last fall: 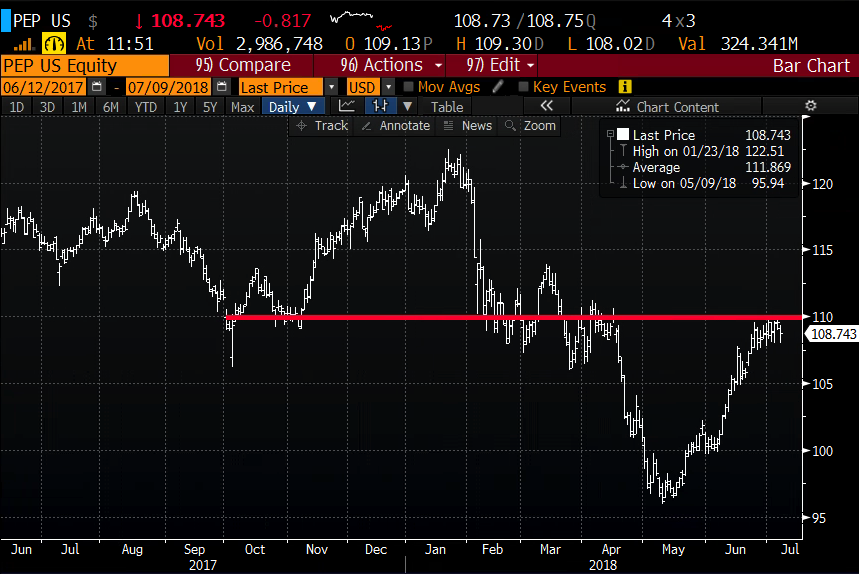 Why the volatility and poor performance since late January, massively underperforming the broad market (SPX up 4% ytd)?? Well, it likely has something to do with being one of the largest stocks in the consumer staple space which happens to be the worst performing sector in the S&P 500 (SPX) as investors have sold shares of low growth, high valuation companies with high dividend yields as bond yields have risen in 2018.  Also, PEP gets about half of their sales from outside the U.S. the dollar’s nearly 7% rise since its 52-week lows in February could cap eps upside, coupled with rising transportation costs.

While PEP’s stock has declined, its dividend yield has increased to 3.4%, up from under 3% at its highs, but so has its Price to Earnings ratio, now at about 19x 2018 expected eps and 18x expected 2019 eps with its PE topping out very near 24 at 10-year highs in January. 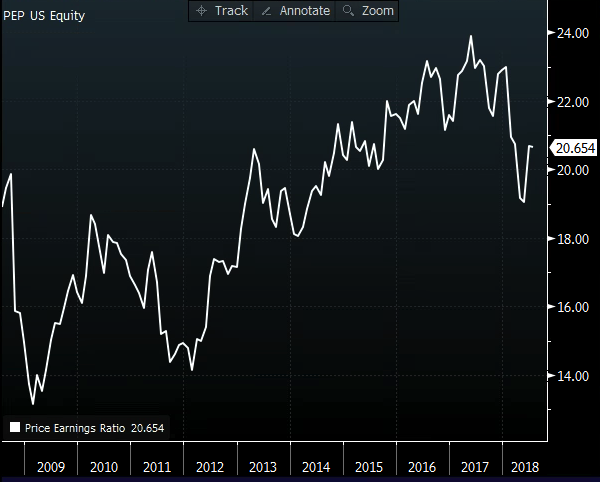 Estimates for PEP’s eps and sales growth have not changed much, high single-digit eps, and low single-digit sales, but PE has gone down and its dividend yield has gone up, possibly making the stock more attractive to investors. With the stock at very near the mid-point of a very volatile year, it would likely take a meaningful beat and raise to breakout out above $110 on earnings, and a miss for the stock to be headed back to retest the 52-week lows.

But when you have a 2% implied move into an event like earnings for a stock like PEP, that means that if you have a directional inclination, that to define your risk and pick a direction you are only risking 1% by buying the at the money put or call. Still, this is a low percentage way to make money as you need to get a lot of things right to just break-even, first and foremost direction, timing and magnitude of the move.

If I were inclined to play for a bounce above 110, I would look to take advantage of relatively cheap options prices and look past weekly options to give a little time to play out and not be so binary on the earnings event.

Rationale: this trade risks 1% of the stock price for a potential 2.6% potential payout if the stock is up more than 4% in the next two weeks.

If I thought fundamental headwinds might persist and the company would guidd down, I would look to play for a sustained sell-off over the course of the summer with the stock retesting the 52-week lows just above $95.

Rationale: this trade risks 1.5% of the stock price offering a potential 6% payout if the stock were to decline 9% over the next 8 weeks. Good risk reward, but need to be convicted and get direction right.