Nike (NKE) will report their fiscal Q4 results today after the close. The options market is implying about a 5% move in either direction which is in line with its 10-year average one-day post-earnings move, but I will add over the last four quarters the stock has had moves of basically flat and up 11%.

On Monday I highlighted the trade idea detailed by my Options Action cohort Mike Khouw (read here) that was playing for a near-term consolidation or a mild move lower post results. The trade idea was to sell a July call spread, here was my comment:

So from where I sit, this is a good trade structure for those who agree with Mike’s take on the stock into the earnings report. But I would add this is a matter of conviction. If you thought the stock was going to crater post results this might not be the trade structure to choose as it limits profit potential to just 40 cents. BUT and this is a massive BUT, it comes down to sizing, and when Mike and detail trade ideas on Options Action, we don’t presuppose that any two viewers have the same risk parameters or those similar to how we might trade a fundamental idea.

So here we are hours away from the results, with the stock about a dollar lower than when we discussed on Monday. To my eye, the stock is coming very close to important near-technical support at $70, which happens to be the breakout level to new highs after a multi-months long consolidation and the intersection of the uptrend from the 52-week lows: 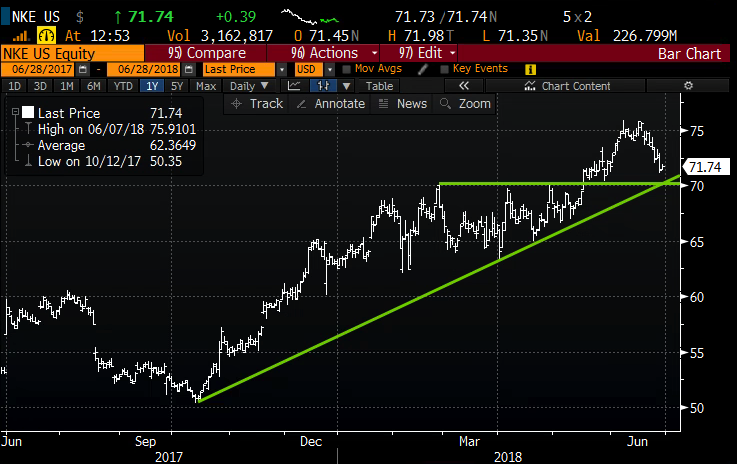 So Mike’s trade has a high probability of success, but limited potential reward. Now that is obviously a matter of sizing if you were very convicted than could just risk more, but if you wanted to risk a defined amount in premium terms, and have the potential to make a lot than there are other ways to do this with defined risk.

For instance, if you thought that if NKE was going to miss and guide down, and the stock breaking $70 would likely cause continued weakness in the days/weeks to come as we just witnessed in stocks like Starbucks (SBUX) and FedEx (FDX), then you might consider the following trade idea:

I highlight this trade idea because it is important to call it what it is, a bet with defined risk, as opposed to Mike’s idea that has a much higher probability of success.

if I were inclined to play for a bounce new highs tomorrow I would probability just look at the weekly calls. For instance:

Rationale: this trade idea risks 2% of the stock price to make a bet that the stock is up 7% a tad above the implied move, which the options market places at only an 11% probability of that happening. NOT a great risk-reward.

I highlight both of these trades and their probabilities of success or achieving max success to highlight just how difficult it is to make money with long premium directional strategies into events like earnings. You need to get a lot of things right to just make money, first and foremost direction, the magnitude of the move and timing.