Starbucks (SBUX) is down about 10% on the week following Wednesday night’s preannouncement calling for global same-store sales to come in well below the 2.9% expectation for the quarter at just 1%, citing weakness not just in the U.S. where they will be accelerating store closures due saturation, but also weakness in China, a key growth region.

CNBC’s Jim Cramer and David Faber layed into relatively new SBUX CEO Kevin Johnson Thursday morning as investors were digesting the news and considering the future of SBUX as it transitions from a founder-led company to one now led by a former technology executive who is looking to create shareholder value via leverage of technology investments:

I guess the most important takeaway for me is that, as Cramer highlighted since Johnson has been CEO they have missed major financial targets in three of the last four quarters, and the issues they are having with saturation in developed markets, higher expenses related to tech investments, and potentially not getting the payoff of opening a new store every fifteen minutes in China.

But here is the thing, maybe expectations have come down enough and the company will be set to see some of their tech initiatives kick in in the back half of the year. If you are inclined to play for continued consolidation and a bounce into the fall, it makes sense to consider call calendars, selling a short-dated out of the money call to help finance the purchase of a longer dated call. It makes sense to target the recent breakdown level in the mid $50s to serve as near-term resistance: 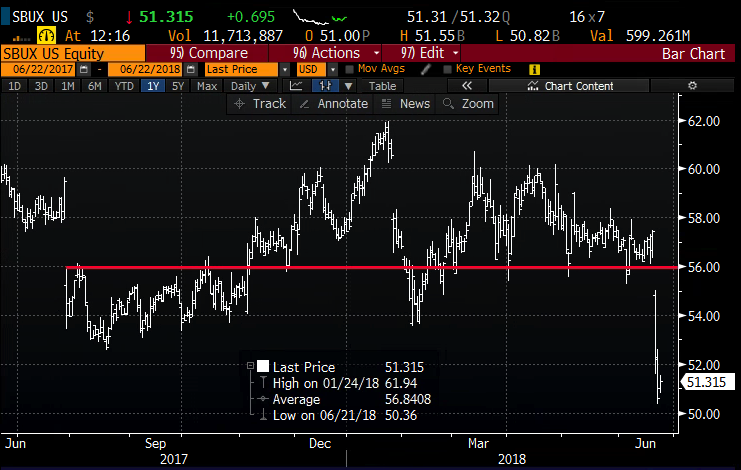 A quick look at the five-year chart and it becomes pretty apparent that $50 ish is major technical support and for those making a contrarian bullish bet it makes sense to define one’s risk to that downside level: 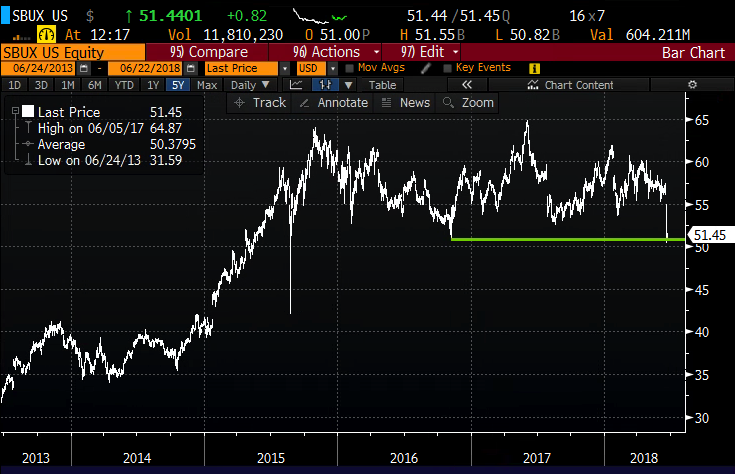 The ideal scenario is that the stock moves up gradually towards the 55 strike, the Aug expires worthless at or below 55, or can be covered for a loss or a gain. The point of selling Aug is to help offset the decay that the long Oct call will have over time despite what it gains or losses in deltas as the stock moves closer too or further from the strike.

At Aug expiration, depending on where the stock is, one could always book a profit or a loss (with 50 cents premium being the max risk), turn again into a calendar by selling a 55 call in sept or sell a higher strike call in Oct and turn into a vertical call spread further reducing the premium at risk.