Micron (MU) will report their fiscal Q3 results tonight after the close. The options market is implying about a 7.5% move between now and Friday’s close. With the stock at $59.50, the June 22nd weekly 59.50 straddle (the call premium + the put premium) is offered at $4.40, if you bought that and thus the implied move you would need a rally above $63.90, or a decline below $55.10 to make money. The stock has moved about 7% on average over the last four quarters, with two lower and higher. The stock has moved about 6.75% the day following earnings over the last ten years.

Shares of MU are up nearly 45% on the year already, up about 60% from its 2018 lows made in mid-February. The stock is very near the levels it was back in late March, prior to its fQ2 results that were better than expected, but for some reason was the start of a fairly epic six-week 25% decline in the stock from the 8% post-earnings gap to its recent lows in early May: 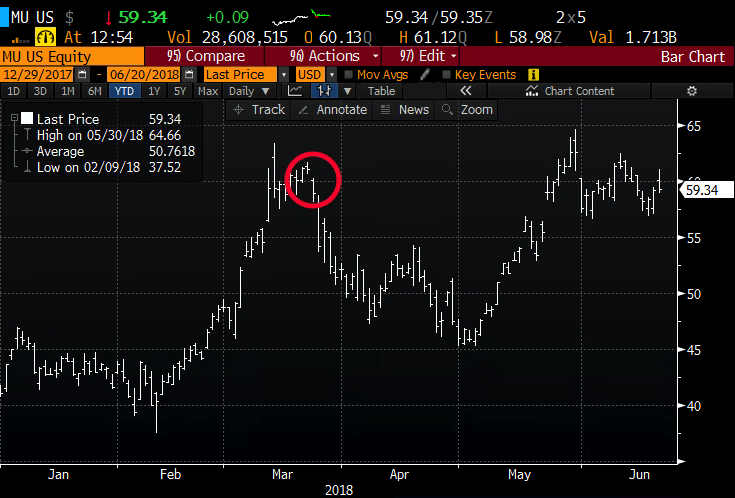 What’s interesting about the post-earnings move in March was that the results and commentary were solid, but maybe sentiment was just too bullish as there was no incremental buyer. The volatility in the stock so far this year has made this a sort of battleground stock between flash memory bulls and those who think the cycle is far closer to its end than the start of another leg. One of the best semi analysts, John Pitzer from Credit Suisse had some interesting commentary in a note to clients on Monday regarding where we are in the memory cycle, suggesting that we are Not in a downturn but we are in:

a period of DIGESTION in what is a STRUCTURALY improved Memory industry and NOT the beginning of a correction/downturn.

Frankly, I have no idea where we are in the cycle, but I would add that given the current market environment that I suspect the stock would react differently to a meaningful beat and raise this quarter than it did last quarter, likely breaking out to new all-time highs. That said any weakness in the quarter just ended and guidance weakening the bull case that at the very least calls for a “digestion” phase and the stock is headed down 10%.

Bullish trade idea... If I were inclined to play for a beat and raise and a move to new highs I might consider the following trade idea:

Rationale: while this is a very binary trade, get the direction wrong and likely lose the entire premium, this trade idea offers near the money participation targeting amove back to the prior all-time highs post results.

Bearish Trade Idea… if you think the company’s guidance causes the sort of rout we saw post results in March into April….

Rationale: this is not a fabulous risk-reward, but long premium directional trades are tough given how pumped the implied move is into earnings.

Profits of the stock up to 62.50, called away above 62.50 but can always cover short call to keep long stock position intact.

Losses of the stock down to 57, protected below that.

Rationale: this trade makes sense for those who want to stay long stock, willing to give up some upside for defined risk to the downside.