After more than 100 years, General Electric (GE) is being kicked out of the Dow Jones Industrial Average, the last of the original members when the index was formed just before 1900. Shares of GE are down 26% on the year, today hovering above its 52-week lows made in late March: 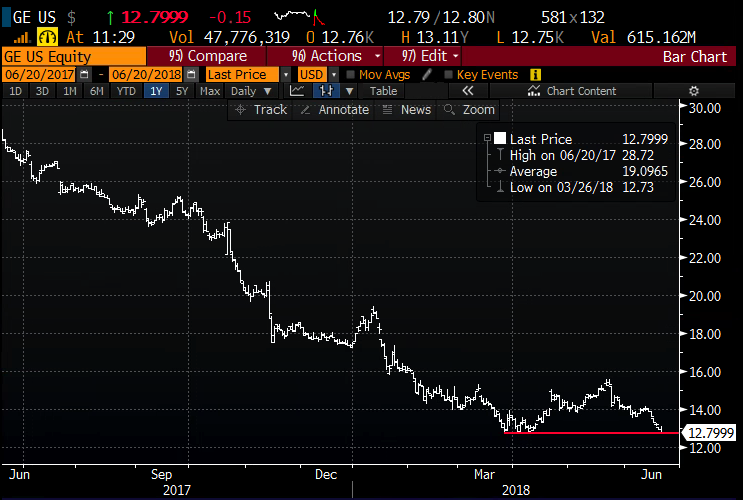 To state the obvious, investor sentiment is poor. Wall Street analysts have not been this negative on the stock since the financial crisis, as there are only 6 Buy ratings, 11 Holds and 4 Sells.  A breakdown below the March lows and there is really no technical support until the financial crisis stabilization level near $10: 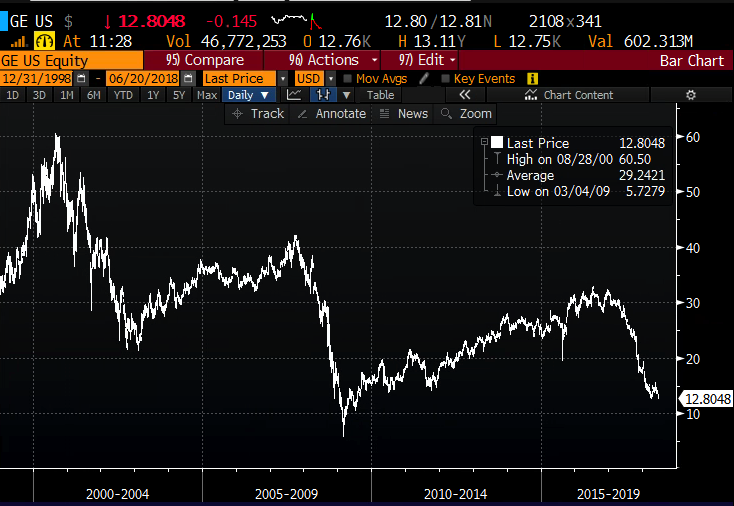 As it relates to sentiment, one of the largest trades yesterday in the options market appeared to be a bearish roll in GE puts in July when the stock was trading $12.95 shortly after the open, a trader sold to close 42,500 of the July 14 puts at $1.16 and bought to open 85,000 of the July 12.50 puts for 32 cents.  What struck me about this roll is that the company is scheduled to report Q2 earnings on the morning of Friday, July 20th, which happens to be July expiration on the close. I suspect this trade was a shareholder of the stock monetizing a hedge and using some of the profits to roll down some protection into a potentially volatile earnings event.

While these July 12.50 puts look dollar cheap (they are currently trading 38 cents with the stock down 10 cents from yesterday’s trading price) its important to consider implied movement on the event, about 4.5% and how much the stock has moved on average following earnings (about 2.85% over the last four quarters and about 3% over the last ten years). Now that is just the day following earnings, and the movement seems kind of muted for a stock that has lost 75% of its value since its pre-financial crisis highs, but many of the gaps have occurred following unexpected announcements like pre-announcements, or corporate actions like divestitures, restructuring, management changes or the company’s first dividend cut since the financial crisis which came last fall.

If you thought that there was going to be another dividend cut, or a pre-announcement over the next few weeks, and you were interested in protecting a long position then these July 12.50 puts would likely be perceived as dollar cheap at just 3% of the stock price. But I will also highlight and important fact that hedging a long stock position too frequently can be a massive drag on performance over time.