No matter what the Trump Administration is calling their trade skirmish with China, it is quickly escalating to what most economists might call a War. Much like most policies of this White House, they are not well thought out. I think there is little doubt that there needs to be a reset on trade relations with China, specifically as it relates to intellectual property transfer, but the President’s obsession with trade deficits seems to be setting the stage for a conflict that might take the air out of some of the near-term benefits to the economy from last year’s tax cut.

Today the New York Times asked today Trade Skirmish or War? Who Gets Hurt? which is worth a read… despite few clear answers. I suspect Trump has little incentive to get into an all-out trade war with China, especially as they may hold the keys to any nuclear deal with North Korea, something the president will need to secure without looking like a total fool after this past week’s farce of a summit.

But here is the thing, I suspect that China has a lot more to lose in the near term from an economic standpoint than we do given the trajectory of our economic health vs theirs… Taking a quick look at China’s Shanghai Composite and you see that today it closed at new 52-week low, which is down nearly 16% from its 2018 highs, and nearly 9% on the year: 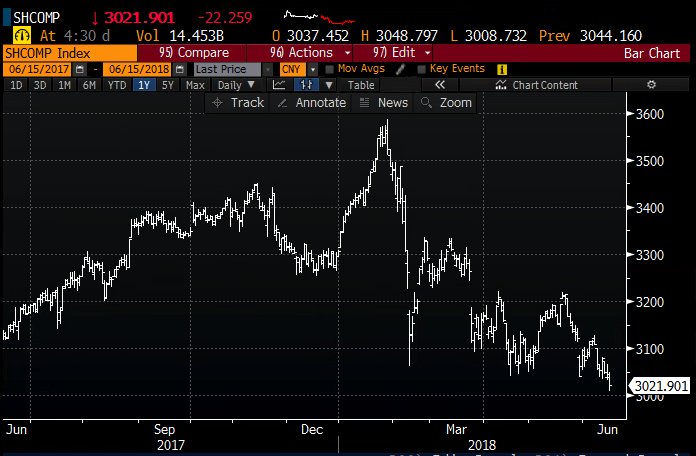 Taking a look back ten years and it appears that the 3000 -3500 range is kind of an interesting support-resistance level, most definitely though over the last few years: 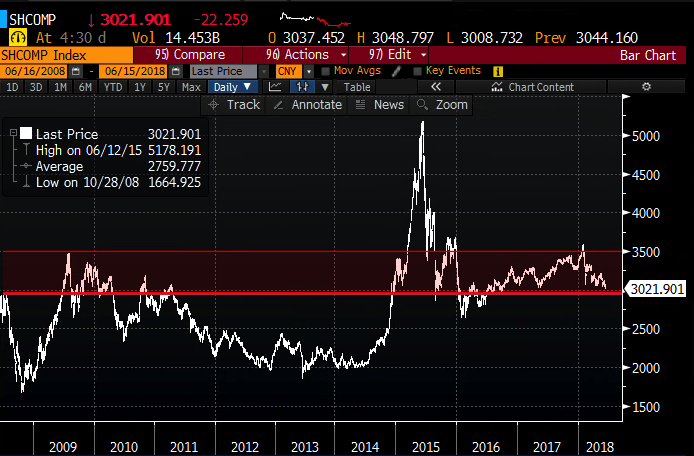 Taking a look at the FXI, the iShares Large Cap China etf, made up largely of SOEs, state-owned enterprises (aside from Tencent) and you see the stocks of a group of companies that might adversely be affected by an economic slowdown resulting from a trade war with the U.S:

The $46 support level looks very much like 3000 in Shanghai Comp, with it bouncing today. 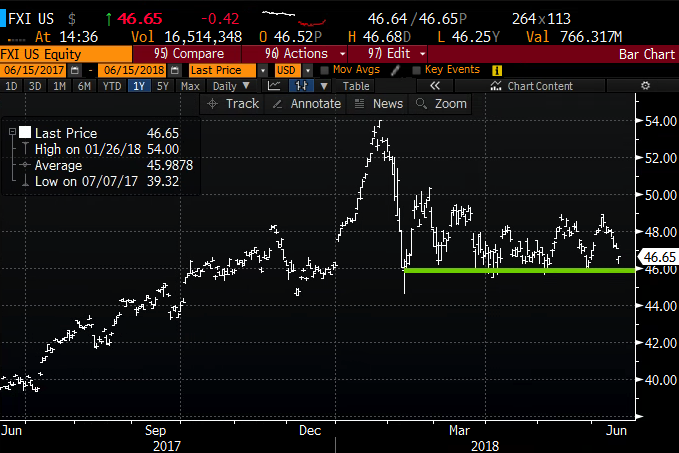 Short-dated options prices in the FXI look fairly reasonable with 30 day at the money implied volatility at 17%, nearly in half from its 2018 highs and not far from where options prices spent most of 2017. For those considering expressing directional views, long premium strategies might make sense with vol here: 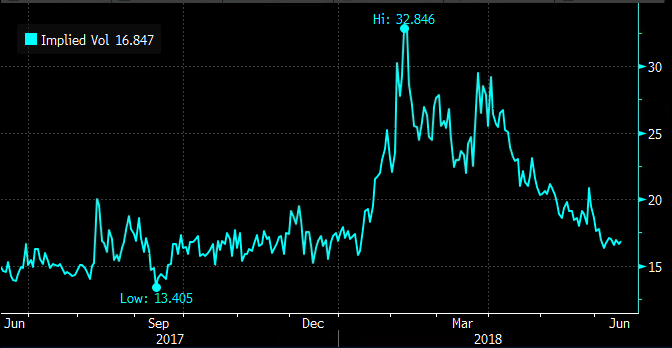 So what’s the trade? From where I sit, I suspect this tit for tat to rachet up this summer between the U.S. and China and I expect this to weigh on the near-term outlook for China’s economy and might be reflected in risk asset prices, most notably stocks…

Rationale… this trade idea is already 20 cents in the money, and has a breakeven down 2.2% from the trading level. Risking 1 to make 2 seems like a pretty fair risk-reward given how close the breakeven is.