Adobe Systems (ADBE) reports their fiscal Q2 results tonight after the close. The options market is implying about a $10, or about 4% move in either direction tomorrow. On average over the last four quarters, the stock has moved only about 2.5% the day following results, yet the average one-day post-earnings move over the last ten years has been about 5%.

Wall Street analysts are fairly mixed on the stock with 18 Buy ratings, 11 Holds, no Sells but an average 12-month price target of $252, below where the stock is trading, I guess that can happen when you have a stock that has nearly doubled in a year.

For comparison sake, Salesforce.com (CRM) is also trading today at a new all-time high, is also massively outperforming the broad market, up 36% ytd, also has expected sales growth of 20% this fiscal year but trades at just below 8x sales, sporting a $103 billion market cap. The differential might be the profitability on those sales with CRM having gross margins of 77% vs ADBE at 87%. Still seems like a fairly healthy spread in my opinion given how high both of their margins are. Two years ago, prior to both stocks doubling, both were considered targets of larger software companies looking to expand offerings of software as a service… obviously there were no bids for either, but now these two are too large to be acquired with what has to be a fat premium and will likely both be forced to make large acquisitions as their own growth rates decelerate to buy faster-growing companies to justify their valuations.

From purely a technical level, the stock has no overhead resistance, despite being a little extended in the near term, with fairly obvious near-term support at the recent breakout to new highs at $235 in early May, which also happens to be the intersection of the uptrend from the massive earnings gap last October: 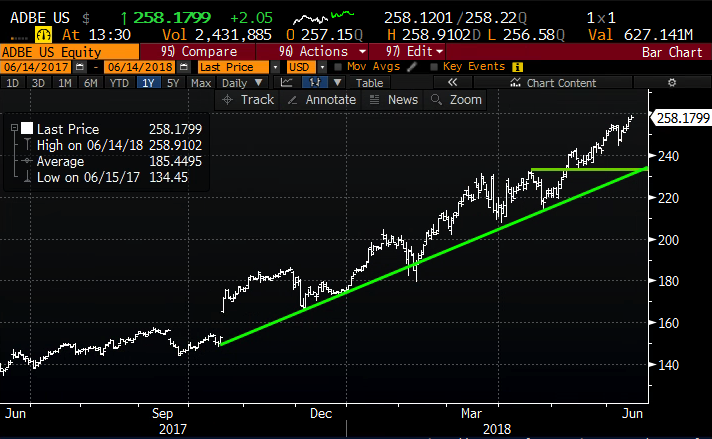 While the implied move is greater than the recent average, it’s important to remember for those with a convicted directional view, the at the money put or the call premium is only half the implied movement. For instance with the stock at $258. the June (tomorrow expiration) 257.50 call is offered at $5.20, and the June (tomorrow expiration) 257.50 put is offered at $4.80, both about 2% of the stock price. If you wanted to make a defined risk directional bet that the stock would move at least 2% tomorrow that’s probably the best way to do it, risking what you are willing to lose. I’ll offer our usual disclaimer… long premium directional bets are a very hard way to make money consistently as you need to get a lot of things right to just break-even; first and foremost direction, magnitude of the move and then of course timing.

For those long the stock who are looking to define their risk into the event for fear that a miss and guide down could have the stock back down towards support, one might consider owning that June 257.50 put that breaks even down at 252.70.

For those seeking direction, I would have said this at every new high in the stock for the last year, I don’t buy stocks up on spikes at new highs into events. This stock in particular has been a good trading vehicle on the long side when it has pulle3d back from highs and then makes another run for a breakout. The stock is priced for perfection here imo.