As you are aware of by now, a federal Judge has ruled in favor of AT&T’s (T) $85 billion takeover of content provider Time Warner (TWX), without conditions. The case brought by the government to block the deal has weighed on the shares of AT&T, and this morning the stock is getting little relief, down 5.3% on the heels of a downgrade to a Sell by influential telco/media analyst Craig Moffett of MoffettNathanson, citing deterioration in their legacy business and “dividend sustainability”: 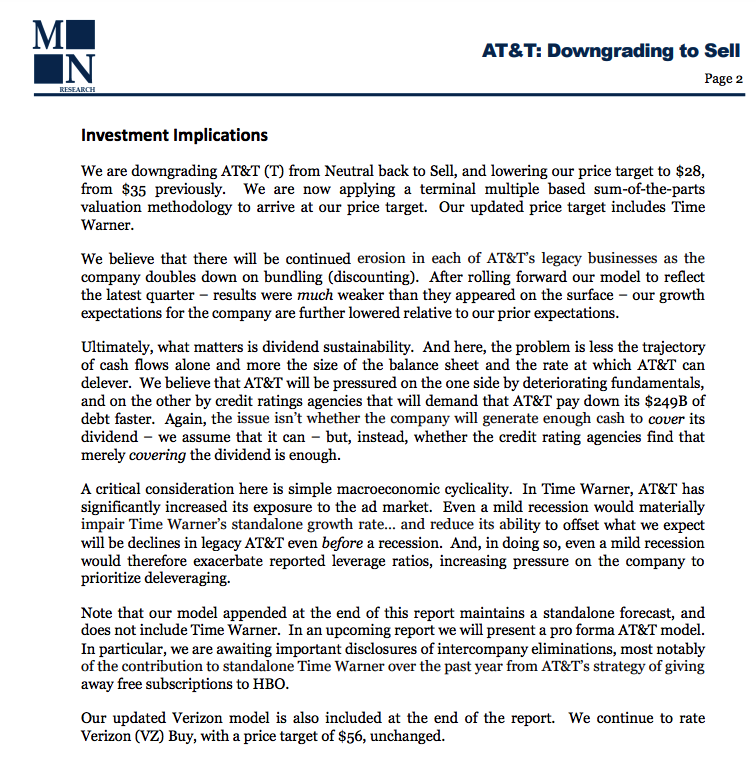 and last week a downgrade from Jeffries, per CNBC, citing the likelihood of increase content spending resulting from intense competition:

“We are downgrading the stock from Buy to Hold largely on concerns related to the entertainment segment as cord shaving and spin downs continue to pressure margins,” analyst John Janedis wrote in a note to clients.

“On the Time Warner front,” he added, “we assume the deal will get approved, which could benefit the stock in the short term. However, we also think there’s risk that programming investment at both HBO and Turner will need to move higher given increased over-the-top competition, which could cap upside to the $1.5 billion of expected cost synergies.”

“Given increased competition from Netflix, Hulu, Amazon, and OTT players, ratings for traditional players remain under pressure,” the analyst added. “For HBO, while still the leading linear premium cable player, we think programming inflation is undeniable. When we marry the combination of competition, ratings pressure, and programming cost inflation, we think there is the potential that T/TWX management will look to increase programming spend following a review of the TV landscape once the deal closes.”

All these concerns make perfect sense, and investors with any sense of history might find it interesting that investors with a memory might recall the last time Time Warner was involved in a mega-media-merger, it also corresponded as a top in the stock market after a long consecutive run of nice positive years of return, like now.

What’s interesting to me today about AT&T’s reaction is the fact that they set off what is certain to be a mad dash by its competitors in distribution, and now content to acquire and merge the remaining landscape. The possibilities of the combination are endless. But after some of the dust settles, and the T/TWX closes I suspect investors will come back to the OG of the new media landscape.

So what’s the trade? I think it makes sense to let things settle out a bit, but as the combined entity and new management start to articulate the strategy, cost savings, dividend guidance and synergies investors will come back to the story.

Rationale: this trade risks 3.5% of the stock price offering gains of up to 12% if the stock is up 16% between now and Oct expiration. The risk-reward given how much time to expiration looks attractive to me. Looking at the chart over the last few years it appears there is important support at $31 and healthy resistance at $38, defining one’s risk to just above support makes sense to me: 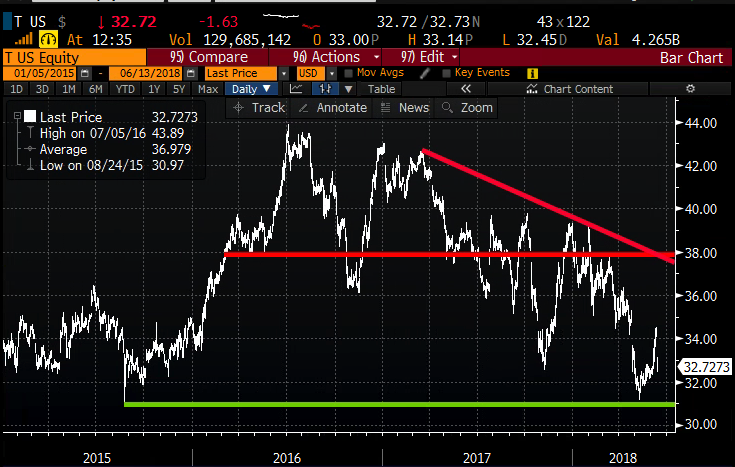