The S&P 500 Volatility Index (VIX) is set to close at its lowest level since late January, just prior to the S&P 500’s (SPX) all-time high, and down 75% from the fear gauge’s very brief spike to 50% in early February, despite being 25% above the multi-year lows made in early January: 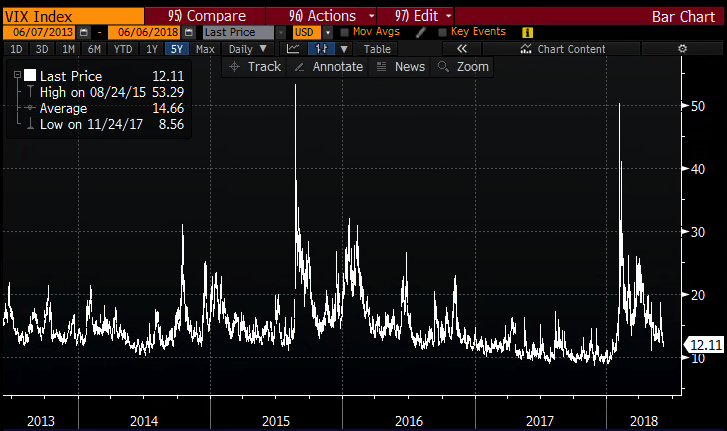 Charting the VIX is not a particularly useful endeavor trying to predict future price action in the equity index (SPX) which it tracks, clearly not on a near-term basis, and especially not in the sort of bull market we have been in since 2009 where interest rates have been incessantly suppressed around the ground in an effort to dampen volatility in risk assets and ultimately support prices.

But this tweet from my Fast Money friends got me thinking about the potential for multiple hawkish tones emanating from two of the most important central banks in the week to come:

Thirty-day at the money Implied volatility (blue line below, the price of options), in the SPX as you would expect is headed back to four-month lows, but still well above the January lows 6.5%, despite being below realized volatility (white line below, how much the index has been moving): 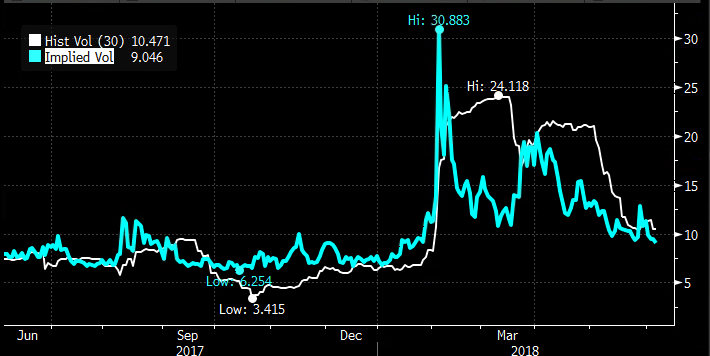 Taking a look at the one year chart of the SPX its quite obvious that late last month the index broke out of the downtrend that had been in place since the January highs, after finding support on numerous occasions at the uptrend from last summer: 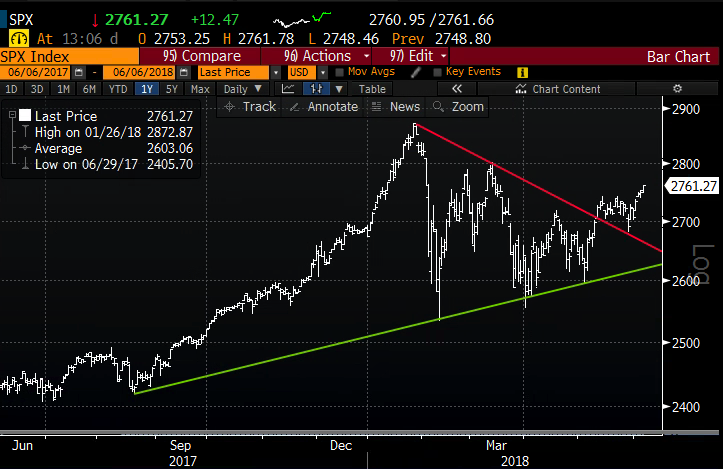 While this pattern looks fairly constructive, the SPX remains the under-performer on a relative basis to the tech-heavy Nasdaq and the small-cap Russell 2000 Index and while up 3% on the year, still down 4% from the January highs.

So news out of the G-7 early next week, the Fed on June 13th, the ECB on June 14th and the following week’s summit between us and North Korea might cause reason for a move back to the prior highs, or a retracement of the recent move back to the downtrend near 2660ish (or it might all cancel everything out).

Looking at the money options in the SPY (the etf that tracks the SPX) the Aug 17th 276 straddle (the call premium + the put premium) is offered at about $10, or about 3.5%, so if you were to buy the straddle and thus the implied movement, you would need a rally up to about 286, or a decline to about 266 to make money. What’s interesting about the implied movement is that on the upside it gets you back to the Jan highs and on the downside to the level that the index lifted off from following the tax cuts in late December: 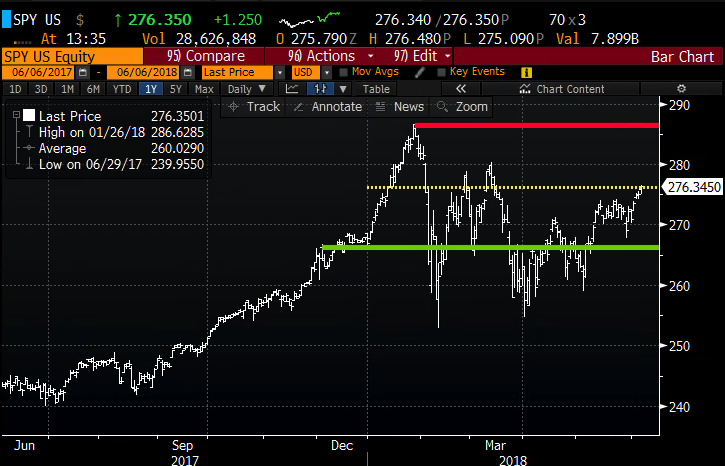 I guess my simple takeaway is this, if you are inclined to play for new highs in the SPY, catching up to the Nasdaq and the Russell then buying the SPY Aug 276 call for about $5, you are risking less than 2% to have very near the money exposure to the upside for almost two and half months. Obviously, the flipside is true to make a near the money bearish bet or a hedge against a portfolio that tracks the S&P 500.