On May 10th when shares of Facebook had filled in their late March gap from news of the Cambridge Analytica data breach I detailed a defined risk trade strategy to play for a move back towards the April lows prior to CEO Mark Zuckerberg’s Congressional testimony. At the time the stock was $185, and I targeted a breakdown level of about $180:

The stock has continued to rally, this morning trading within 1% of its all-time high made on Feb 1st just above $195. With the stock at $193.25, the put fly detailed above has lost nearly 50% of its value, worth $2.85 As regular readers know we like to use a 50% stop on long premium directional trades. At this point the Aug 180 puts have about a 25 delta, implying only about a 25% probability these puts are in the money on August expiration. At this point this is the wrong trade and the longer we sit with it the higher the probability that the trade will be a total loser on August expiration. At this point, it makes sense to close this position and if still bearish roll the view up a bit to ensure a higher probability of success.

The following day on May 11th when Facebook was $187, I laid out a similarly bearish trade in August on CNBC’s Options Action but simplified the trade structure using a put spread, watch here as it describes my rationale looking out to fiscal Q2 earnings in late July/early August which might show increased costs to comply with regulation which could weight on profitability and the possibility of lower user engagement which could affect advertising spending:

Here was the other trade idea from May 11:

With the stock at $193.25, this put spread is worth about $4.15, losing 35% of its value of a 3.5% move higher. This trade shows the sensitivity of near the money options on short-term movement. With our mental 50% stop in mind we are keeping this trade idea on a very short leash, but I would probably roll this one up to the trade idea below.

So what to do now? First and foremost, I got the near term direction wrong. Am I likely to get it wrong again if I double down? Maybe, my crystal ball is in the shop. What we try to do here is offer defined risk ways to play potential volatile events. Aside from investors disinterest in the potential implications of regulation and potential eps hits from the company dealing with this crisis, I feel more emboldened given the news from the NYT that the company was not exactly honest about other companies that have access to your Facebook data and that of your friends.

As for the Put Fly, I would roll this trade up, play for a double top and target $170: 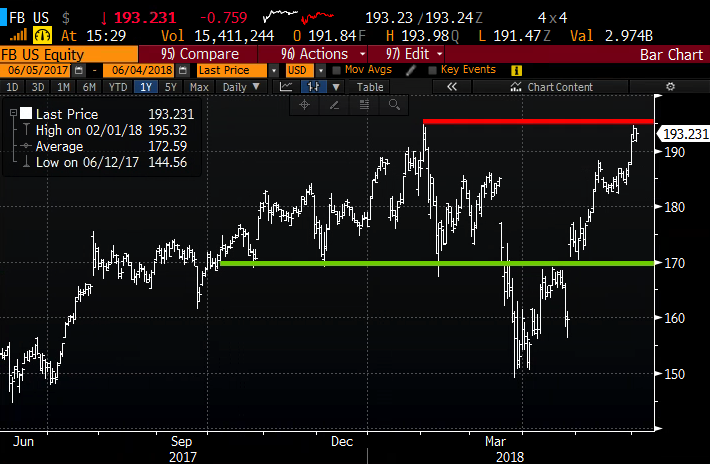 So what’s the new trade?