On Monday Apple (AAPL) will hold their annual World Wide Developers Conference with a Keynote by CEO Tim Cook at 1pm est. Under the Steve Jobs regime, prior to his passing in 2011, investors came to expect some big product announcements, usually related to iPhone at WWDC, but since Cook has taken the helm or at least over the last few years the focus has been generally related to their Mac & iPhone operating systems, as the event was originally intended, for software developers. While Jobs presided over an expanding hardware ecosystem beyond Mac buoyed by iTunes, I think it is safe to say that Cook has been a steward of that existing hardware ecosystem, while expanding beyond MacOS & IOS to now WatchOS & TVOS while also increasing services offerings.

A quick rundown of the Apple blogs and you get a strong sense that the focus will be on software and services, not the sort of things that tend to move the stock. Discussions of how they intend to integrate AR and AI into their existing platforms will be welcomed as consumers and reviewers have been generally unimpressed with the speed of the integration of these technologies despite the company’s repeated declarations that they will transform Apple users’ experience in the years to come.

The sell-off in the stock in April prior to the company’s fiscal Q2 results, and its subsequent rally in May to new all-time highs demonstrated that investors still care only about one thing, and that is iPhone unit sales. The multi-week consolidation above the prior highs is nothing short of impressive especially when you consider the relative outperformance of the stock up 10.5% ytd vs the S&P 500 up 1% and the Nasdaq up 8%. 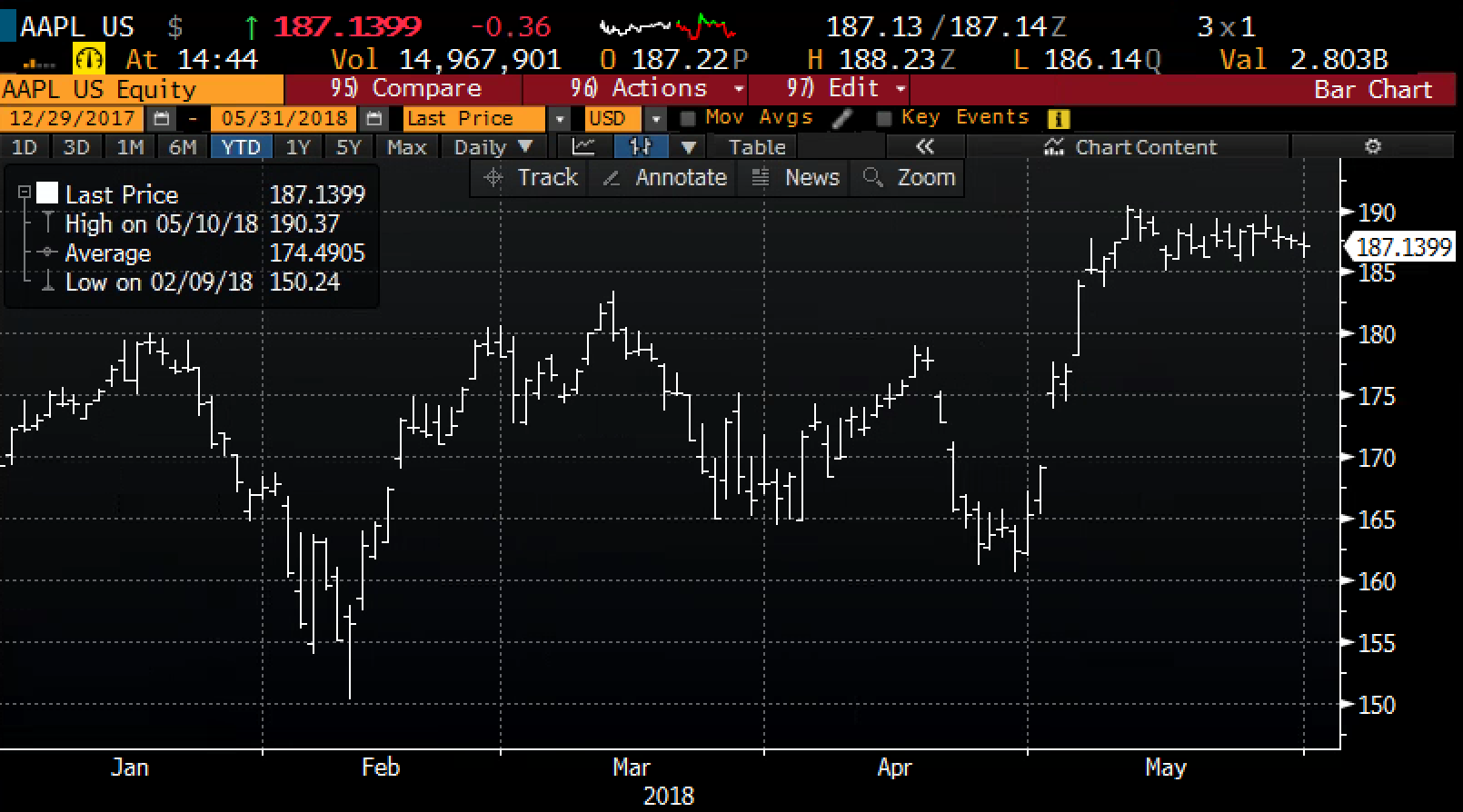 While expectations for new product announcements at WWDC appear muted, investors are likely to quickly shift their focus to FQ3 results in late July early Aug with guidance that will hopefully give some visibility into the iPhone cycle as the company is rumored to be offering some new sizes, possibly all with oled screens.

The options market is only implying about a $4 move (about 2%) in either direction between now and next Friday’s close, which seems fairly muted and speaks to what is likely to be uneventful on the news front on products that traditionally move the stock.

So what’s the trade? if you thought the stock was likely to remain range bound after WWDC, but you are interested in setting up for a breakout as we get closer to Q3 earnings and ultimately the early September announcement of new iPhones, consider call calendars, selling short-dated near the money calls to help finance longer-dated slightly out of the money calls:

The max risk of this trade is the $6 in premium paid, or about 3% of the stock price. The ideal scenario is the stock remains near the 190 strike between now and June expiration, and the short calls lose most of their value offsetting any decay in the Sept long calls. On June 15th expiration depending where the stock is you could again turn the position into a calendar by selling a July 190 call, or possibly a higher strike in July creating a diagonal, or turn into a vertical by selling an out of the money call in Sept and further reducing you premium at risk. Lots of options on this idea if the stock remains rangebound. The worst case scenario is that the stock craters from here and the long Sept calls lose considerable value and you are left holding a way out of the money call.

Rationale: Considering the weekly implied movement is about 2%, risking 3% on this trade that gives you lots of optionality covering a major catalyst in July and in Sept this trade looks dollar cheap.