Salesforce.com (CRM) is scheduled to report their fiscal Q1 results tonight after the close. The options market is implying about a 4.75% move in either direction or about $6, which is very rich to the 1.25% average over the last four quarters, but shy of its ten-year average one-day post-earnings move of about 6.5%.

Shares of CRM has been trading very near its 52-week and all-time high made earlier in the month for the last couple weeks, placing the stock up nearly 24% on the year, 3x the year to date performance of the Nasdaq Composite.

Sentiment towards the stock, like its chart, is pushing hard at the upper right. CRM has Wall Street analysts tripping over one another to top bullish estimates, despite rich valuation, with 37 Buy ratings, only 4 Holds and No Sells with an average 12-month price target of about $140, more than 10% above where the stock is currently trading. Short interest is below 3% of the float.

Oh and about the chart, the stock’s 80% gains since the start of 2017 have been fairly orderly, holding the near 45% degree uptrend, and only off of the February lows seeing an intense steepening, which has since resulted in choppy trading, despite trading within a few percent of the prior all-time highs.. To my eye there are a couple lines to focus on into earnings that could yield some volatility. First, the only overhead technical resistance is the $130-ish area, while the Feb breakout level to new highs around $115 should serve as very healthy technical support, which also happens to be the intersection of the uptrend from the start of 2017: 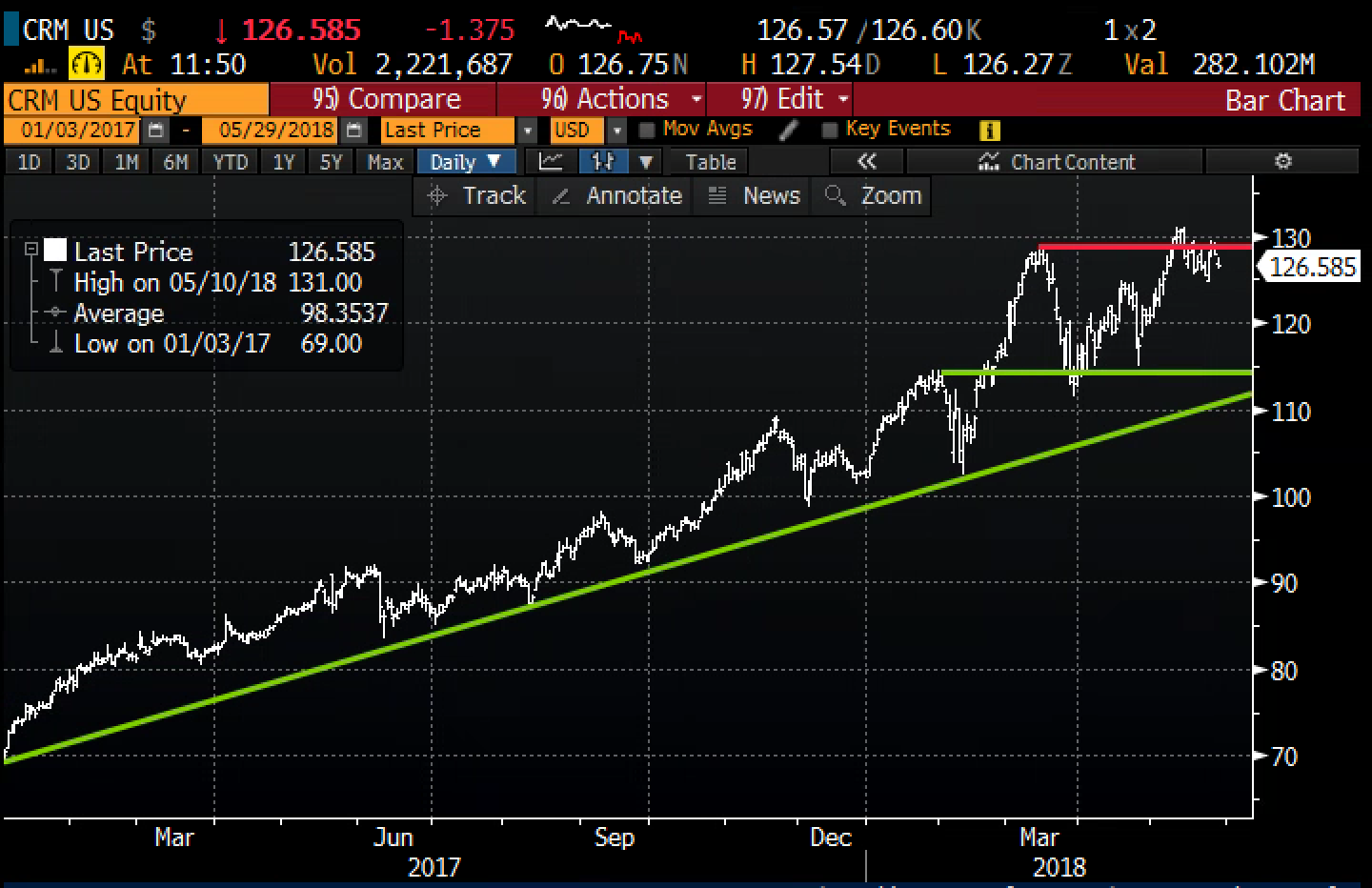 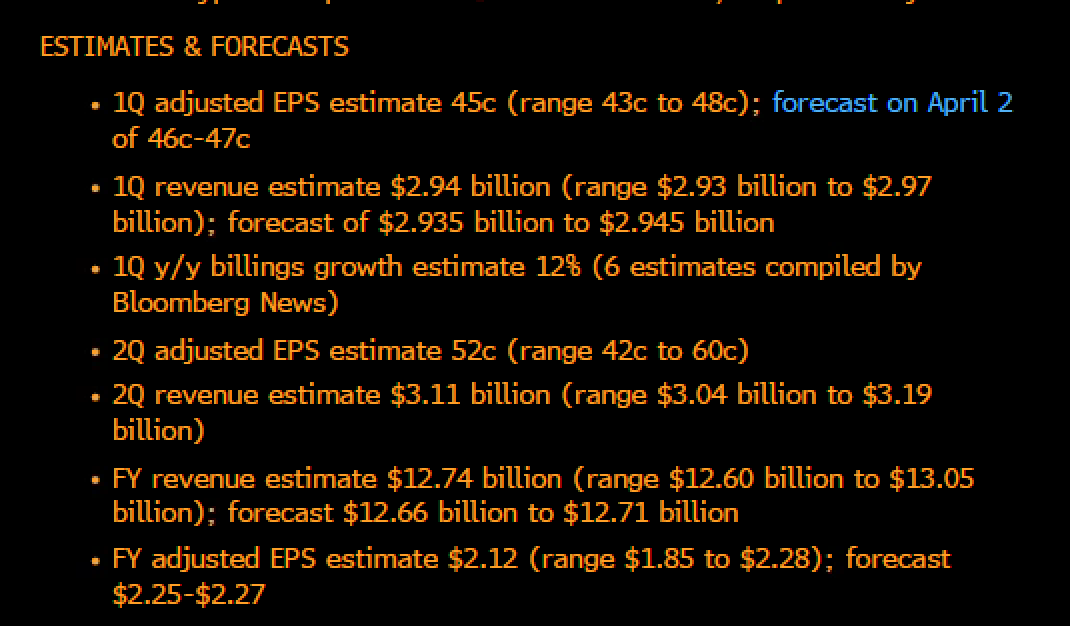 Credit Suisse who rates the stock a Buy with a 12-month target of $150 had the following to say previewing tonight’s print:

We believe CRM will at least achieve their Q1 (April qtr) sales goals following checks with several, large CRM implementation partners who all commented that their business was modestly or solidly above plan in Q1 by routinely displacing ORCL and SAP applications. The channel was also positive on the recently closed $6.5B MULE acquisition, which was expensive at 15.8x 2018 EV/Rev, but we believe provides many longer term growth opportunities, including: (1) launch of the Integration Cloud; and (2) allowing CRM to expand into new or adjacent apps & infrastructure clouds over the next 3-5 yrs which could further grow its 2021 TAM of ~$133B

Credit Suisse spent some time addressing the opportunities that CRM’s most recent acquisition offers the company to push into new markets for their cloud-based offerings:

the Anypoint Platform can be deployed both in the cloud and on-premise it aids in unlocking data in legacy systems, allowing CRM to truly digitally transform customers to a hybrid environment and then to fully cloud, eventually.

Another less understood benefit from MULE is that it potentially reduces friction integrating future (acquired) software clouds. Specifically, Salesforce could now more easily enter the ERP and HCM markets (Gartner sizes the Financials apps mkt at $16.1B and the HCM mkt at $15.4B by 2021, an additional $30B TAM), which would make it even more competitive against traditional legacy vendors such as Oracle

If I were Bullish on the stock, I might consider two trades, depending on conviction level:

Trade Idea #1 – Weekly Call Spread: If I thought the company would issue and beat and raise and the stock would rally inline with the implied move I might consider:

Rationale: this trade idea risks about 1.5% of the stock price to make a defined risk bet that the stock will be up more than 2% this week following results.

I’ll offer my normal disclaimer for long premium defied risk trades into earnings, you need to get a lot of things right to just break-even, direction, the magnitude of the move and timing.

This trade idea is binary, get the direction wrong this week and a total loser.

OR Trade Idea #2, if you thought a beat and raise might be in the stock given its recent bounce and wanted to play for a consolation this week post results I might consider the following call calendar:

The max risk of this trade is the $3.50 in premium paid, or about 2.5% of the stock price. The ideal scenario is the stock rallies a few percent near the strike and the weekly calls lose most of their value while the Aug gain in deltas. At which point if you wanted to play for a breakout over the summer you could sell a higher strike call in Aug and create a vertical call calendar further reducing your premium ar risk

Bearish… Trade Idea #3. If you thought the company would come up short of expectations and offer guidance below expectations:

Rationale: if they were to disappoint I suspect over the next couple weeks the stock would test technical support down near that uptrend. The 10% out of the money put at 1% of the stock price that expires in 7 weeks looks like an attractive sale vs long premium near the money. The risk – reward of 2.75 to 7.25 is not exactly 3 to 1 but close enought for government work.