Yesterday I had some commentary about Micron’s (MU) earnings disclosures back in March, their announcements on Monday at their annual analyst day and the stock’s reaction to the news over the last couple months (read here). Well in summary MU management showed a good bit of discipline offering conservative guidance on their earnings call with the stock near 18-year highs when the market was on shaky footing and what I would say the proper amount of savvy this week with the stock looking to complete a rebound from a near 30% peak to trough decline from its March highs.

On this note it is worth highlight the fact that PayPal (PYPL) will be holding their annual analyst day tomorrow morning at 8:30 am pst time in San Francisco. Often times major announcements will be made in the form of a press release prior to the event so that the information can be widely disseminated prior to the market open or after the market close to avoid volatile movements during market hours. The prior discussion about MU does not lead me to assume that PYPL will also raise guidance or add to their existing share buyback. In April 2017 the company initiated a $5 billion share repurchase and have been aggressively buying back stock despite the stock’s very strong performance. In their fiscal Q1 reported in late April the company reported that they bought back $1.8 billion in stock in the quarter in the low $70s, and a billion dollars worth in 2017. If they were to keep this pace the buyback will not likely be exhausted until later this year.

On the guidance front do they have room to raise, possibly as investors saw their net income guidance disappointing when they reported April 25th, per WSJ:

For 2018, PayPal told investors to expect more revenue but less net income than it had previously offered as guidance. Full-year revenue is now expected to be as much as $15.4 billion, up $150 million from its previous outlook, while per-share earnings are now projected at as much as $1.76, down from a previous maximum of $1.86.

And on the strategic front, PYPL announced their largest acquisition to date last week, in a move that gives them a greater push into small businesses, per WSJ:

PayPal Holdings Inc. has agreed to buy European financial-technology startup iZettle AB for about $2.2 billion, a move that would catapult the U.S. digital-payments giant into hundreds of thousands of brick-and-mortar retailers around the world.

Management will have a lot to talk about, but there might not be too many surprises like was the case with MU. Shares of PYPL have rallied $10 or about 15% from their 2018 low made earlier in the month, and investors might already be anticipating some good news.

The one year chart below shows the stocks rangebound action for most of 2018 between $70 and $85 and its recent push to match its prior highs: 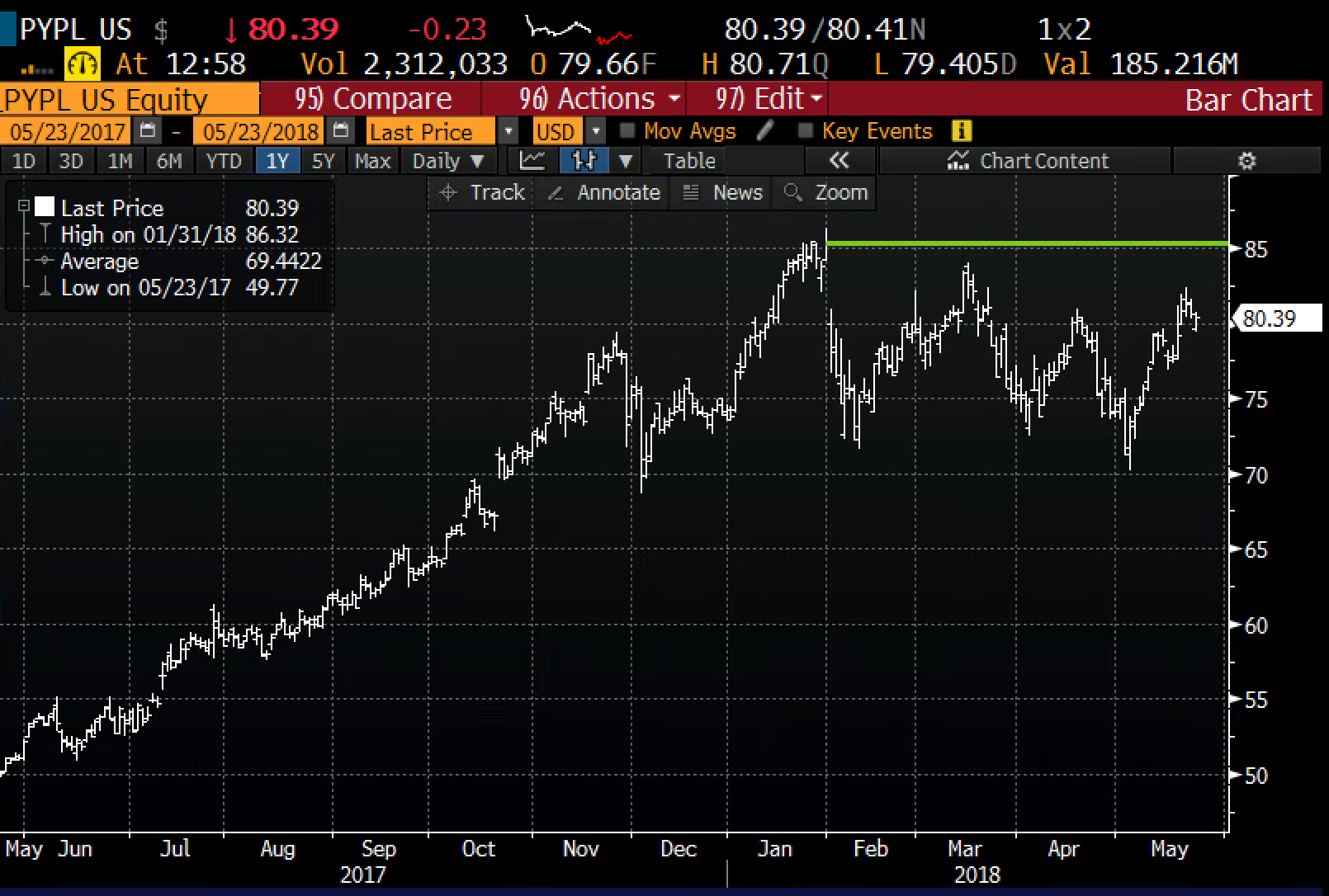 If the management fails to deliver like MU did, but does not offer and disappointing news then I suspect the stock settles in somewhere in the mid to high $70s.

If management has something up their sleeve and offers better than expected guidance and raises their share repurchase then the stock is likely back near the prior highs.

There is also the potential for a mixed bag, especially as much of their focus might be on their iZettle acquisition which will be very hard to quantify what it will mean for their business anytime soon.

The options market is implying nearly a 3% move between now and this Friday’s close. The May 25th weekly 80.50 straddle (vs 80.45 stock) is offered at $2.30, if you thought the stock could be volatile one way or the other after the event and you bought the implied movement (i.e. the straddle) then you would need a rally above $82,80 or a decline below $78.20 to make money.

If you were inclined to play for a move in line with the implied move to the upside then you might consider a call calendar, selling the May 25th 82.50 call at 40 cents and buying the July 82.50 call for 2.40. This call calendar would cost $2, which would be the max risk, The ideal scenario is that the stock would rally to the strike by Friday and the short May 25th 82.50 call would expire worthless and you would own the July 82.50 call for $2, which will pick up maybe $1 in deltas. I am looking at July as the long expirey because July should catch the next earnings event which could serve as the next catalyst. On Friday if you were inclined to stay long July then you could buy to close the May short strike and sell a higher strike call in July making a vertical call calendar further reducing the premium at risk.

For those who might be looking down, a put calendar targeting 78 would work the same way.