Hewlett Packard Enterprises (HPE) will report their Q2 results tomorrow after the close. The options market is implying about a 5.5% one day move following results, which is shy of its 6.5% average over the last four quarters but above the 4.5% average since its breakup from HPQ back in 2015.

The day following their Q1 results on February 23rd the stock rocked 10.5% to a new all-time high on better than expected results after a string of four earnings gaps lower in 2017. Despite the stock’s 10% pullback from its early March highs, the stock is up 21% on the year and has found a bit of technical support after filling in the Q1 earnings gap: 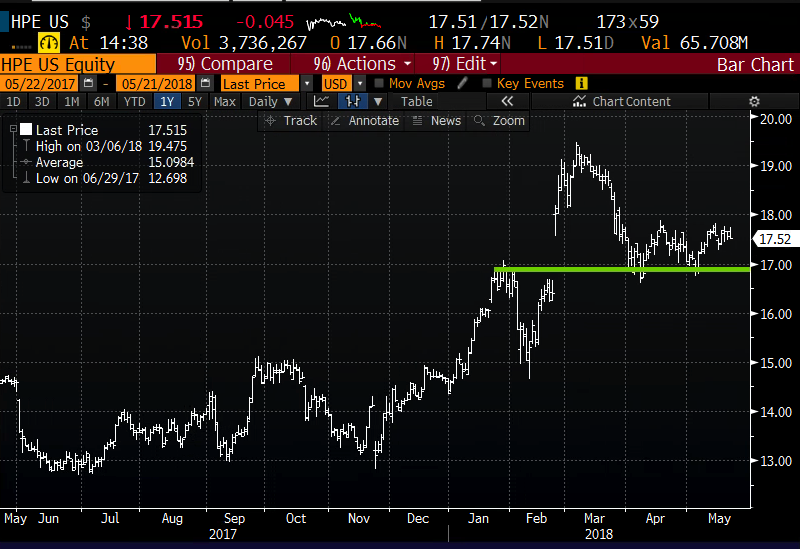 The cause for the Q1 earnings gap… a fairly impressive beat and raise, per BarronsOnline:

Revenue in the three months ended in January rose 11%, year over year, to $7.7 billion, yielding EPS of 34 cents, excluding some costs.

Analysts had been modeling $7.07 billion and 22 cents.

For the current quarter, the company sees EPS of 29 cents to 33 cents, above the average analyst estimate of 26 cents per share.

A 9% revenue beat and a 50% eps beat in the quarter., while raising current quarter eps by 5 cents or 20% above expectations and the full year eps up 19%, which basically incorporates the beat and raise. Given the results from IBM and CSCO of late, I would be very surprised if HPE has a beat and raise to anywhere near the magnitude of the one in February.

If I had a directional inclination and wished to play for a move in line with the implied move and define my risk I would likely just use a $1 wide at the money call or put spread.

Break-Even on May 25th expiration:

Break-Even on May 25th expiration:

The rationale for both: These trade ideas give very near the money participation at just 2% from the stock price and allows for potential gains of up 2x the premium at risk. While this is not generally a great risk-reward, into a potentially volatile earnings event this offers a defined risk way to play for this with a conviction on the direction of the post-earnings reaction.