Last summer in early August when the U.S. Dollar (DXY) was trading at two-year lows we considered the implications for emerging market equities and debt: 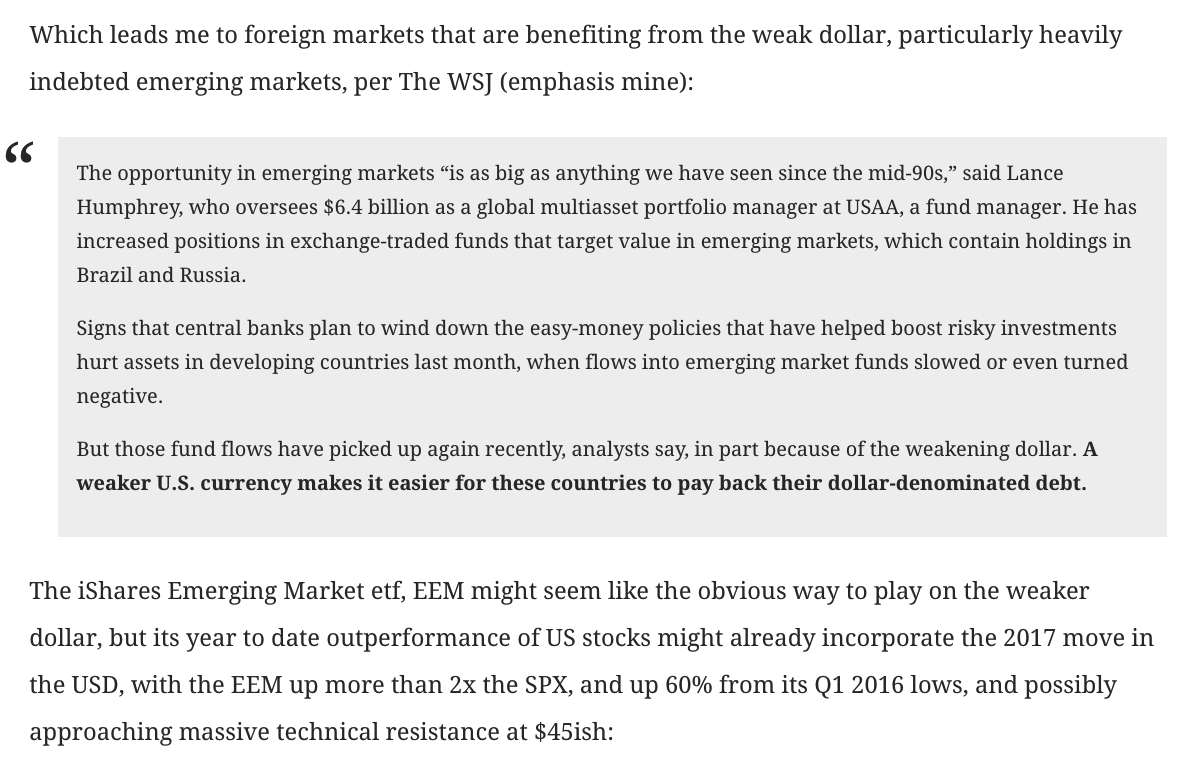 Well I was a little early on the short EEM trade as the DXY went lower and the EEM did in fact breakout to new multi-year highs… but as the one year chart below of the two overlayed against one another might suggest the opposite is about to happen, especially as we have seen the U.S. 10 year Treasury make a series of closes this week above the psychologically important 3% level: 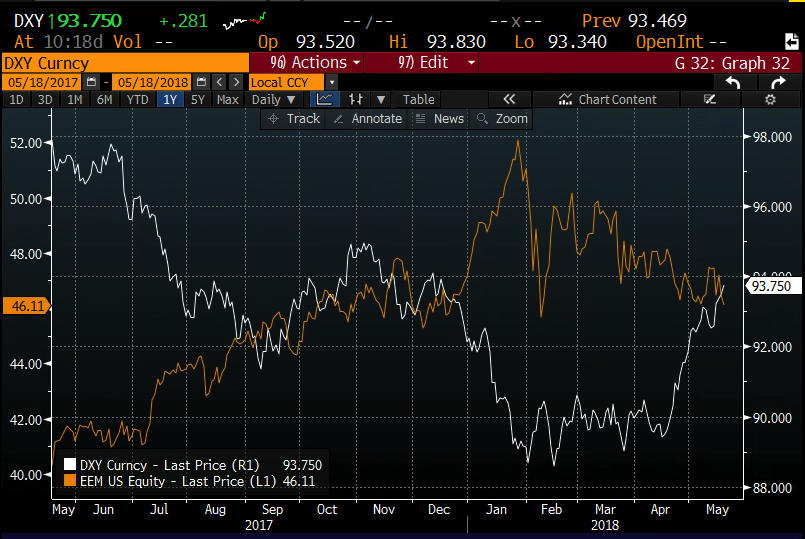 Earlier in the week, the WSJ readdressed what rising U.S. rates meaning for emerging markets, without too much concern for the companies that make up a disproportionate amount of the weight of the EEM:

The fear of contagion is stalking emerging markets again, but Argentina and Turkey have put themselves in the firing line while others have distanced themselves from it.

The shakeout in emerging markets sparked by the “taper tantrum” of 2013 put the spotlight on countries with relatively wide current-account deficits. The turmoil that has hit some vulnerable countries as U.S. rates have risen again has started with similar weak links, but times have changed: there are fewer immediately obvious follow-on targets.

As for the EEM, the top 10 holdings makeup about 25% of the weight of the etf, with five of them listed in Hong Kong, Alibaba and Baidu also Chinese but listed in the U.S., Taiwan Semic which might as well be Chinese and the balance South Korea (Samsung), so basically when you are buying or selling EEM you are making a bet on Chinese economic dominance of South East Asia.

If I thought U.S. Treasury yields could go from 3% to 4% in the next year, I might be inclined to play for a decline in the EEM as the story might shift from Global Synchronized recovery to U.S. strength buoyed by tax cuts and sharper trade deals favoring the U.S. could put markets and economies like those reflected by the EEM on their heels.

The one year chart of the EEM seems to be quite challenged, in a well-defined downtrend from the multi-year highs made in late January and nearing important technical support at $45: 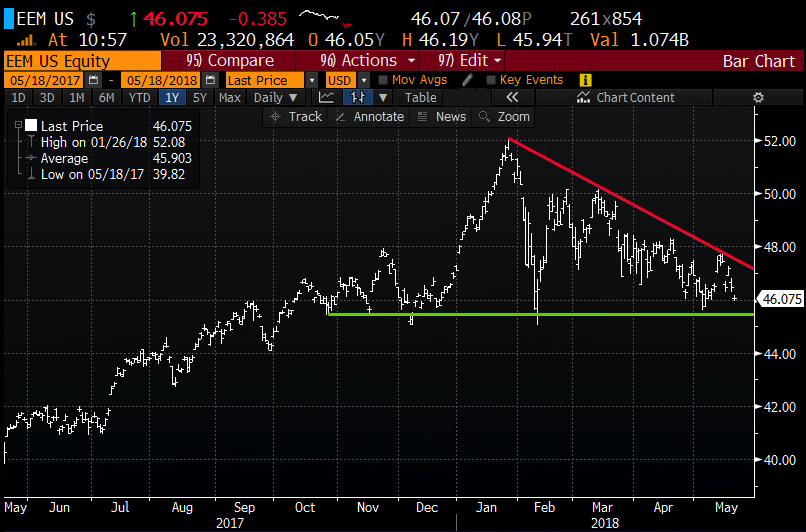 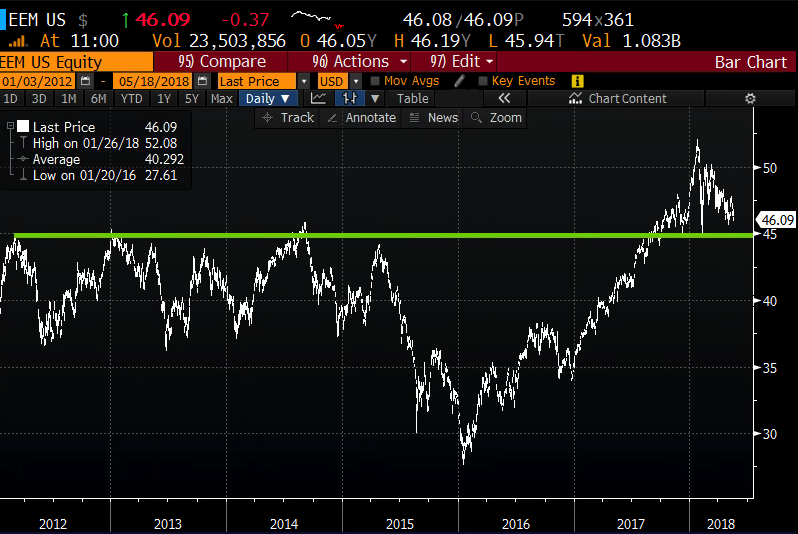 Short-dated options prices are still fairly well bid, with 30 day at the money implied volatility at about 18%, but given the rapid rise in U.S. rates and the nearly 4% bounce in the DXY in the last month, they are likely to stay bid above the high-end of the 2017 range near 16%: 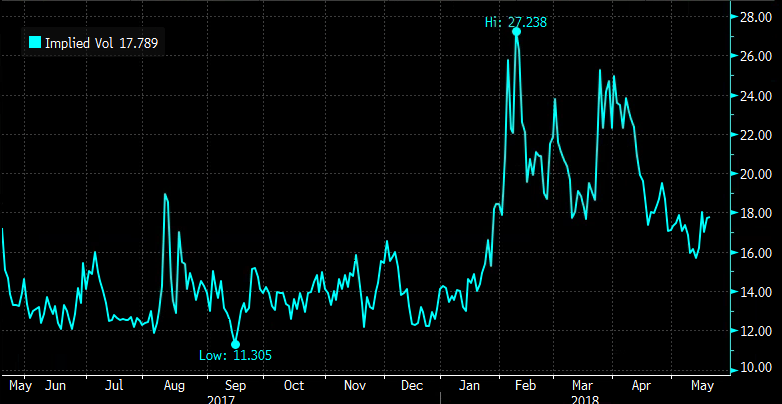 If the etf is at 45 or higher the short 45 put will expire worthless and you will own the Aug 45 put which should pick up some deltas with the stock’s decline that should off-set time decay (depending on how close to 45 the etf is).

Worst case scenario risks 80 cents, or less than 2% of the etf price if it is meaningfully above the current price or well below the strike price.

Rationale: this trade strategy plays for near-term consolidation above key support but helps finance longer dated puts that once we get to June expiration one could turn the August 45 put into a vertical put spread by selling a lower strike put and further reducing the premium at risk in the trade.